The Hunterian Society offers an annual award for an essay and presentation on a subject of relevance to John or William Hunter, or medicine in the 18th Century. This article is based on Emma Stapleton’s 2014 winning essay, which was inspired by a visit to the Hunterian Museums in Glasgow, and was accompanied by a comparative dissection of two human temporal bones, one using modern equipment, the other an 18th Century hammer and gouge. 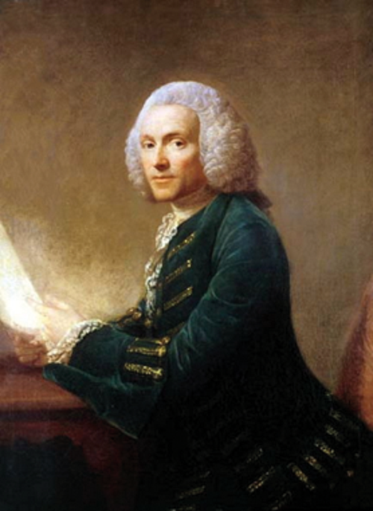 William Hunter (1718-1783; Figure 1) was an outstanding anatomist. Moving from Scotland to London in 1741, he established himself as a renowned anatomy lecturer, and was largely responsible for the guidance and training of his younger brother John. William became physician to Queen Charlotte in 1762 and helped deliver the future king, George IV.

“William Hunter’s dissections of the ear demonstrate an understanding of anatomy and physiology ahead of his time.” 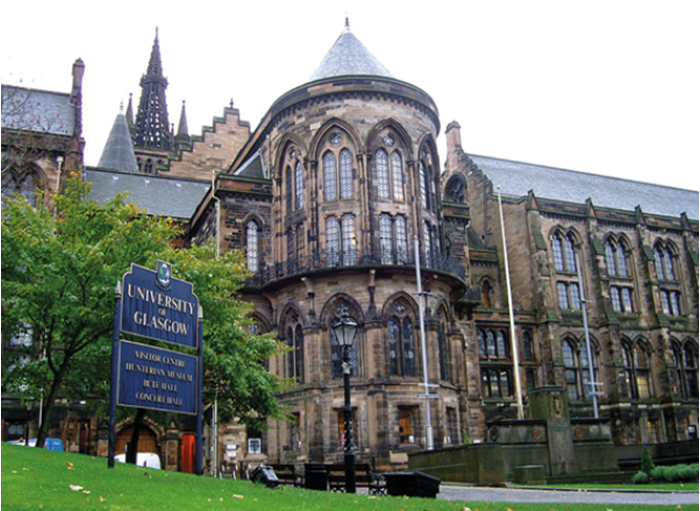 Figure 2: The University of Glasgow, housing the Hunterian Museums.

Hunter is well known for his work on bone and cartilage, and for his remarkable studies on the human gravid uterus. A passionate teacher of anatomy, he bequeathed over 3000 anatomical preparations to the University of Glasgow (Figure 2). Forty-five of these specimens are studies of the anatomy of the ear, and whilst little is mentioned in the literature regarding Hunter’s interest in the ear, a closer inspection of these preparations reveals that Hunter had a deep interest in this fascinating part of the human body; his discoveries demonstrating an insight and understanding of auditory function which was well ahead of his time.

Hunter’s specimens are his main legacy. He left little in the way of written records and did not publish many of his findings. The only known record of his lectures on the ear are Charles White’s lecture notes taken in 1752. In this article, Hunter’s preparations of the ear are examined, along with Charles White’s notes, in order to demonstrate that William Hunter not only had a remarkable foresight of auditory structure and function which was not fully understood at that time, but that he may also have identified important evidence of evolution of the ear, approximately 100 years before the publication of Charles Darwin’s Origin of Species.

Hunter prepared eight specimens of the external ear, 18 of the middle and internal ear, four of the foetal ear, and 15 of comparative anatomy. 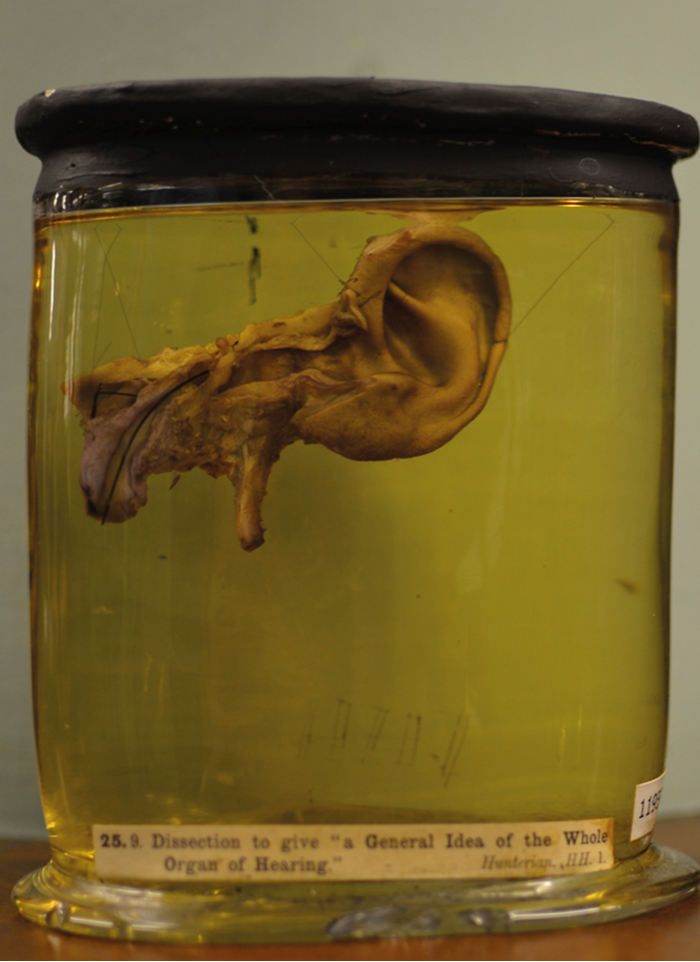 Figure 3: ‘Dissection to give a general idea of the whole organ of hearing’. (Hunterian Museum, University of Glasgow).

Perhaps the most important is his ‘Dissection to give a general idea of the whole organ of hearing’ (Figure 3). This demonstrates the external ear and Eustachian tube; the squamous and upper part of the petrous removed to give a view of the mastoid antrum, tympanic cavity, vestibule, cochlea, internal meatus and auditory nerve. The anterior wall of the external auditory meatus, tympanic cavity and Eustachian tube are cut away, leaving the tympanic ring and membrane and the ossicles. The incus, malleus, Eustachian tube, vestibule and carotid canal are marked. This might make an ideal three-dimensional learning tool for today’s anatomists and otolaryngologists.

“His comparative anatomical studies suggest that he understood evolution, 100 years before Darwin’s Origin of Species.”

Examination of cadaveric specimens is still considered the best method to acquire an appropriate understanding of the three-dimensional anatomy of the ear; this brings us to another of William Hunter’s legacies. In 1746, Willliam Hunter introduced the Parisian method of teaching anatomy at his school in London, allocating cadavers for students to dissect with supervision. 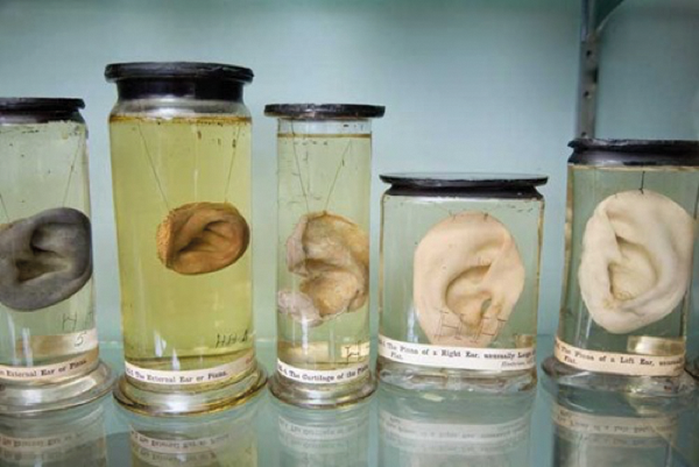 Charles White’s 1752 lecture notes describe Hunter’s explanation of the optimal shape of the pinna for collecting sound (Figure 4). The earliest scientific documents documenting the purpose of the pinna date from the 1870s, where its description as a ‘collector’ for sound is clarified in terms of the phenomenon of binaural hearing. They also describe Hunter’s explanation that the tensor tympani muscles “are alleged to pull the malleus irregularly forward from the incus, and by taking off from the vibrating motion of the bones to fit the ear, to receive weaker sounds, but these motions are merely conjectural” (Figure 5). 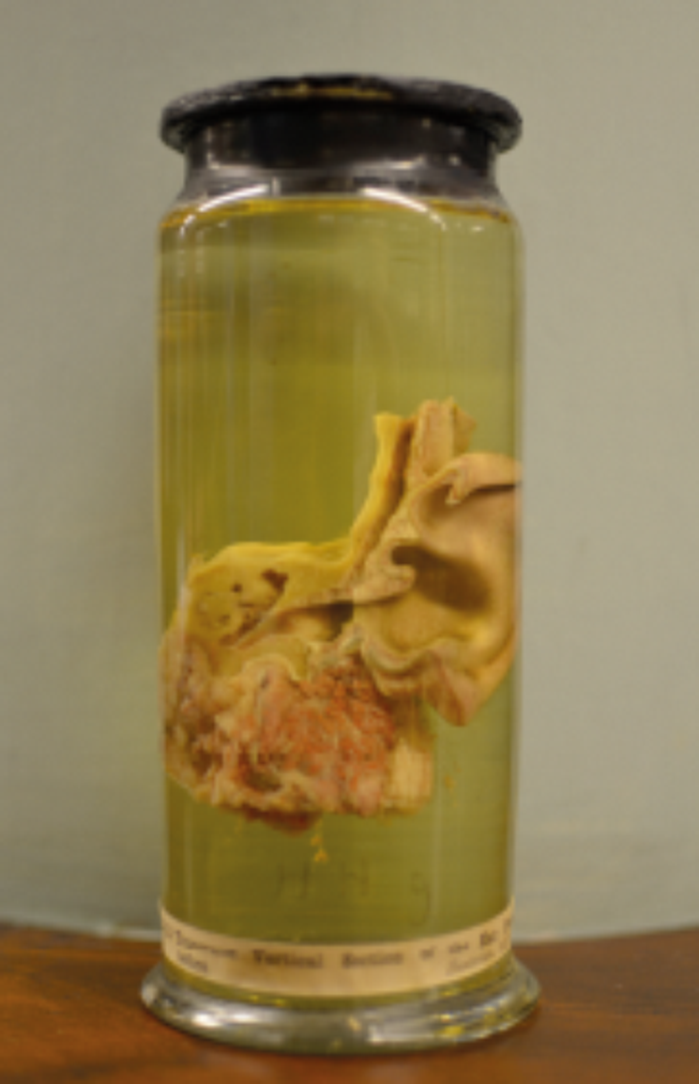 Further specimens display the middle and inner ear beautifully, clearly demonstrating the articulation of all three ossicles, the facial nerve, mastoid antrum, an intact tegmen tympani, and posterior canal wall. A plate of bone overlies the sigmoid sinus. On the internal side, the stapes footplate is seen through the vestibule, and there is a clear view of the lateral semicircular canal, cochlea and auditory nerves. These are dissections which an otologist of today would be proud to produce, yet whilst today’s surgeons have microscopes and fine, powered instruments for this purpose, William Hunter would have used a hammer and chisel to produce his specimens. His precision and skill would have made him a superb otologist and teacher in the 21st Century.

Another remarkable aspect of these dissections is that whilst temporal bone anatomy had been grossly described two centuries earlier, a complete description of the organ of hearing had yet to be produced. [Antonio Scarpa (1747-1832) published in 1789 his Anatomical Investigations about Hearing and Smell in which he described the detailed anatomy of the membranous labyrinth, and Alphonso Corti (1822-1888), the histologist, described the detail of the cochlea in 1851.] Hunter’s immaculate demonstration of cadaveric anatomy may well have been a first, and is certainly the only surviving specimen of such quality. That a man whose main interests lay elsewhere created these preparations over 250 years ago is remarkable; these specimens have immense value and relevance to the anatomists and surgeons of today.

Evolution of the ear

Examination of Hunter’s work on comparative anatomy reveals something perhaps even more impressive: that William Hunter may have identified evidence of the evolution of the ear. The concept that species change over time dates back to Greek and Roman times. Lamarque proposed the first fully formed theory of evolution in 1802, and Darwin’s Origin of Species was published in 1859.

“William Hunter’s precision and skill would have made him a superb otologist and teacher in the 21st Century.”

Hunter’s specimens demonstrate that mammals possess three ossicles, “those of the monkey most like the human”. A pheasant ear is clearly dissected and described. A preparation of “the vestibule and semicircular canals of a turtle” clearly notes that “the auditory nerve is attached to the vestibule”. The inner ear of a codfish demonstrates an auditory nerve overlying the vestibule and semicircular canals, with a bulb at one end which Hunter considered representative of a primitive cochlea. Several other fish ears are similarly dissected, signifying Hunter’s curiosity on this topic.

The author would like to thank the Hunterian Museum, University of Glasgow; Professor Chris Raine, Bradford Royal Infirmary, and the Hunterian Society.

Emma is an ENT trainee based in Yorkshire. She has an interest in medical history and a love of all things otological.

William Hunter is best known as an anatomist and obstetrician; his contribution to the field of otology is overlooked. Hunter’s skills in dissection are apparent from the quality of his immaculate specimens. His introduction of the ‘Paris manner’ of cadaveric dissection is the basis for the method by which today’s otologists are trained. It is a tragedy that Hunter did not publish his work, as it is clear that he had a great understanding of the anatomy and physiology of the ear which was ahead of his time. His dissections also demonstrate insight and interest in comparative anatomy and evolution of the ear – a topic he seemed close to understanding, but which did not reach the literature until over 200 years later. William Hunter would have made an outstanding 21st Century otologist. His precision and skill in dissection, his aptitude and talent in teaching, and his inquisitive mind in making new discoveries, are all qualities which are highly valued today.