Wilhelm Fliess, a Berlin rhinologist, was for many years Sigmund Freud’s closest friend and confidant. He was born in Poland in 1858. In 1887, he visited Vienna for postgraduate studies, and met the famous psychoanalyst, Freud [1]. They were immediate friends perhaps because of their common belief in the importance of sex in the cause of disease. Freud believed sexual repression gave rise to mental illness and Fliess had a similar idea about nasal pathology.

Fliess’s book The Flow of Life [2] had three basic theories: firstly, that the nose and sexual function are inextricable; secondly, that all animal life (including humans) are bisexual; and thirdly, that animals all have innate periodicity. He postulated a male 23-day ‘menstrual’ cycle, and just as the female 28-day cycle is controlled by the ovaries, he centred the male period specifically on the nasal turbinate. 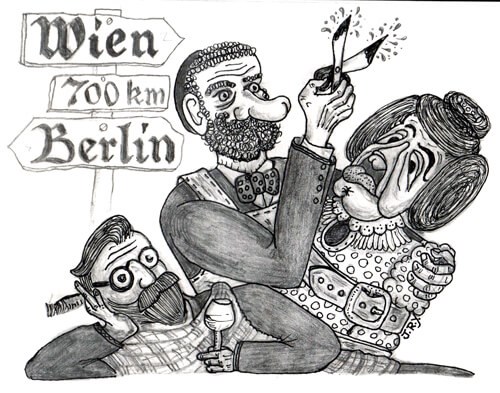 Freud asked Fliess to undertake nasal surgery on some of his psychological patients. Fliess had three important nasal treatments for this type of case. Minor problems could be dealt with by the simple expedient of painting the inferior turbinate with cocaine paste. Intermediate cases were treated by cauterisation and serious masturbators were subjected to turbinectomy [3].

Freud himself was a well-known hypochondriac and in early February 1895, he travelled from Vienna to Berlin to undergo nasal cautery by Fliess. He felt so much better, particularly with respect to his angina that he decided to send a female patient to the German capital for Fliess’s opinion.

Her exact complaints are not clearly recorded, although it has been suggested that she suffered from menstrual problems. In Freud’s copy of Fliess’ book, The Causal Connection between the Nose and the Sexual Organs, [4] there is a marked passage that reads, “Women who masturbate are generally dysmenorrhoeal. They can finally be cured by an operation on the nose, if they truly give up this bad practice.” Fliess examined her nose, spotted a suspicious area on her right inferior turbinate, performed a turbinectomy and sent Emma back to Vienna by train. Things then went disastrously wrong and she very nearly died.

Two weeks later, she developed osteomyelitis of the maxilla (swelling, foetid odour and bleeding). Freud’s Austrian pal took her to theatre, where he removed a stinking ribbon gauze pack and staunched a torrential haemorrhage. Poor Freud fainted and had to be revived with cognac. Emma was more stoical and made a jibe about the weaker sex. She survived after a long and stormy postoperative period during which ligation of the carotid was considered but had a hideous facial deformity over the right cheek. Amazingly a year later, Freud wrote to Fliess that he thought that, she bled out of longing (- for him!) [5].

This eccentric rhinologist however, is thought to have exerted a profound influence on Freud’s conception of human development, which is often undervalued [6].