Medical journals have a fascinating history. One early journal, The Lancet, was founded in 1823 and its first Editor, London surgeon Thomas Wakley (1795-1862), had a turbulent life. He lived in an era where quackery was rife and where the medical ‘establishment’ was associated with corruption and body snatching, with no regulation of standards. He was involved in political debates and also in ruinous legal cases involving prominent doctors. His work led to the Medical Act of 1958, which instigated the forerunner of the GMC.

As Jones says, “His courtroom dramas and his untiring pursuit of honesty and probity were largely responsible for the reform of English medicine in the mid-19th century” [1]. The Lancet has continued as a force in journalism under the leadership of Richard Horton, with notable work in promoting global medicine and associations with many contentious issues in healthcare (e.g. homeopathy, arms, smoking and the MMR vaccine controversy) [2]. 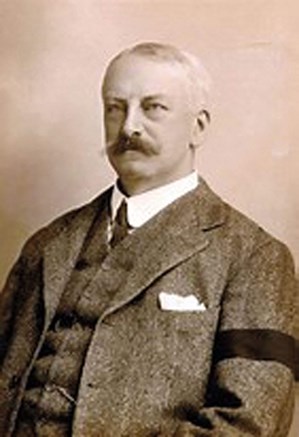 There have been a total of 20 editors of the journal since 1887, often with a London connection but recently from further afield. The longest serving was Walter Goldie (‘Wally’) Howarth (1879-1962), from St Thomas’ Hospital, London, who had studied with Killian and Brüning. He made a significant contribution to sinus surgery - his eponymous incision is well known - and served from 1929-1961, working as a sole editor, following on from Logan Turner.

Morell Mackenzie has been the subject of many articles and lectures, but the principal editor and prime mover in starting the JLO was Norris Wolfenden (pictured), a Lancastrian whose father was a Justice of the Peace and twice Mayor of Bolton. He studied natural science at Cambridge and clinical studies at St Bartholomew’s before lecturing in physiology at Charing Cross [5,6]. He worked with Morell Mackenzie at the Hospital for Diseases of the Throat, Golden Square, London (later to be part of the Royal National Throat, Nose and Ear Hospital).

He suggested the need for an English journal dealing with the specialty and asked for Mackenzie’s help, as he had influence and connections. Wolfenden published a review of 103 collected cases of total laryngectomy for cancer: only 8.5% had their life extended for a year or more [7]. His musicianship extended to conducting the London Hospital Orchestra. He retired early, pursued an interest in marine life and then emigrated to Canada to grow fruit.

Medical journals range from vehicles for commercial interests to cutting-edge science or clinical research. Their number has increased such that no clinician can keep abreast of all of them, even within a narrow discipline.