The fatal illness of Frederick the Noble
By John Riddington Young

Sir Morell Mackenzie is acknowledged as the ‘Father of British Otolaryngology’. He was the leading throat specialist of his time and one of the founders of the Journal of Laryngology and Otology in 1887. He studied in Paris, Vienna and Budapest where he learned the use of the newly invented laryngoscope under Johann Czermak.

In 1862, he returned to London and won the Jacksonian prize at the Royal College of Surgeons for an essay on the ‘Pathology and Treatment of Diseases of the Larynx’. In 1863 the Hospital for Diseases of the Throat in King Street, Golden Square, was founded, largely on his initiative [1]. He rapidly became recognised as a leading authority on laryngology throughout Europe, acquiring a huge and lucrative practice.

Then in May 1887, his whole life changed. He became the most controversial doctor in Europe. During the ensuing 18 months, he was knighted, decorated with the German Grand Cross of Hohenzollern, vilified, threatened and nearly imprisoned [2]. 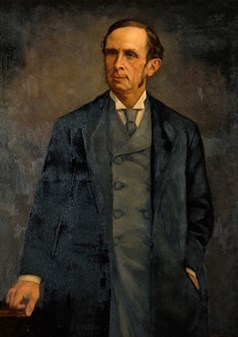 He became involved in a bitter international controversy over the death of the Kaiser. Queen Victoria’s son-in-law (at that time the Crown Prince of Germany) had been stricken with a serious throat disease, which had been diagnosed by the German specialists as throat cancer, and he had been told that the only treatment was surgery. Laryngectomies had been done since 1873, but survival rates were dire (6%) [3]. So great was Mackenzie’s reputation in Europe, that the Queen had requested for him to give an opinion.

Mackenzie disagreed with the Prussians and insisted that the disease was not demonstrably cancerous and therefore that a dangerous operation was unnecessary. Ironically, he had based his opinion absolutely on a biopsy made by the world-renowned German Pathologist, Rudolf Virchow. It was clearly a difficult case with great political implications. As it was, Morell Mackenzie's opinion was followed: the Crown Prince came to England, under his treatment, and was present at Victoria’s Jubilee celebrations.
By November, however, the imperial voice box had become worse and upon further examination, Morell now confirmed it as cancer. Virchow’s pathological report had been wrong. Frederick became Kaiser Frederick III, (known affectionately as ‘Kaiser Fritz’) but died the following year. An acrimonious international controversy over his death erupted between Mackenzie and the German doctors.

All this talk nowadays about evidence-based medicine deals with the interpretation of diagnostic test results. That is just what Mackenzie did. Was the fault therefore the English surgeon’s or the German pathologist’s? Morell Mackenzie was pilloried for it by the German medical world. They published an account of the illness, vilifying Mackenzie [4], who promptly replied by writing a best-selling book, entitled The Fatal Illness of Frederick the Noble (1888). It was so successful that the publication then earned poor old Sir Morell censure from the Royal College of Surgeons, since in those days it could have been considered as advertising. Mackenzie had acted in good faith for his patient, believing the findings of the most eminent pathologist in the world at the time, Professor Rudolf Virchow.