The golden nose – reshaping the nose 100 years ago 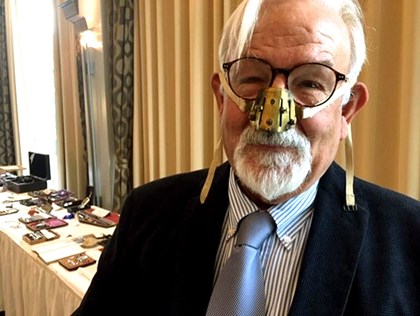 Wolf Lűbbers (with the golden nose).

Who with a crooked nose would not embrace the chance to go to bed in the evening wearing a surgical device and wake up the following morning with a straight one? And all this without pain, with no anaesthetic, no invasive surgery and no prohibitive cost?

This is what the Zello Universal Nose Shaper claimed to achieve more than 100 years ago, when the Zello-Punkt Model 21 came onto the market in 1894.

Clearly, a century ago patients were complaining of cosmetic nasal problems, and potato, humped, crooked or saddle noses had to be endured or carried with humility. That is until an instrument resembling a piece of medieval armour called Zello Punkt brought a ray of hope.

A certain royal councillor, Professor G von Eck, patented his invention for straightening noses in 1894. He suggested that his Zello Punkt nose shaper should be worn at night and the patient’s nose was supposed to be pressed into the desired shape by adjusting a number of grub screws [1]. 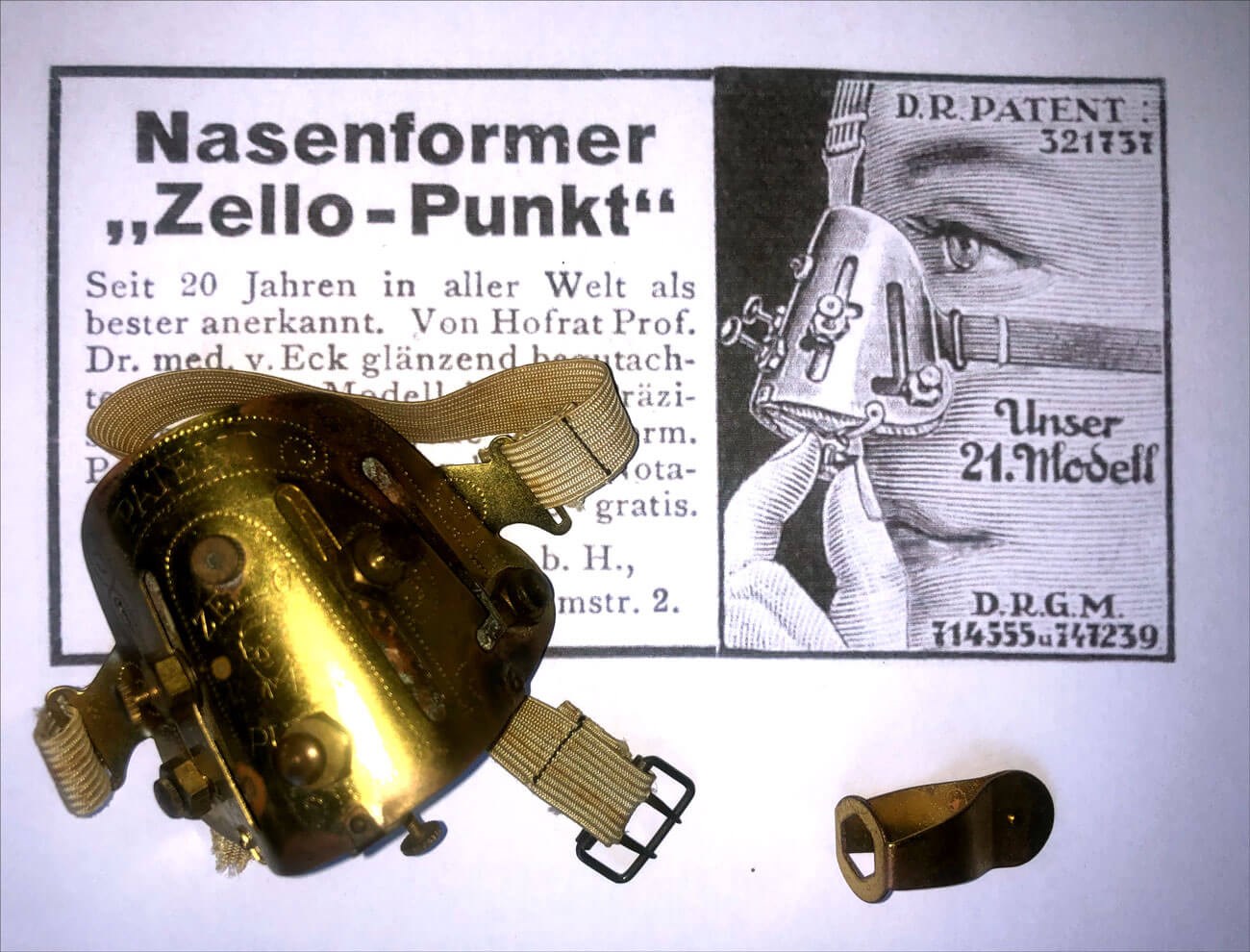 The universal nose shaper Zello-Punkt Model 21 consists of an outer sheet of moulded brass, which approximates to the shape of the nose pyramid (Figure 1). There are four slots on the lateral aspect of the device, two on either side, through which adjusting screws can be altered after any necessary rotation of the inner plates by means of a special wrench. There is also an adjustable plate on the front.

A thin leather cushion sits on the flexible plates on the inside of the appliance and this can be pressed in or pulled out by either tightening or loosening a total of six screws.

An elasticated rubber band, passed around the back of the head, fixes the gadget on the nose. Engraved on the front of the device are instructions advising the patient “How to Wear”. From the user’s manual:

“The Zello-Punkt Universal Nose Shaper should be worn as often as possible, at night and for several months, if you want complete success. Before the nose shaper is put on, the nasal skin should be rubbed with the Punkt Wax specially prepared for this purpose. In this way the nasal cartilages are softened and made supple; this accelerates the reshaping of the nose enormously.”

Similar to the well-known Wilhelmine beard bandages, this “discreet aid” was sold in hairdressers’ shops and pharmacies.

It is very doubtful whether the universal nose shaper ever achieved any cosmetic success. Any ‘effect’ of the adjustable pressure points depended only on the strength of the elasticated band worn around the head. The subcutaneous tissue can be compressed for only a few minutes.

When I experimented by wearing it myself, the only results were sleep disturbances and facial injuries from the sharp-edged metal.

One thing, however, must have given immense pleasure to the users. They must have enjoyed tremendous respect from their bedfellows: after all, they were the “people with the golden noses,” notwithstanding whether their nose was crooked or straight [2]!