Hippocrates himself is known to have said that when a woman’s menses are due, but instead of the usual vaginal menstrual flow, she has a haemorrhage from the nose, then this is a sure sign of pregnancy [1]. 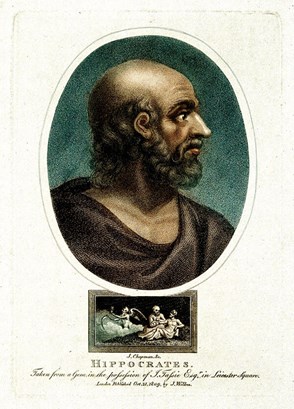 The idea was that nature searches for another exit route for the menstrual blood, and Schurig in 1729 collated a mass of case reports including not only epistaxis, but vicarious menstruation through the ears, skin, gums, salivary glands, tear ducts, crown of the head, fingers, feet, stomach and lungs, bladder, bowels, back, navel, and even a cut on the hand [2].

Remember disease was thought to result from too much blood or plethora and one of the commonest treatments was phlebotomy. Each month, menses were thought to be the natural way for women to redress the balance of humours by purging this build-up. Indeed a 17th century poet/physician, Dr John Collop, albeit sarcastically says:

The Courses Nature doth in Women take
To open veins, shall we in men forsake?
Where Nature dictates, who will not submit?
She keeps her Monthly terms to plead plead for it [3].

The best story of vicarious menstruation has to be the tale of poor 21-year-old Mary Murphy, a patient at Sir Patrick Dun’s teaching hospital in Dublin:

During her stay she missed a menstrual period, and was shortly afterwards attacked by haemorrhage from both ears, which was repeated at intervals of from three to five nights, each attack lasting some hours. Very often from 15 to 20 ounces of blood were collected which did not coagulate, neither did blood taken from the arm.

Mary was treated by ‘strengthening her system,’ with foot baths, purgative medicines, and the application of blood-sucking leeches. The leeches were applied behind her ears and on her inner thighs. These upper ones took away the excess blood before it came out, and the lower ones diverted it back down her body to near her vagina (where it should have come from in the first place) [4]!

A strange form of vicarious male menstruation took place in the Sambian tribe of Papua New Guinea, where epistaxis is self-inflicted by the husband by stuffing foliage up his nose, when his wife is menstruating [5].

It would, I feel, be a great shame not to mention the singular case, reported in 1780, of male vicarious menstruation. Twenty-five-year-old French miller, Jacques Sola, bled monthly from his right little finger. There were occasional months when he did not have his period. In 1764, he had been very ill with dysentery and ‘peripneumonia,’ because the menstrual blood flow from his pinkie had been blocked by sitting too long in the shadow of his windmill. This was cured by phlebotomy to relieve his plethora. Two years later Jacques developed haemoptysis and a cough, again caused by his finger not bleeding. His physician said he could not help but wondering if in time, regular flows would cease and the miller would have in effect a menopause [6]. (Would this constitute an andropause?)