Among the many highlights of Virtual BACO International was the entertaining Opening Ceremony, and the chance to see the inaugural BACO Awards presented. We also got to hear from the first ever BACO Awards winners, and commemorate the achievements that had earned them a place at the top of their respective categories. This was a fantastic way to highlight excellence across our specialty, and hopefully the first of many BACO Awards to come!

Delegates also celebrated the first recipients of two new special honours designed to recognise outstanding contributions to ENT, and to medicine and surgery more broadly. President’s Medals were awarded to His Honour Simon Barker QC and Mr Stephen Evans for their work benefiting ENT. BACO Master’s Citations were awarded to seven recipients for achievements in their respective medical and surgical fields. A full list of awardees and their accomplishments can be found on the BACO website. 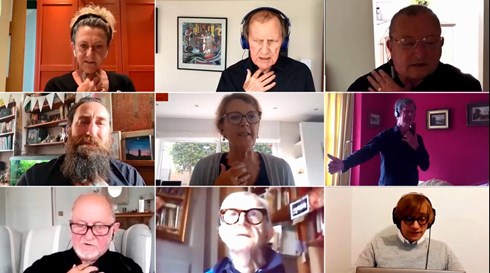 The Shout at Cancer Laryngectomy Orchestra entertained delegates with the rhythmic Indian singing technique of konnakol.

Along with the BACO Awards and special honours, the Virtual BACO International opening ceremony saw a number of memorable elements. James C Denneny III, Executive Vice President and CEO of the American Academy of Otolaryngology-Head and Neck Surgery, spoke of BACO’s partnership with the AAO-HNS. Celebrated Otologist, Navnith Shah, remembered the past BACOs he had attended, including the very first one, held in London in 1963. But the musical interludes made perhaps the greatest impression. The Shout at Cancer Laryngectomy Orchestra entertained delegates with the rhythmic Indian singing technique of konnakol, to great acclaim. And bringing the ceremony to a close, ENT surgeons Chris Aldren, Michael Kuo and Declan Costello performed a recital of Richard Strauss' Morgen! – a moving and uplifting way to open Virtual BACO International!