Congratulations on being elected BRS President 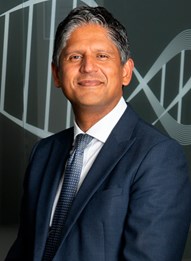 Mr Raj Bhalla has been elected next President of the British Rhinological Society following a recent vote by the membership. He works as a Consultant Rhinologist at both Manchester Royal Infirmary and Salford Royal Hospital. He will take up a position on the executive council immediately as President-Elect, and then formally take on the role as President at the next BRS annual meeting in Sheffield in May 2021. Rhinology in the UK is riding the crest of a wave and has never been a more popular subspecialty choice than currently. From sinus disease and surgery to rhinoplasty, and from nasal reconstruction to skull base surgery: colleagues and trainees have a vast spectrum of disease and highly specialist surgical techniques to pique their interest and to capture their imagination. UK rhinology has transformed over the last two decades. During his tenure, Raj aspires to see the continued growth of the society and to nurture its ever-increasing appeal to junior members, and will promote the best of UK rhinology talent, both clinical and academic.