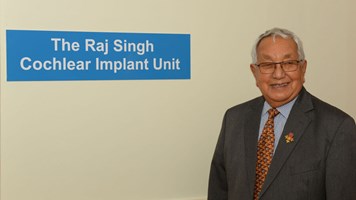 Raj Singh was an ENT Consultant in NHS Ayrshire & Arran from 1969 to 2000. He established the Cochlear Implant Programme in 1989, initially with the support of the Help-to-Hear Fund, a charity he established through extensive fundraising.

In 1991, the service was consolidated with funding from the National Health Service (NHS). In 2008, it became the Scottish Cochlear Implant Service.

Raj was awarded an OBE in 1994 for his cochlear implant work before retiring in December 2000. If it were not for his hard work, drive and enthusiasm, the service would not be where it is today – both in terms of its location and the number of patients it has benefitted.

The Scottish Cochlear Implant Programme at University Hospital Crosshouse, near Kilmarnock, provides a service for profoundly deaf adults and children. The National Services Division (NSD) of NHS Scotland commissions NHS Ayrshire & Arran to deliver this service, which is run by a dedicated, multidisciplinary team of staff. The service at Crosshouse has gone from strength to strength and is now supporting over 1600 cochlear implant recipients from across Scotland.