Audiology Services in Diverse Communities: A Tool to Help Clinicians Working With Spanish-Speaking Patients and Families
Reviewed by Raúl García-Medina

As a bilingual audiologist (Spanish-English), I have found this book to be a bridge between the two languages in the audiological world. It is a resourceful niched book that enables the practising audiologist dealing with Spanish-speaking adult and paediatric patients to easily interact with them during consultations and to better culturally understand the Hispanic/Latino population, with a focus on audiological service provision.

The book acts as a language tool aid, with English and Spanish versions literally translated of the various hearing evaluation tests, hearing devices, anatomical part of the auditory system, test instructions for patients, tips for the clinician when testing Spanish-speaking patients, standardised tests and questionnaires (validated in Spanish) and a quick guide to find the correct audiology term in Spanish. It has been written with the North American market in mind, since almost 20% of the overall population in the US is Hispanic or Latino, and it aims to address the diversity of this particular sector of the US population, raising awareness of the socioeconomic, cultural and health and healthcare disparities in this minority group. However, it could also be utilised by the Spanish-speaking audiological clinicians dealing with English-speaking patients as well. 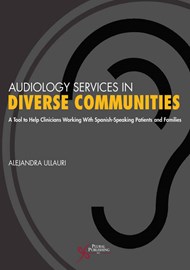