Tinnitus? There’s an app for that
Compiled by David Pothier and Carolyn Falls

Chronic tinnitus. It is difficult to treat and can have a debilitating impact on those who suffer from it. To date, there is no treatment that is guaranteed to make tinnitus go away, though there are several existing treatments that aim to lessen the effects of tinnitus by making it less noticeable and less distressing.

In the absence of a clear path to relief, it is not uncommon for tinnitus sufferers to turn to the internet for guidance. Many tech-savvy tinnitus sufferers will seek out apps that are specifically designed for tinnitus. I was curious about these apps that I’ve seen patients using it in the waiting room and decided to take a closer look at what’s available.

Most of the available tinnitus apps are primarily sound generators, though many offer additional features, such as tinnitus matching, hearing threshold estimation, and tinnitus education. Here’s a small sample of what’s available:

Whist is an app that aims to provide relief from tinnitus by allowing users to create customised sound therapy according to their own preferences. Whist invites users to identify the individual sound characteristics that provide the most tinnitus relief and to try different sound therapy approaches. The app provides users with basic education related to the different sound therapy methods. Within the app, there are also warnings to ensure that it is used at safe listening levels. Whist is free to try but only the paid version ($2.79 USD; Apple App Store, Google Play) will save your previous settings.

For users who prefer to listen to sound generators that are also relaxing, the myNoise app may be a good choice. The app contains a variety of noises with titles that include, ’spring walk’, and ’rain noise’. Simpler options are also offered, including white noise. Using frequency-specific sliders, the properties of the noise can be further customised to emphasise certain frequencies over others, according to user preference. Sounds can also be combined and saved for even further customisation. The most popular generators come standard with the free app download. Other custom sounds can be added, though many have to be purchased (Apple App Store).

For tinnitus sufferers who have hearing aids, several of the manufacturers are now releasing their own tinnitus apps equipped with sound generators. These manufacturer-specific apps vary in what they offer but have the added benefit that they can be set up to stream wirelessly to the patient’s hearing aids.

A common complaint from tinnitus sufferers is that the options they are given are very limited or non-existent. Tinnitus apps are a nice, inexpensive way to introduce patients to sound generators. 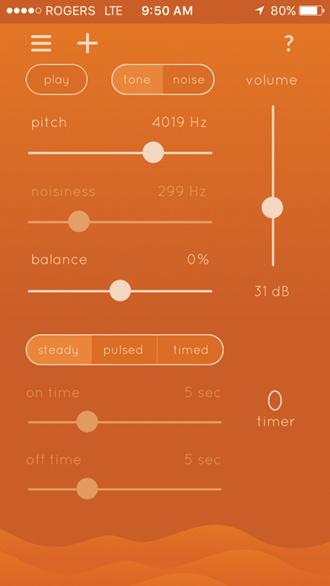 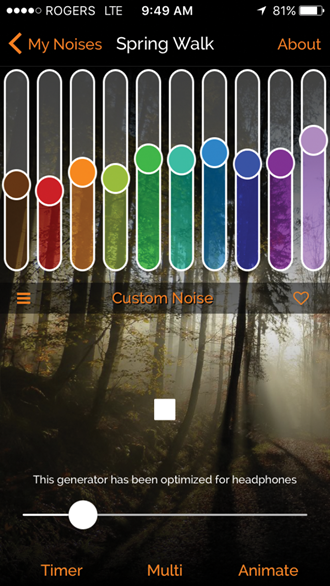