#BecauseIhearIlive – an international message from Smiling Crocodile
By Dagmar Herrmannová

There are 34 million children worldwide afflicted by disabling hearing loss, 60% of whom are suffering from hearing loss due to preventable causes [1]. This article is an account of the Smiling Crocodile Charity, founded in 2009 by Dagmar Herrmannová, who has worked for nearly 20 years internationally in the field of cochlear implant rehabilitation and complex needs education. Smiling Crocodile supports children with hearing impairment and complex needs internationally.

From Prague to the Punjab

Smiling Crocodile was founded in Prague where it has established special educational resources for children with hearing loss. Further afield, the charity has helped children across several continents including Malawi, India, Russia, Kazakhstan and Jordan. Some of these children live in slums, orphanages or on the street. The impact of being born with hearing loss in these countries is huge: discrimination, exclusion from society, and often no access to education or employment.

The reasons for this arise not simply from poverty or lack of facilities but may also stem from a cultural basis too. In some African countries, traditional beliefs may lead to families being shamed, with the deaf child hidden from view or dangerously neglected [2]. Mothers of deaf children may be stigmatised, or families broken up.

“Since 2016, the organisation has also been active in certain African countries, supporting hearing impaired children in poverty, their families and centres for the deaf”

This is indeed a big challenge. Nonetheless, families and communities can be educated about hearing loss, its causes and treatments with successful outcomes. These children can be helped further with screening programmes, education, hearing aids and even cochlear implants. Fortunately, charity and government programmes are slowly improving access in some previously isolated areas. Sadly, all the efforts of these agencies would likely fail without the appropriate rehabilitative intervention. This is where the work of Smiling Crocodile can and does make a difference.

Smiling Crocodile in the field

In India, Sri Lanka and Bangladesh, Smiling Crocodile has provided funding for poor children with hearing aids or cochlear implants to attend rehabilitation centres and clinics. This is to enable them to regularly attend the necessary therapy sessions, assessments and treatments, thus allowing them to develop their listening skills and speech. Consequently, they are enabled to attend school and integrate into their communities.

Smiling Crocodile also supports rehabilitation centres and clinics by funding equipment. One such example is the mobile audiology clinic – a van with audiological equipment and staff which travels to areas with inadequate access to healthcare so children can be tested and receive rehabilitation. 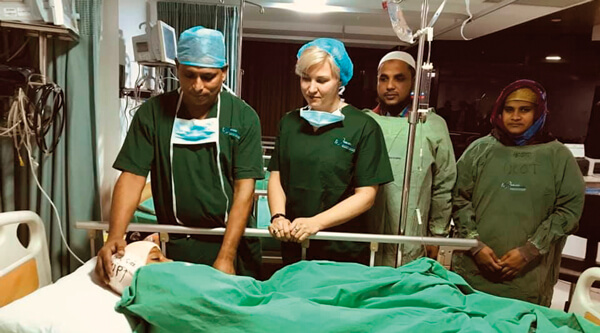 With Dr Delwar from Military Hospital, Dhaka, and his CI patient on the day of the surgery.

Since 2016, the organisation has also been active in certain African countries, supporting hearing impaired children in poverty, their families and centres for the deaf. The Smiling Crocodile project has helped around 700 children and their families, and more than 30 centres so far.

Smiling Crocodile could not provide these vital services without the generous donations from sponsors such as MED-EL who, in recognition of her work, have employed Dagmar as Senior Education and Special Projects Manager since 2011.

“The fact that around 13.7 million people in the country are affected by hearing impairment leads to serious economic, social, educational and vocational problems”

Another important mission of Smiling Crocodile is to raise awareness about the conditions endured by hearing impaired children who live in poverty. It seeks to highlight that everyone has a right to hear regardless of their economic or social status and that everyone deserves a good quality of life and to be accepted as an equal part of society. And what better way to spread this message than music?

Because I hear I live is the song at the heart of an International Campaign to raise awareness about the lack of access hearing impaired children in impoverished regions have to services and education. The anthem, containing the message that everyone has the right to hear, is available in nine languages: English, Russian, Arabic, Chinese, French, Chichewa, Tamil, German and Bengali. The song in its various languages is performed as a duet by Czech Pop Star Milan Peroutka together with a cochlear implant user vocalist or other professional well-known singers who are ambassadors of the deaf.

#BecauseIhearIlive will be performed internationally at music festivals, conferences and other events as well as featured in a social media campaign which includes YouTube videos, posters and short documentaries. The Smiling Crocodile Charity Tour 2020 was due to start in Malawi in April, with a performance of the anthem by local celebrity, Faith Mussa, in Chichewa. However, due to the outbreak of the COVID-19 pandemic, the tour has had to be postponed.

An international documentary including interviews with children, parents, experts, surgeons and health ministers is also planned in 2020. 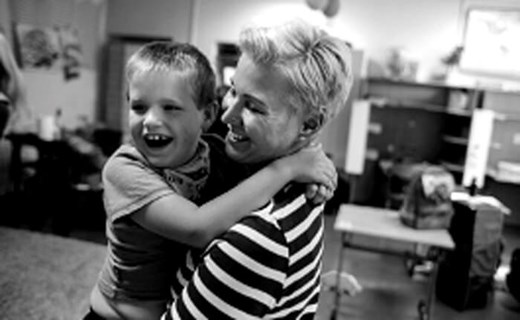 Dagmar and Lucas, a boy with complex needs from Smiling Crocodile School in Prague. 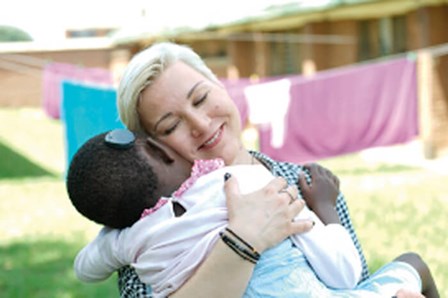 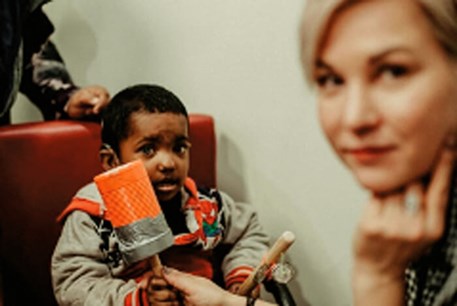 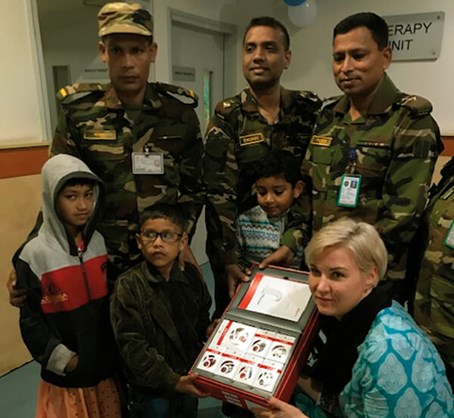 The CI team from Military Hospital Dhaka, Bangladesh, and their patients. 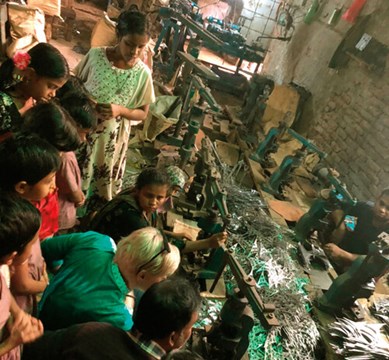 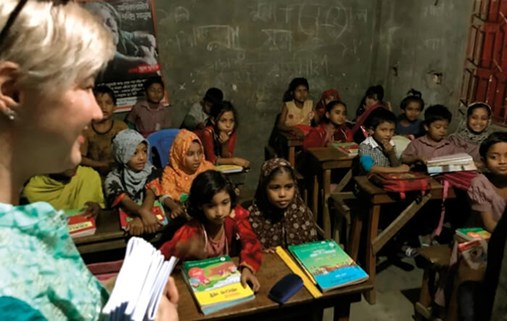 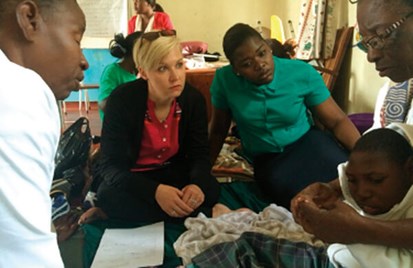 Children with complex needs at a hospital in Tanzania. 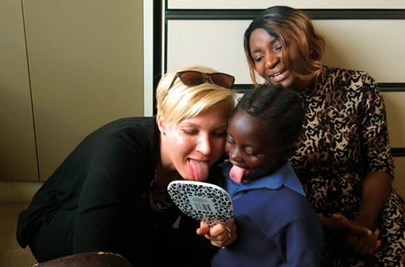 CI user from Tanzania during the therapy session with Dagmar Herrmannova. 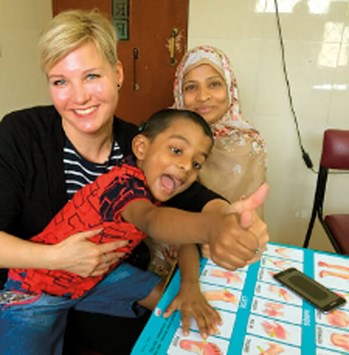 CI users from Chennai, India, after their therapy session. 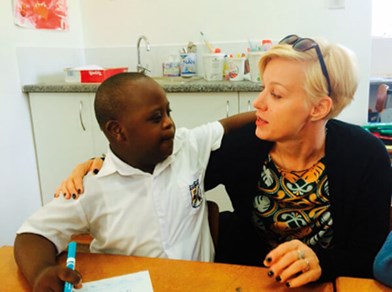 For further information or to make a donation to Smiling Crocodile visit:

‘Because I hear I live’ is an excellent initiative by Smiling Crocodile. I have been associated with Smiling Crocodile since its inception in India. It has transformed the lives of many underprivileged children who have difficulty with post cochlear implant rehabilitation. It has also supported children by providing accessories and spares required to sustain the consistent use of device. More recently, I have worked with Smiling Crocodile creating an anthem in Tamil: Because I hear I live. This was covered and appreciated by the local media. This anthem has highlighted the importance of hearing and is helping break the barriers caused by hearing loss in our society. It has also motivated parents to make decisions to provide hearing for their children. Our team, led by Dr Mohan Kameswaran, has great admiration for Ms Dagmar Herrmannová for her indescribable noble service.

Bangladesh is the eighth most populous country in the world, with 163 million people. The prevalence of disabling hearing loss in Bangladesh is 9.6%, with 4.5% of them having sensory neural hearing loss. Hearing devices, including cochlear implants, are necessary for 4-6% of the population. The fact that around 13.7 million people in the country are affected by hearing impairment leads to serious economic, social, educational and vocational problems. Dagmar Herrmannová and her Smiling Crocodile team extended their kind support to train our trainers, especially rehabilitation experts, in supporting poor children. They do this by donating various equipment and therapy instruments as well as providing the campaign, #BecauseIhearIlive, in Bangladesh. Her tremendous support helps the deaf-mutes enter the world of sound from the silent, dark world. As a result, the deaf children will be able to add to the development of the society and country as well.

Declaration of Competing Interests: Dagmar Herrmannová is employed by MED-EL. Whilst MED-EL is the main sponsor of the Smiling Crocodile, it is not a MED-EL charity.