In conversation with Dr Helen Bevan: Approaching change in the NHS with a new mindset
Interviewed by Rosanna Hunt

Dr Helen Bevan has been a leader of large scale change in the English National Health Service (NHS) for more than 20 years and was recently recognised as one of the 60 most influential people in the history of the NHS. I interviewed Helen to hear her story and gather some practical actions for clinical leaders who want to achieve change in ENT and Audiology. Helen recently co-authored a new White Paper – The new era of thinking and practice in change and transformation: A call to action for leaders of health and care. The paper is full of ideas, actions and references that clinical leaders can take to enable change in the new era. 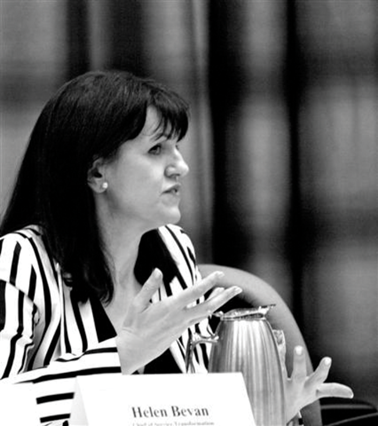 Helen, you are a source of energy and inspiration for change. How have your approaches to change developed over the past 20 years?

When I first joined the NHS in the 1980s, I’d been working with all sorts of methods of improvement in the education sector; such as process mapping, value streams and Total Quality Management. So, when I joined the NHS in 1991, I came with a lot of tools and experiences from other sectors that really weren’t being used that much in healthcare at the time.

My first big job in the NHS was at Leicester Royal Infirmary leading outpatient change programmes. One of the very first things I did early on was to spend time in Ear Nose and Throat clinics and analyse what was happening with the team. A really early highlight was going to a clinical leaders’ meeting and rolling out a big map of the patient journey through the hospital. What this showed was the patient journey from start to finish – from when they saw their general practitioner (GP) - to receiving treatment. It showed that at that time (in 1993), a patient’s journey through the outpatient department took about 9 months to get to a point of treatment. There were around 200 steps in the care process and the patient got 12 minutes of clinical care. Why did it take us 9 months to give somebody 12 minutes of clinical care?

At the time, people weren’t thinking in this way or using these techniques and we were able to make some really great change happen.

Since 1998, I’ve worked at a national level on change in the NHS. Initially, I worked on waiting times in the NHS, cancer services and people with heart disease. Many of the classic improvement methods that we worked with in the NHS were very good – we’d go into a service and look at it very technically and rationally and analyse the steps in the process and how those could be changed. We’d collect data on what was happening and then we’d design a new service together with people who worked in the system. 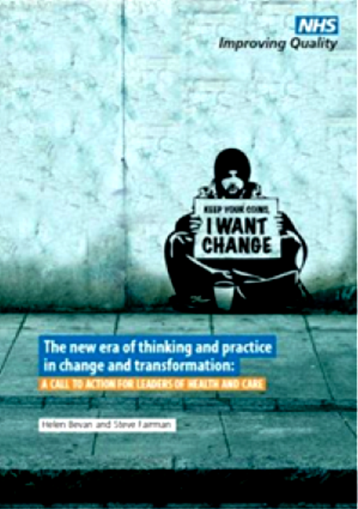 But these tools and approaches only took us so far because they were based on the idea that you could replicate change. So, if someone in Rochdale was known to be doing best practice in audiology, we’d take that best practice and try to make it work in Bournemouth or Cornwall, but it was really hard to replicate. The more I was involved in change on a really big scale, the more I could see that the rational, technical, data driven approaches were not enough. We needed to focus on emotional engagement and connect with people’s values and use that as a tremendous energy for change.

I really respect many of the traditional tools and analytical ways that we go about change but they are not enough. In the future we will need to connect with a bigger purpose for change and also with people’s values. We will need to get people getting involved in change because they want to – because it connects with their values and who they are in the world, not because of a performance agreement or a contract or a financial incentive.

I’m fascinated by these new ideas for achieving change. What can clinical leaders do to connect with people’s values and building energy for change?

Well, over the past 10 years I’ve been working on how we can bring different ideas like social movements principles into health and care improvement to build energy for change. When we think of some great social movement leaders like the leaders of the American Civil rights movement, or the women’s suffrage movement, or the gay rights movement or the environmental campaigners who were so successful in the 1970s, we can learn a great deal because these were leaders who had very little power in a formal sense. They weren’t leaders of a hierarchical system. They had very few resources for change in a traditional sense, and yet they were leaders that were able to mobilise people to change the world. When you look at the health and care system, there are so many passionate people who want to make change happen.

What approaches do you use to connect with the energy that’s out there, and help make the kinds of changes that are needed for the future?

One approach is to mobilise vast numbers of people through a call to action. We’ve had some really great results using this approach. For instance, one of the programmes I worked on was about people with dementia who were being inappropriately prescribed anti-psychotic drugs. Instead of setting it up as a classic change programme, where we write a guideline for prescribing clinicians and say ‘you’ve got to prescribe these drugs differently for people’, instead we created a call to action. We engaged lots of different groups of people who have a contribution to make to the change process. We engaged people living with dementia and their families and the voluntary organisations that advocate for them. We mobilised people who manage care homes, senior leaders in healthcare organisations, pharmacists.

Each of these groups played their part in changing the system. I think that that call to action made a big difference in helping us across England to get a 51% reduction in the prescribing of anti-psychotic drugs for people with dementia.

You also recently pioneered NHS Change Day. What’s one top tip you would share with clinical leaders from this experience?

This was an amazing initiative which I feel proud to have been involved in. In 2014 we received 800,000 change pledges. They were small things that will make a difference to our patients, but when you add them all up they end up being really big changes that are impacting on a lot of people. What I’d say to clinical leaders is: don’t try to create big change all at once. Big change happens as a result of lots of small actions.

How would you go about leading a change process for the management of patients with age-related hearing loss?

If I were leading this kind of change programme, rather than rushing out and taking action and coming up with a change plan, the first thing I would do before we start is to really listen to the people involved in the change, not just the people who are going to be responsible for implementing the change, but the beneficiaries of the change as well. I’d work with them to build a sense of shared purpose. I’d also frame the story around a particular patient. Tell their current story and how we really want it to be.

Say we wanted to move the screening element of an elderly patient’s care from a hospital setting into a community setting. What will it really take to achieve the goal? Because moving a service to a community setting is not a goal that is going to unite everyone on a shared purpose. Providing higher quality, person-centred care for patients with age-related hearing loss, is the goal. Moving it into a different setting might be a part of that. I would find new methods and approaches that will galvanise people to take action to achieve the outcomes they really care about. This is not about setting up workstreams, a programme plan and ways to hold people to account. It’s about making sure we really get buy-in. I’d really think beforehand about how to work with people, because they will own what they co-produce.

Of course, we also have to measure whether these small actions actually lead to an overall improvement, so I would also co-create a baseline measure and keep measuring it over again. This is crucial for helping to sustain the change in the longer term.

Thank you for your time and insights, Helen!

Thank you for the opportunity!

A summary of Helen Bevan’s top tips for clinical leaders: