The Grand Départ of the Tour de France may have attracted the bulk of the world’s press (and a fair quantity of hefty thighs) to the Palais des Arts in central Brussels for the first week of July, but the real cultural highlight had just drawn to a close. The 5th CEORL-HNS had already staked its claim as the biggest European ENT conference, attracting 3000 delegates from 97 countries with a faculty of 639 and boasting 272 representatives of industry under the banner of ‘Driving the future of ENT together’. Maybe your correspondent is feeling the ravages of time, but the delegates seemed by far the youngest, most diverse and energised bunch of any attendees in living memory. Certainly a far cry from the customary pinstripe and rhinophyma brigade of congresses past and my current bunch of shiftless slack-jawed trainees (no offence intended). 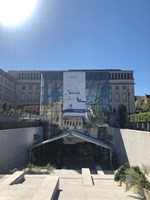 There was a definite sense of emphasis passing to the new generation, with the fresh faces of Young IFOS maintaining a high profile and a programme of ‘Basic ENT’ specifically aimed at the junior professional rather than the grizzled patriarch. Over 500 tweets and Instagram posts were generated under the conference hashtags, many praising the excellent organisation, speakers’ programme and the scorching weather. Tributes must be paid to President of the congress, Professor Marc Remacle, Scientific Chair, Elisabeth Sjögren, and confederation President Professor, Hans Eckel, for overseeing an event which genuinely fostered full collaboration between the bewildering panoply of European ENT Societies.

The conference app was suitably intuitive to help negotiate the somewhat daunting scientific programme. The customary instructional courses, keynote speeches and round table debates were augmented by tandem sessions featuring two subspecialties and good-natured ‘battles’ between proponents of alternative viewpoints.

There was plenty of cutting-edge innovation, with sessions on Biologics, 3D printing, augmented reality and good old robotics. If you were after controversy then the perennial debates were revisited on the T3 larynx, extent of ESS and tonsillotomy vs. tonsillectomy. The unmissable highlights included Professor Valerie Lund’s tribute to Heinz Stammberger and Hesham Negm’s talk on the latest imaging of the mummies of the pharoahs. Over 1300 abstracts were submitted, with e-poster and free paper sessions being particularly well-attended. 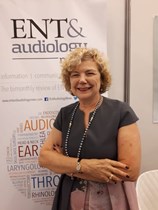 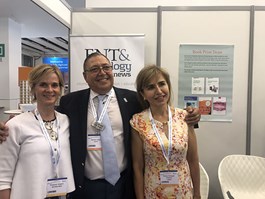 Amidst the sweltering high summer heat, the Brussels Comic Book Museum played host to the networking evening against a slightly disorienting background of Smurfs and Tin-Tin characters. The intoxicating mix of beer, frites, moules and chocolate had a dramatic effect on certain delegates’ constitutions and reminded us of the great contributions of the Low Countries to European culture. 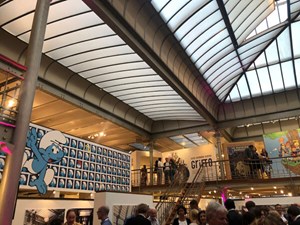 My personal highlight of the Belgian sojourn was witnessing the gradual opening of Van Eyck’s Ghent altarpiece in the joyous St Bavo cathedral, my reverie only enhanced by the glass of 11% beer enjoyed a few moments earlier. What a glorious country, and what a glorious congress - the American academy finally has a serious rival on the global scale. Milan in 2021 has a hard act to follow.

The 5th Congress of European ORL-Head & Neck Surgery (CEORL-HNS) was a successful meeting of the European ORL community, hosting eminent international faculties of our discipline and enriched by an extensive participation of delegates from around the world. Moreover, a very active role was played by young physicians in several sessions, as well as a few tracks entirely conceived for them. This followed a long-course effort of harmonisation made by representatives of continental ORL societies, which united the Confederation of European ORL-HNS.

This harmonisation led to a rich scientific programme where each subspecialty had its own well-defined track, held by the leading voices of the European scientific community. Similarly, delegates may have noticed that the overlaps of analogous topics were small and locations for similar tracks were nearby in order to reduce displacement between each session.

CEORL-HNS 2019 has been a cornerstone for the involvement of young professionals in the scientific programme. The group of young ORL of IFOS (YO-IFOS) had an active role in contributing as invited speakers at round tables, as well as chairs and moderators of several keynote lectures and instructional courses. Moreover, YO-IFOS members held three round tables, hosting faculties of exclusively young physicians. 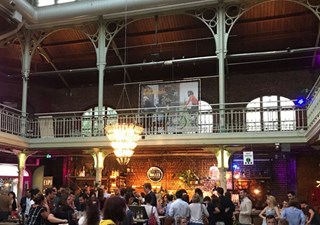 The YO-IFOS event for young physicians was held at the ancient agora of Brussels city-centre, Les Halles de St Gery.

A basic ENT track was introduced for the first time, usefully illustrating how to deal with everyday issues of clinical practice. Not surprisingly, the basic track was popular amongst delegates, and will likely be introduced in future congresses.

Among other novelties of the scientific programme, participants were asked to be actively involved during lectures, thanks to a digital voting system. In addition, some of the sessions were set up as an open quiz for the audience.

The city of Brussels was a perfect host for the social activities of the congress, by virtue also of the central location of the venue. Among the social events, the cocktail event organised by YO-IFOS for young physicians, in collaboration with young members of the European Rhinology Society, saw the participation of more than 150 peers from all over the world and it was enriched by the presence of Professor Brian Westerberg, President of IFOS, and Professor Cem Meco, the newly appointed President of CEORL-HNS. Both confirmed their intention to enhance the active participation of young professionals in the upcoming congresses of IFOS in Vancouver and CEORL-HNS in Milan in, both in 2021. Taking in account the success obtained by CEORL-HNS 2019, IFOS 2021 and CEORL-HNS 2021 are appearing as the future unmissable events for the ORL scientific community.

The Confederation: Creating one voice for ORL-HNS in Europe and beyond.

All successful abstracts have now been sorted into free papers and posters and have been allocated to their respective sessions.

The committees of the congress have been working flat out to present a genuinely state-of-the-art scientific programme.  You can find a useful online planner here, where you can search by day, sub-specialty, and speaker.

Inspired by the new organisational aims, we were also eager to introduce new session formats. This has resulted in the ‘basic ENT track’ as well as the ‘tandem’, ‘debate’ and ‘nightmare’ sessions.

The city of Brussels is as beautiful as it is historic, and you are warmly invited to the events in our Networking Program.  The highlight will be the congress evening on Monday 1 July.

The brand-new ‘Basic ENT’ track was specifically designed with the needs of trainees and young professionals in mind. Basic ENT covers a broad range of clinical topics in a practical and interactive manner, in addition to all the practical skills you will need to kick-start your research career.

All in one place – the Confederation App is your primary and most up-to-date source of information regarding CEORL-HNS 2019. Not only does it cover all the information contained in the final program book, but it also features various tools that will increase your enjoyment of the conference. Open this link on your mobile device or search the Apple App Store or Google Play store for CEORL-HNS 2019: http://www.conference-compass.com/app/ceorl-hns-2019/alldevices/