Cognitive behavioural therapy (CBT), a psychotherapeutic treatment method, is most commonly used to treat anxiety and depression. Newly published results from a controlled, clinical study demonstrate that an adapted CBT programme is useful for several common challenges in aural rehabilitation; hearing aid fears, failing ability to alternate satisfactorily between activity and rest, misplacement of attention focus and uneconomical use of memory capacities in listening.

By applying the CBT model to the case of stressed hearing-impaired persons we can identify vicious cycles where avoidance causes the very problem that is avoided.

“Cognitive therapy offers a stepwise guide on how to break vicious cycles caused by excessive avoidance.”

A hearing impaired nurse might not use her hearing aids because she worries that she will lose her job when her employer realises that her hearing is too bad for her to receive important messages. Her employer will as a consequence not be in a position to make necessary adaptations and she risks actually committing maltreatment because of the resulting misinterpretations caused by her avoidance.

Correcting exaggerated appraisals of threat and personal vulnerability is a fundamental approach in CBT and is achieved by interventions such as guided discovery, psychoeducation and cognitive restructuring. The aim is to break vicious cycles such as in the case with the hospital nurse. It should however be noted that the manual does not specifically address problems related to hearing aids. The CBT intervention can be useful for a range of problems, as long as you have made managed to set up a case formulation relevant for the unique help-seeking individual. See Figure 1 for an illustration of how this can be done. 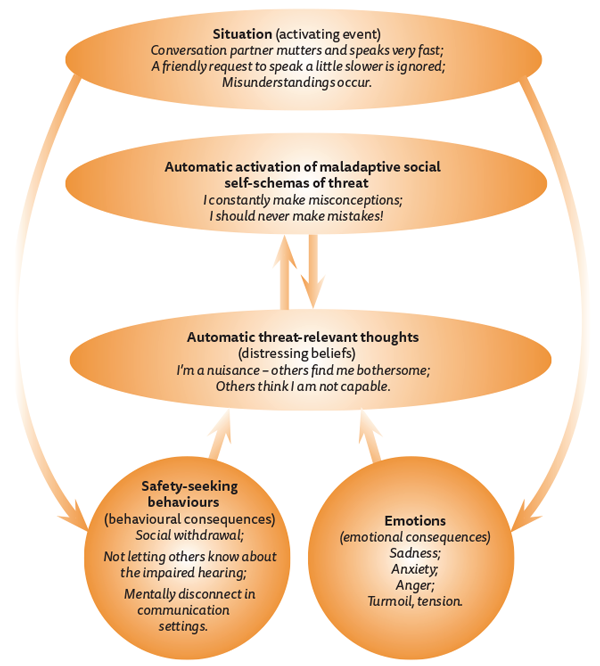 There is another avoidant coping strategy that causes many problems, but that few are consciously aware of. Turning eyes down or making oneself fade into the background is a natural response to fear of negative evaluation by others or to fear of being exposed as incompetent. This strategy is often used when one realises that one has not heard what has been said.

The strategy has an instant stress-reducing effect, but it has unfortunate adverse long-term consequences. This type of avoidance can cause detrimental reduced access to information, far beyond what is already caused by the impaired loss itself. Being able to shift from self-focus to a controlled focus outwards will significantly increase the attention span. To some, letting go of this strategy will however be extremely stressful and these individuals will benefit from therapist-supported training. The CBT programme contains suggested exercises, but the stated purpose can be achieved in many ways. One of my previous participants enjoyed going on rides on his motorbike and he found this to be an excellent situation for him to practise on volitionally controlled attentional shifts. He directed his attention to the wind in his face, then to the sound the engine made, then to the smell in the air. His experience was similar to what others have reported; that it is easier to direct attention towards something, than struggling with trying to distract oneself away from something intimidating. Once having made this discovery, patients’ motivation to do these exercises tends to increase instantly. 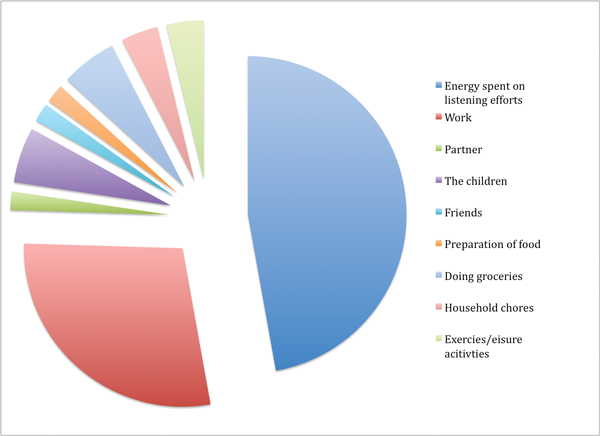 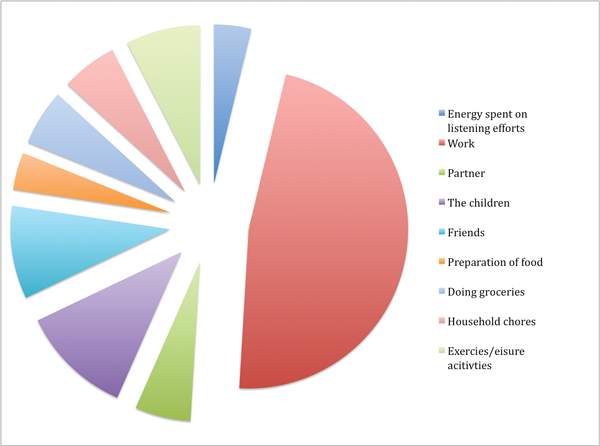 Many of our participants reported that they would be very anxious before important meetings and as a result, not able to focus appropriately. We found attention training useful here. By becoming able to volitionally control attention, our participants’ ability to take part in meetings and social interactions increased. It also gave them access to information that had previously not been available to them. From being totally convinced that others viewed them as slow, uninteresting or incompetent, they come to realise that most people are more consumed with themselves than with paying attention to the communicative mishaps of others. In addition, increased control made it easier to accept that full comprehension may not always be achievable.

Recent investigations have identified several factors that can cause exhaustion among hearing-impaired individuals, such as the extra load on working memory, extra effort in continuously directing attention to the relevant sound source, slowed acclimatisation to noise, extra demand on compensation efforts in top-down processing when making utterances meaningful, extra demand in bottom-up processing when differentiating between uttered sounds on a phonemic level and challenges related to adjusting hearing with different levels of hearing loss in both ears (asymmetrical hearing).

In the CBT programme we found it useful for the individual participants to analyse which of these compensation processes they excelled in and which they were less successful with. In some cases better hearing can be achieved by training and in some cases the cost of effort is just too high. These are important issues to consider as hearing impairment will cause exhaustion, especially when vocationally active. As hearing is a critical prerequisite for normal human interaction, most individuals with hearing impairment use cognitively demanding compensation efforts that may lead to fatigue and exhaustion.

Address the need for recovery

We observed that many of our participants suffered from demoralisation and exhaustion because they continuously forced themselves to endure ungratifying and even humiliating social interactions. In these cases we treated the resistance against social withdrawal as avoidance. Figures 2 and 3 illustrate how hearing impaired individuals estimate how energy is distributed in daily life with and without hearing impairment.

The illustrations give a clear portrayal of the importance of adaptively addressing the need for recovery when hearing is impaired. Cognitive therapy offers a stepwise guide on how to break vicious cycles caused by excessive avoidance. What constitutes “avoidance” must however be conceptualised individually with appreciation of both individual and contextual factors. For one individual the tendency to socially withdraw constitutes a problem-maintaining avoidance, while another individual needs to learn how to withdraw when in need of rest.

Katharine Cecilia Williams has worked as a clinical psychologist at the National Centre for Hearing Impairment and Mental Health since 2001, and recently completed a research project, titled ‘A Randomized, Controlled Study of a Cognitive Therapy Program for Distress in Hearing Impaired Employees’. The project aim was to identify and test efficient coping strategies. The manual was originally adapted to address mental distress but here the utility of the CBT programme in rehabilitation is presented. The manual is planned for publication in 2016. Those interested can subscribe for updates on the blog.

The CBT programme has been tested with promising results. We have demonstrated that the suggested programme is useful in reducing mental distress. Following the stepwise procedure, the programme can be tailored to address often-occurring challenges in aural rehabilitation, for example: 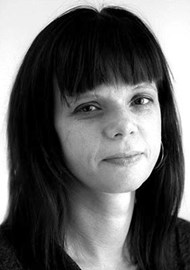