Deafness in dogs and its importance

Deafness is a significant problem in certain breeds of dog, with as many as 30% of Dalmatians and 11% of bull terriers reported as having congenital deafness [1]. Over 80 other canine breeds have also been identified with inherited deafness. In many of these breeds the deafness is associated with genes conferring white skin pigmentation but the genetics is complex and genetic testing is not yet available.

In addition to these inherited forms, acquired forms of hearing loss also occur in dogs due to ageing, exposure to ototoxic substances or loud noise and otitis interna. These acquired forms have been less extensively studied and their prevalence in the wider dog population is unknown. 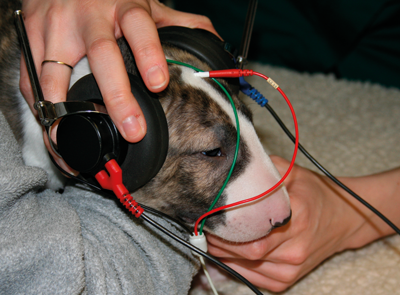 Deafness can be an important welfare issue in affected dogs. Animals with complete bilateral deafness are thought to be at higher risk of injury or death due to their inability to anticipate approaching dangers, such as cars. Deaf puppies are easily startled and this can cause them to develop anxious or aggressive personalities. They are also more difficult to train by conventional methods than their hearing counterparts. For these reasons, they are more likely to be rehomed and some people have gone as far as suggesting that puppies diagnosed with bilateral congenital deafness should be euthanased following diagnosis. Animals with partial or acquired causes of deafness cope better, although they may still have difficulties localising sounds and their relationship with their owners may be altered as their hearing deteriorates.

“The specificity of OAE tests for cochlear function/dysfunction and their ability to quickly provide information about frequency-specific deficits means that their use may yet expand into the clinical veterinary field.”

Diagnosing deafness in dogs is therefore important and although hearing aids are not available, knowing an animal’s hearing status improves understanding of an individual’s behaviour, allows modifications to be made in the way they are trained and reduces the risk of road traffic accidents by walking them on a lead. More importantly, knowing the hearing status of puppies of breeds at risk of inherited forms of deafness prior to breeding can enable removal of deaf animals from the breeding pool thereby reducing the prevalence of this condition in the future.

Hearing testing in dogs in the clinic

The majority of hearing testing in animals is screening for congenital deafness in puppies. This is organised voluntarily by breeders with litters of puppies usually being screened at 5-8 weeks old before they are homed. Individual animals may also be presented for diagnostic hearing testing due to suspected deafness, behavioural problems or more widespread neurological disease; however, many such animals do not undergo further hearing evaluation. There are only about half a dozen centres (mainly large veterinary hospitals) offering veterinary hearing testing in the UK. To my knowledge all centres are currently using ABR testing for hearing screening and testing. This is performed conscious in sleepy puppies but requires sedation in most adult dogs.

OAE testing in dogs – our findings and experiences

Although OAE testing is not routinely used for hearing testing in veterinary patients, there are a number of research publications on its use. We were the first group to study OAE tests in deaf puppies [2]. Our motivations included the apparent ease and speed of screening using OAEs in humans, the lower cost of the equipment compared to ABR machines, the ability to specifically test cochlear function and the non-invasive nature of the tests. A major disadvantage of ABR testing in animals is the requirement to place subcutaneous needle electrodes as their hair coats prevent good contact using adhesive pads. Whilst these needles are usually well tolerated, they can upset owners, risk the development of infection and make it more difficult to justify the test for experimental purposes. 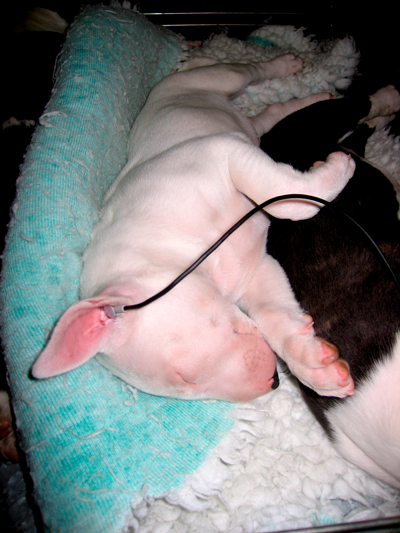 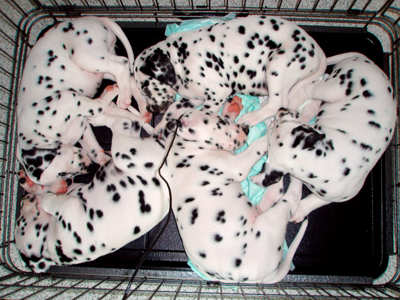 Sleeping Dalmation puppies with one pup with OAE probe in ear.

In a group of unsedated puppies presented for screening for congenital sensorineural deafness, we were able to correctly identify all seven deaf ears and 53/68 hearing ears using a TEOAE screening system [2]. The failure of 15/68 hearing ears to achieve a pass would mean that these ears would need to be retested either with OAE tests or ABR testing. Another group has subsequently used DPOAE testing in a group of 34 puppies and were able to correctly identify all deaf ears. Their equipment categorised two additional ears as “refer” in which ABR waveforms were present (excluding congenital inherited deafness) but both had unusual ABR waveforms [3].

We have also investigated evoked OAE tests in 28 adult dogs that were presented for ABR testing under sedation (unpublished). The TEOAE test correctly identified 37/42 hearing ears, failed 3/6 hearing impaired ears and 7/8 deaf ears but to our concern one ear categorised as deaf, with no ABR waveform at 80 or 100dB, passed the TEOAE test. The DPOAE test correctly identified 23/27 hearing ears and failed 4/4 hearing impaired ears and all eight deaf ears tested.

We have subsequently used OAE testing to show that MRI noise has an immediate adverse effect on cochlear function in dogs [4] and that this effect can be negated using ear protection ear plugs (unpublished). Another group have used DPOAEs to show significant decreases in response amplitudes at 6-12 kHz in geriatric compared to control dogs [5].

Although both TEOAE and DPOAE tests show promise in dogs, I believe that DPOAE testing is more likely to be used in the future. Further investigation to refine and optimise test protocols is needed before these are routinely used as clinical tests of auditory function in this species. A major challenge when OAE testing dogs is correct probe placement. Dogs (and many other animals) have an L-shaped ear canal and in order to achieve a good fit, the probe needs to be placed deep into the ear in the horizontal part of the ear canal. This makes it difficult to ensure the probe is in a suitable position with a good seal and some conscious animals resent placement deep in the canal and it results in head shaking until the probe is dislodged. Despite these challenges, the specificity of OAE tests for cochlear function/dysfunction and their ability to quickly provide information about frequency-specific deficits means that their use may yet expand into the clinical veterinary field. 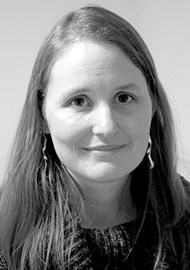