Cartilage conduction hearing aids: the third pathway for sound transmission and its application
By Hiroshi Hosoi

The new sound pathway ‘cartilage conduction’ can provide various types of new sound products to the world. The first product using this pathway is a hearing aid which can help patients who cannot use regular hearing aids. 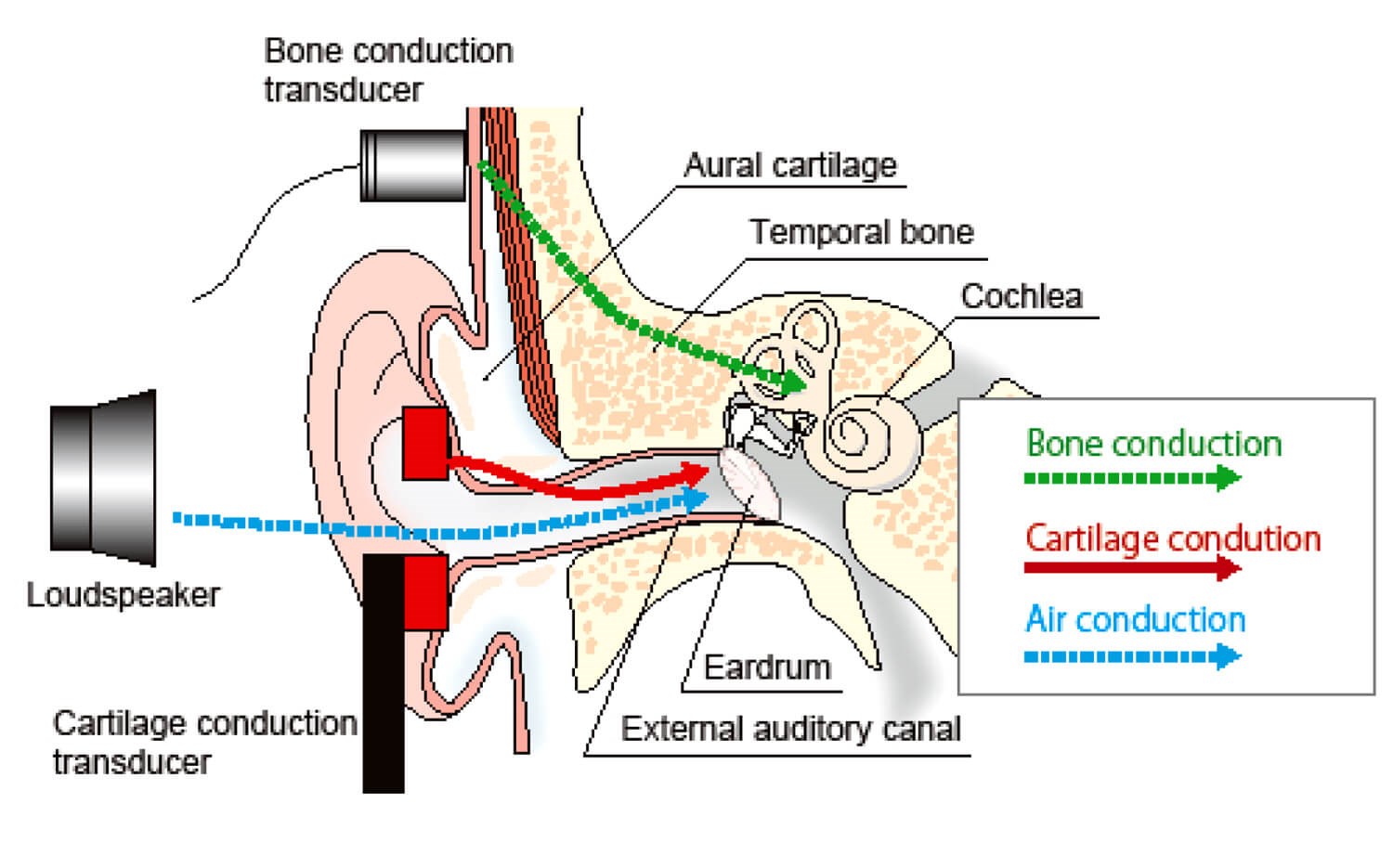 What is cartilage conduction?

It has been long considered that air conduction (AC) and bone conduction (BC) are the two major mediators that conduct sounds to the inner ear. In 2004, Hosoi found that vibration of aural cartilage, generated by gently placing a transducer on it, could create audible sound with the same level of clarity as AC and BC sound. He thus proposed the term ‘cartilage conduction (CC)’ for this concept (see Figure 1). The most significant difference between BC and CC in normal external auditory canals is essential or unnecessary in vibration of cranial bone. Hosoi also proposed the development of novel communication devices, such as hearing aids, telephones, etc. using his findings [1]. 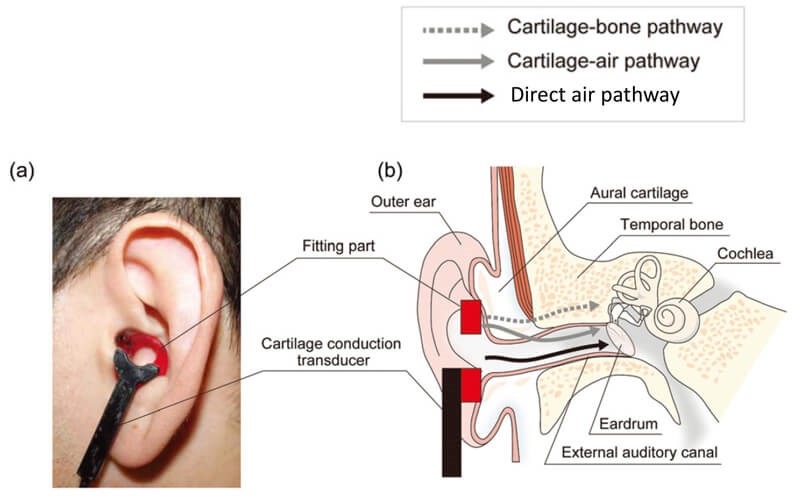 Three plus one pathways can be assumed in CC

Nara Medical University and Rion Co., Ltd have developed a CC hearing aid for patients who cannot use conventional AC hearing aids (due, for example, to atresia of the external auditory canal or severe otorrhea). Although such patients are usually encouraged to use a BC hearing aid, BC hearing aids require strong pressure against the cranial bone, hence many patients suffer from pain and annoyance. In addition, the sustained pressure on the skull causes several disorders at the contact point on the skin, including a cave-in and erosion. Furthermore, the transmission efficacy of acoustic information is low, therefore considerably large energy is needed to transmit vibrations to the heavy skull bone. In contrast, CC does not require strong and sustained pressure on the user’s tissues, because cartilage is much lighter than skull bone so less vibrational power is needed, and also CC hearing aids can give a stereo-sound by binaural hearing aid fitting. Thus, CC hearing aids would provide great benefit to patients with outer ear disorders.

“CC does not require strong and sustained pressure on the user’s tissues, because cartilage is much lighter than skull bone so less vibrational power is needed” 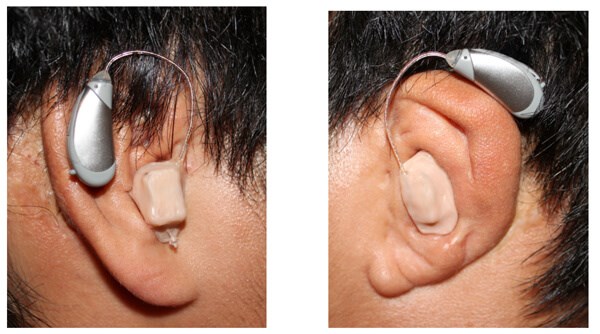 Figure 3 (a). Case 1: 19 years old, male (bilateral bony aural atresia, BAHA user). The view of his ears with CC hearing aids made by RION. CC hearing aids were easily fixed without any equipment.

Figure 3 (b). Audiometric test results. They reveal no clear difference between BAHA and CC hearing aids.

Case 1: 19 years old, male (bilateral bony aural atresia, BAHA user) Patient underwent an operation for BAHA at the age of 17 years old. When spoken from the unaided side, he often feels the difficulty in hearing. Figure 3 shows the view of his ears with CC hearing aids and audiometric test results which reveal no clear difference between BAHA and CC hearing aids. CC hearing aid is more advantageous than BAHA in this case, because an operation is unnecessary and sound is provided in stereo. 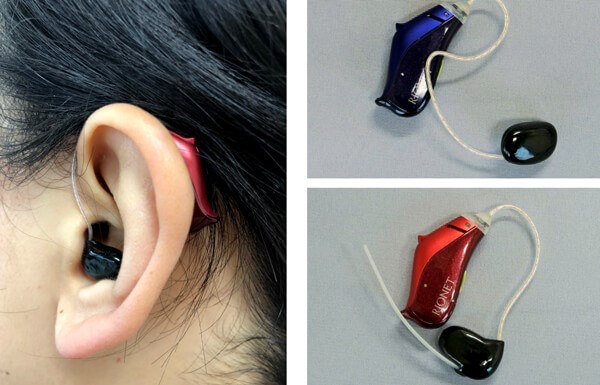 Figure 4: The prototype of CC hearing aids for the patients with sensorineural hearing impairment made by RION.

CC hearing aids for the patients with sensorineural hearing impairment

“Overall, 39 out of 41 subjects continued use of the CC hearing aids”

Other audio and communication equipment – application of CC

Various types of new audio equipment can be realised using CC. These are mainly for people with normal hearing; however these are also helpful for the hearing-impaired. 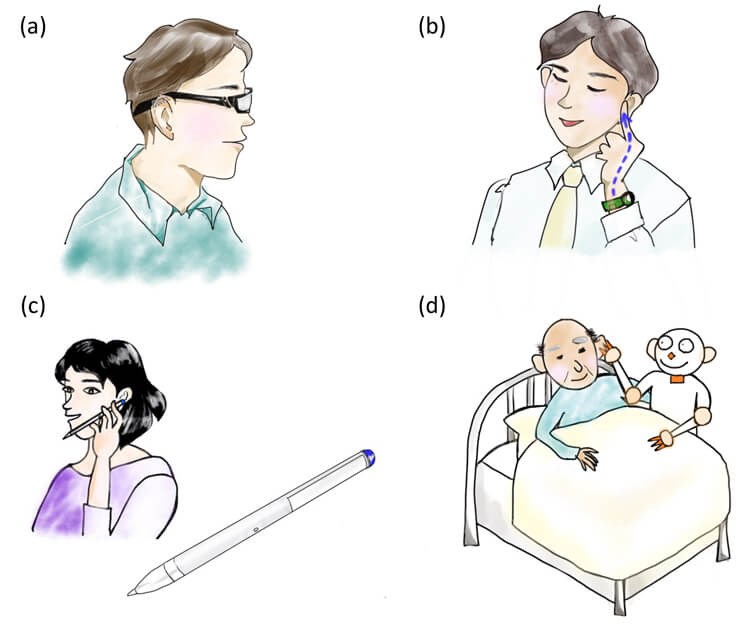 CC could bring very slim mobile phones into reality as shown in Figure 5(c). This type would be very convenient when used with a tablet PC. 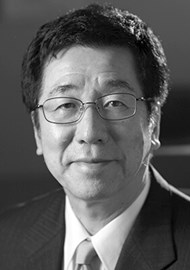