Conspiring together: tinnitus and hearing loss
By Nic Wray and Zheng Yen NG

In this special feature, Nic Wray of the British Tinnitus Association and Zheng Yen Ng of The Ear Foundation present the results of their report into managing tinnitus for people with hearing loss.

In September 2015, the British Tinnitus Association (BTA) and the Ear Foundation launched a report titled ‘Conspiring together: tinnitus and hearing loss’. The report was commissioned following the James Lind Alliance Tinnitus Priority Setting Partnership, where one of the top ten questions identified was “How can tinnitus be effectively managed in people who are deaf or who have a profound hearing loss.”

That this question was seen as a priority by the tinnitus community echoed our anecdotal evidence. Many people with severe to profound hearing loss tell us that they are struggling and are dissatisfied with the support they are offered, having little idea of how to manage their tinnitus.

When considering how to go about answering this question, we were struck by the lack of resources for tinnitus patients with severe to profound hearing loss. It became clear that before we could address the question from the Tinnitus Priority Setting Partnership, we would need to more formally document the experiences of those living with hearing loss and tinnitus.

Living with hearing loss and tinnitus

Working with The Ear Foundation, we devised a study to explore the views and experiences of adults with hearing loss who experience tinnitus via an online questionnaire and interviews. The questionnaire was disseminated through the databases and social media of the British Tinnitus Association (BTA), The Ear Foundation Research Forum, deafPLUS and The Tinnitus Clinic Ltd (London). We had responses from 1432 adults. Of these, 1002 reported having a mild / moderate hearing loss and 286 a severe / profound hearing loss and it is the responses from those with hearing loss we will explore in this article.

For the majority (72%) of respondents, tinnitus was experienced all of the time. For 27% of the mild / moderate hearing loss group, it was a severe problem, whilst for the severe / profound hearing loss group this increased to 44% (Table 1).

Responses from many of the participants described tinnitus as having a significant impact on their physical and emotional well-being, as well as their relationships with others. This was common across both groups – respondents talked about feelings of isolation, despair and 20 mentioned thoughts of suicide.

The respondents felt isolated not only in social or work situations, where hearing loss and tinnitus posed communication difficulties, but also within the home and family environments. Many found that balancing hearing loss and tinnitus was challenging, especially at times when tinnitus could be louder than speech or the television. One respondent commented: “I feel I’m living in a world of my own. My family think I’m ignoring them … I have to admit to feeling suicidal on many occasions just to get away from the noise…”

Of the respondents with a mild / moderate hearing loss, 87% had sought help specifically for tinnitus compared to 76% of the severe / profound hearing loss group. However, when asked about the current management of their tinnitus, analysis revealed that the severe / profound group were much more likely to be continuing to ask for help or that their tinnitus was not being managed (70%) than the mild / moderate hearing loss group (56%). Many comments echoed the thoughts of one respondent who said: “I don’t feel it is being managed … I feel it has a life of its own which I can’t control.”

The majority of those seeking help first looked for it from their GP, ENT specialist or NHS audiologist. The severe / profound hearing loss group were more likely to look to an NHS audiologist as a first source of help, often in a routine audiology appointment.

However, 24% of the mild / moderate hearing loss group and 44% of the severe / profound group told us that nothing was provided for their tinnitus or that they were discharged from the audiology clinic.

What patients think of the services offered

One of the points frequently made was that the professionals in the audiology clinic focused on the hearing loss rather than the tinnitus: “It’s more about giving me hearing aids than treating tinnitus.” However, audiologists (both private and NHS) and charity or voluntary organisations such as the BTA were the only sources of support that the majority of respondents rated as “helpful” which may indicate that when tinnitus is considered and managed along with hearing loss, the intervention will be beneficial and patient satisfaction will be correspondingly higher (Table 2). 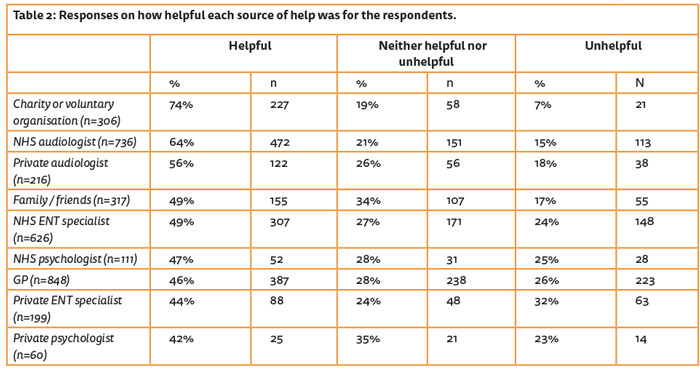 “The first consultation is so important … mine was hopeless showing no understanding of what had happened to me … it set me back months! … I transferred to another hospital with advice from my GP and it was a revelation!”

Where clinicians have shown empathy and communicated well, this was also valued, even if nothing could actually be done. Conversely, where little interest or understanding was shown, this added to the burden of having both tinnitus and hearing loss.

Many felt that there needed to be increased awareness that having both hearing loss and tinnitus can obstruct diagnosis.

What can health professionals do?

The report makes a number of recommendations which set a serious challenge to the tinnitus community. In order to improve the quality of life for people with hearing loss and tinnitus we urge hearing professionals, in all disciplines, to:

The full report ‘Conspiring together: tinnitus and hearing loss’ can be downloaded free of charge from www.tinnitus.org.uk/tef

Nic Wray is the Communications Manager for the British Tinnitus Association (BTA). The BTA strives to be the primary source of support and information for people with tinnitus and their carers in the UK and to advocate on their behalf. Nic’s role covers the production of information in written and online formats, social media, press and PR. Prior to joining the BTA in 2010, Nic had a varied career in the third and private sectors, including a spell with a community circus.

Zheng is currently the Research Coordinator at The Ear Foundation. He graduated in Applied Linguistics/TEFL and Neurolinguistics from the University of Groningen in the Netherlands, rounding off one of his theses on literacy skills in CI children in collaboration with The Ear Foundation. His interests lie in the field of hearing loss, not only with regard to the language and communication of those who have a hearing loss, their families and professionals, but also the views and experiences these groups have with regard to their hearing loss (and related fields), its management and services. 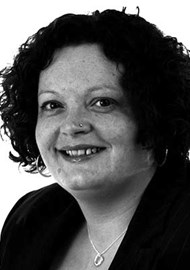 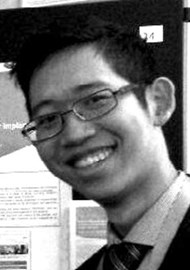