The acutely dizzy patient can be a diagnostic and management dilemma for emergency departments and general practitioners, with many patients consequently having delayed access to specialised assessment and treatment. David Jay tells us about HINTS, a bedside test that can differentiate central from peripheral dizziness with greater accuracy than MR imaging.

According to literature primarily from the USA, it is estimated that 33% of emergency department visits for dizziness or vertigo are due to inner ear conditions while only 3-5% are due to strokes in the posterior fossa [1]. Treating every case of acute dizziness as stroke puts needless pressure on hospital beds and neuroimaging services. Conversely, misdiagnosis rates for posterior circulation strokes are estimated at 35% [2].

The majority of these ischaemic strokes will be hidden to CT scanning, and approximately 20% may even be missed by MRI scanning in the first 48 hours [3]. By assuming a benign vestibular cause for such symptoms, we can risk significant morbidity and mortality. Unfortunately, many ischaemic strokes in the posterior fossa can lack focal neurological signs and it can be very difficult to distinguish one from a benign condition such as vestibular neuritis. This poses a particular challenge to clinicians on the frontline, many of whom are not familiar with vestibular assessment techniques used widely in the outpatients setting by ENT and audiology.

In the UK, there are no standardised protocols or approaches for triaging and diagnosing acute dizziness, there is often no agreement on whether such patients should be seen by stroke physicians, a medical registrar or ENT, and dizzy patients in the emergency department encounter a wide range of experiences. In many simple cases of vestibular neuritis and BPPV, there is often no clear diagnosis at the acute stage as there is no vestibular expertise available in the emergency department or on call. Referrals might not be made into audiology or ENT for further investigations and treatment.

ENT and audiology often meet these patients in the outpatients setting many months later, when symptoms may have had a significant impact. For some patients prone to anxiety, the symptoms have become chronic, developing into persistent postural perceptual dizziness (PPPD). For the elderly, chronic dizziness can mean reduced independence and a significant increase in falls risk. Improving diagnosis, education and access to ENT and audiology expertise in the initial stages can only improve outcomes for such patients.

In order to improve diagnosis of acutely dizzy patients in the emergency department, an oto-neurology team at Johns Hopkins led by Professor David Newman-Toker have developed a bedside eye exam known as HINTS (Head Impulse, Nystagmus, Test of Skew). Numerous papers from multiple research teams have now shown that HINTS can differentiate stroke from peripheral vestibular dysfunction with greater sensitivity than MRI in the initial 48 hours, and with reduced associated costs and rates of false diagnosis [4,5].

For an elective rotation on the UK Scientist Training Programme (STP), I spent a month in Baltimore with Dr Newman-Toker’s team, observing the use of the HINTS protocol in an emergency setting and the development of their acute dizzy on-call service to the emergency department. A summary of the relevant literature, my observations and the applicability of this diagnostic approach to the NHS was published as a report by the funding body that allowed me to travel; the Winston Churchill Memorial Trust. It is available online at www.wcmt.org.uk/users/davidjay2017 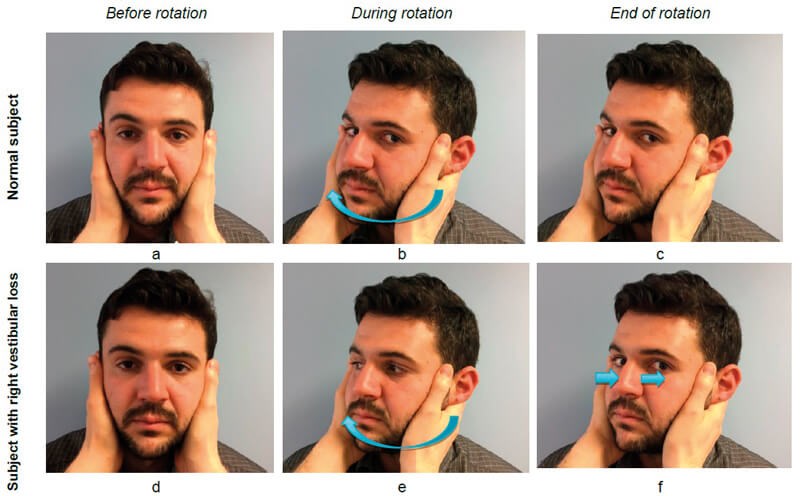 Figure 1. The clinical head impulse test (cHIT). The pictures show a right head impulse on a normal
subject (a-c) and on a subject with right-sided vestibular dysfunction (d-f).

Figure 2. Right-beating nystagmus, from the point of view of the clinician. 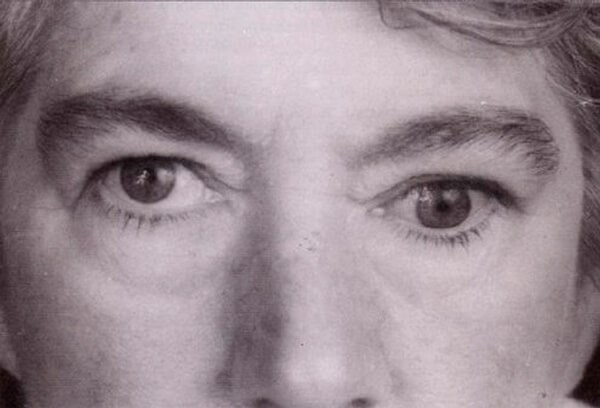 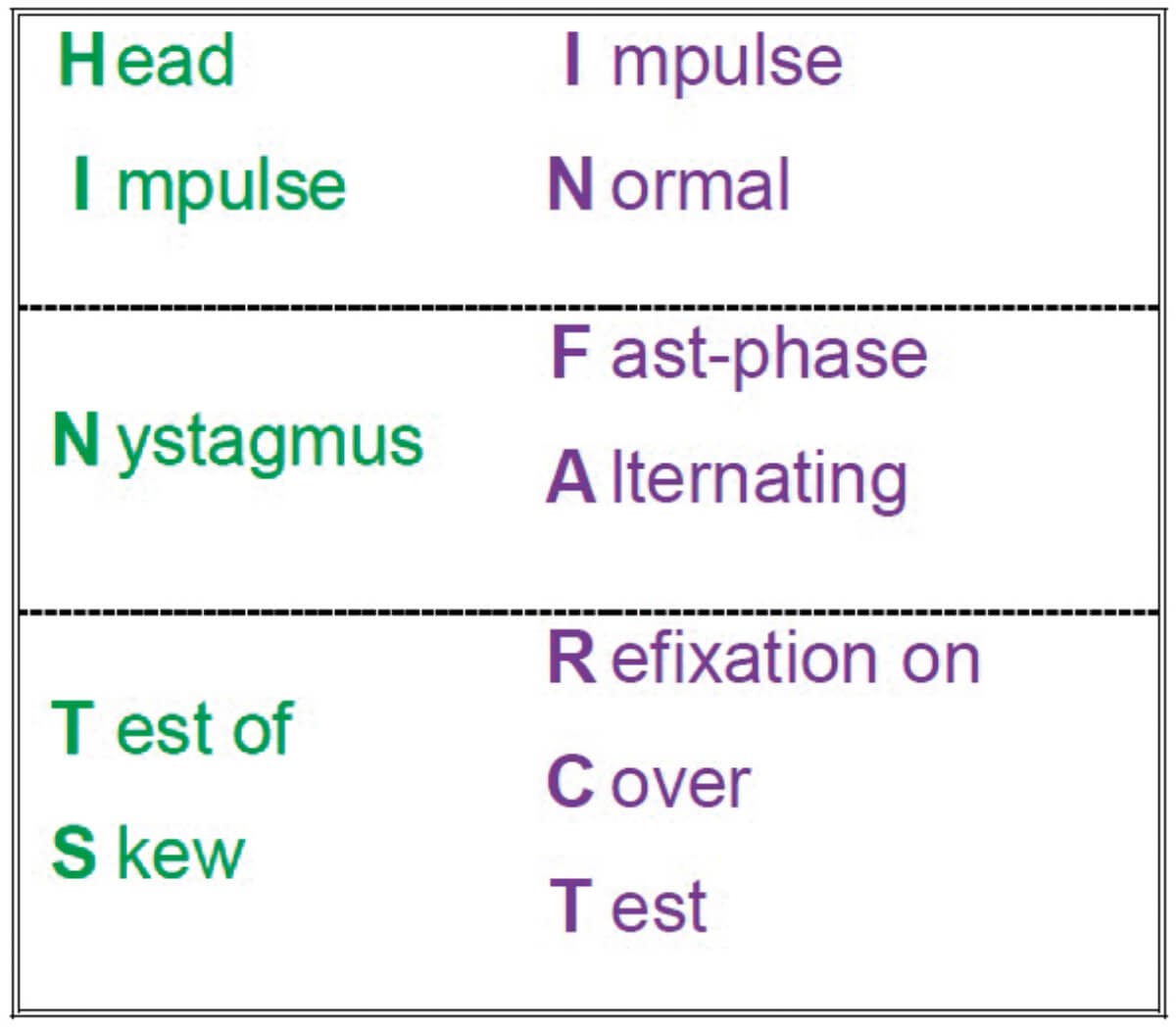 The HINTS protocol consists of three bedside ocular motor tests: head impulse (Figure 1), observation of nystagmus (Figure  2) and test of skew (Figure 3). HINTS is positive for stroke if either the head impulse is normal, the nystagmus changes direction with gaze, or if the eyes are vertically misaligned - a skew deviation (Figure 4). However, what is often missed from a reading of the HINTS literature is that all three elements of HINTS must be assessed in order for it to retain its sensitivity for finding strokes.

A head impulse has to be performed, a cover-uncover test must look for skew deviation, and there must be a spontaneous nystagmus which can either be classified as direction changing (likely central) or direction fixed (likely peripheral). The likelihood of seeing nystagmus with the naked eye is reduced with time following the onset of vertigo, as nystagmus becomes increasingly suppressed by visual fixation. This can mean that in many cases HINTS is not applicable, unless fixation can be removed at the bedside using Frenzel goggles or a similar technique.

Head impulse is negative in the majority of posterior circulation strokes because the vestibulo-ocular reflex (VOR) travels solely in the brainstem and cranial nerves. The majority of such strokes occur in the large portion of the cerebellum supplied by the posterior inferior cerebellar artery (PICA), and therefore the VOR is not interrupted. This is why a normal head impulse alone is a red flag for stroke in an acutely dizzy patient.

However, a small number occur in parts of the brainstem and inferior cerebellum, an area supplied by the anterior inferior cerebellar artery (AICA). Adding in an assessment of nystagmus and skew deviation increases the sensitivity for detecting stroke, and combining all three tests with a bedside assessment of hearing has been shown to be 99% sensitive and 97% specific for stroke in patients with acute vertigo [4].

Contemporary video-oculography devices can aid in diagnosis and triaging of acutely dizzy patients as they allow quantification of the VOR (the video head impulse test or vHIT), as well as recording and assessment of spontaneous nystagmus and skew deviation [5]. These systems could help with acute assessment in several ways. They can potentially provide an opportunity to help improve the ocular motor examination skills of emergency and acute on-call medics through systematic training programmes and expert feedback. Taking the concept further into the realm of telemedicine, acutely dizzy patients with an unclear diagnosis could undergo a strict HINTS protocol using video goggles, performed by medics, technicians or nurse practitioners, and then the results sent to an expert in ENT, audiology or neurology. Goggles could be used in ambulances, primary care settings and remote locations where vestibular expertise is many miles away.

It is clear from the published literature and our shared clinical experience that there is room for improvement in the healthcare pathways of acutely dizzy patients. While there are many differences between the US and UK populations, and while no studies of epidemiology in this area have been carried out in Europe, it is likely that the same risk of misdiagnosis exists in the UK as it does in the US. Regardless of the stroke issues, the question of timely management of the peripheral vestibular patient remains. With proper diagnosis at the acute stage, these patients could be accessing vestibular rehabilitation much earlier, thereby reducing the risk of developing chronic dizziness. I do feel that there is a distinct need for the work done at Johns Hopkins to be expanded outside of the United States, and that in future the NHS could hugely benefit from such techniques and approaches. 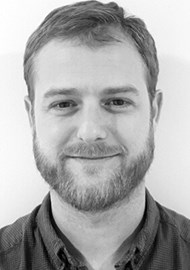