Interactions between auditory and somatosensory pathways can lead to interesting tinnitus experiences which can be very bothersome. Dr Sarah Michiels describes her pioneering work in this area, and the possibilities of physiotherapy based therapy.

Somatic (also called somatosensory) tinnitus (ST) is a subtype of subjective tinnitus, where changed somatosensory information from the cervical spine or jaw area causes or changes a patient’s tinnitus perception.

A physiological explanation for this mechanism was provided by animal as well as human studies, showing brainstem connections between the somatosensory system of the cervical spine and temporomandibular area on the one hand and the cochlear nuclei on the other hand [1,2]. Through these connections, the somatosensory system is able to alter the pitch or loudness of the tinnitus. 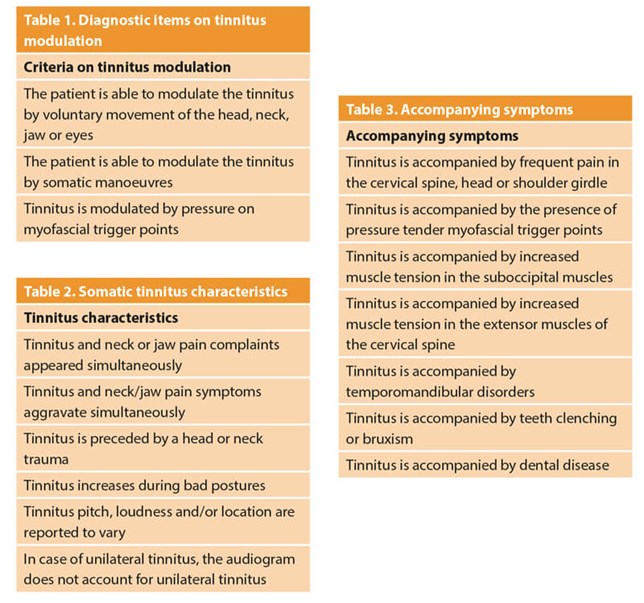 Since 2018, a set of 16 diagnostic criteria exists that, when present, strongly suggest a somatosensory influence on the patient’s tinnitus [3] . The criteria are presented in Tables 1 to 3. To prevent under or over-diagnosis, it is important to keep in mind the authors’ footnotes. When looking at the ‘modulation’ items for instance, the authors recognise the importance of somatic modulation, especially by voluntary movements, for the ST diagnosis, but add that the absence of this ability does not rule out ST. Hence, somatic modulation should not be used as a simple ‘yes/no’ criterion for diagnosing ST. Although the use of somatic manoeuvres to assess tinnitus modulation is included in the list, experts believe that the use of these manoeuvres as a single criterion can potentially lead to over-diagnosis.

“Most studies on temporomandibular treatment use a combination of exercises and occlusal splint treatment. This approach showed a positive effect on tinnitus severity in four studies”

It must also be noted that items, such as ‘tinnitus accompanied by frequent pain in the head, neck or shoulder girdle’ or ‘tinnitus accompanied by temporomandibular disorders’, should be used with a certain prudence if they are the only criterion present. This is because tinnitus and neck or jaw problems can also co-occur without a causal relation. On the other hand, when these items are combined with another criterion, such as ‘tinnitus and neck or jaw pain complaints appeared simultaneously’ or ‘the patient is able to modulate the tinnitus by voluntary movement of the head, neck, jaw or eyes’, the ST diagnosis gets stronger.

Several techniques and approaches have been suggested for the treatment of ST, but generally, ST treatment is either directed to the cervical spine or the temporomandibular area. Cervical spine treatment can comprise many different techniques. A systematic review, published in 2016, showed positive effects of cervical spine manipulations, myofascial trigger point treatment, stabilising and mobilising exercises and transcutaneous electrical nerve stimulation (TENS) [4]. A more recent randomised controlled trial showed positive effects of a multimodal cervical spine treatment on tinnitus severity [5]. This treatment consisted of a patient-tailored combination of manual mobilisations, myofascial trigger point treatment, and stabilising and mobilising exercises.

“The fact that tinnitus can be influenced by somatosensory information from the cervical spine or temporomandibular area in some patients, is currently widely accepted”

Most studies on temporomandibular treatment use a combination of exercises and occlusal splint treatment. This approach showed a positive effect on tinnitus severity in four studies [4,6]. One study mentioned that this effect was only present in patients with severe to very severe tinnitus (Tinnitus Questionnaire score: 47-84) and not in patients with mild to moderate tinnitus (Tinnitus Questionnaire score: 0-46).

Since ST was first mentioned in scientific literature in 1999 [7], a lot has changed in the way researchers and clinicians look at tinnitus complaints. In the past few years, more and more experts are leaving the idea that considering tinnitus as having many different subtypes is the best way to go. Instead, tinnitus is looked at on a more individual level to understand which potential influences are contributing to a patient’s tinnitus. With this in mind, diagnosing a patient with ST, or rather, identifying the degree of somatic influence on a patient’s tinnitus, becomes less complex. If a patient, for instance, has neck complaints combined with his or her tinnitus, but these neck complaints did not appear or aggravate simultaneously with the tinnitus, we can assume that the somatic influence on this patient’s tinnitus will be low. In this case, we should look for more prominent influencers, such as stress or auditory problems, instead of starting a somatic tinnitus treatment as the primary tinnitus treatment.

“A set of 16 diagnostic criteria exists that, when present, strongly suggest a somatosensory influence on the patient’s tinnitus”

If, on the other hand, a patient has developed both neck complaints and tinnitus after a whiplash trauma and he or she mentions that when the neck pain decreases, the tinnitus decreases as well, we can assume that the somatic influence on this patient’s tinnitus will be high. In this case, a somatic tinnitus treatment should be proposed as primary treatment, whether or not complemented with, for instance cognitive behavioural therapy when needed.

The fact that tinnitus can be influenced by somatosensory information from the cervical spine or temporomandibular area in some patients, is currently widely accepted. The existing diagnostic criteria for ST provide a good tool to identify the degree of somatic influence on the tinnitus, but one should keep in mind that patients often present with a combination of influencing factors. Once identified, ST can be treated successfully with cervical spine physiotherapy or with orofacial physiotherapy combined with splint treatment. 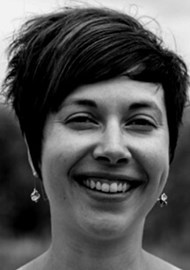