I have been fortunate in my career to travel as an invited lecturer at many hospitals, universities and professional societies around the world. I have spoken to audiology societies, otolaryngology societies, and university communication disorders programmes in Europe, Asia, Africa, Australia, South America and of course, nearly every state and province in the USA, Canada and Mexico.

At last count I have been to 36 nations and spoken with hearing specialists of all ilk and degrees of education. Because of my long association with genetics and genomics and what used to be called ‘syndromology’ or ‘dysmorphology’, I am most often asked to speak about genetics and syndromes. In most of my talks, in order to assess the degree of genetic sophistication of the audience, I give an informal quiz of 10 questions.

The questions are as follows:

When speaking with hearing specialists (as well as speech pathologists), it has been rare to see members of the audience answer more than half of the questions correctly, and most typically answer two or three correctly. For hearing specialists, one of the more important questions in the list above would be number 10. The answer to this question is conservatively 50% [1]. In addition, there are many forms of genetic hearing loss that have a late onset (i.e. after birth). For example, the hearing loss in some genetic syndromes can occur later in childhood or even in adult life, such as found in neurofibromatosis, type II (NF2) where acoustic neuromas may not be present until adult life, or Usher syndrome type III which shows normal hearing and vision at birth with a late onset hearing loss and retinitis pigmentosa in adolescence or early adult life with progressive hearing and visual impairment.

One would think that if half of the cases presenting to audiologists had a genetic basis that clinicians would receive at least some basic education in human genetics and its impact on one’s profession. Unfortunately, this is sadly lacking worldwide.

Genetic hearing loss can be divided into two broad categories: syndromic and non-syndromic. Syndromic hearing loss would be defined as conductive, sensorineural, or mixed hearing loss that occurs as part of multiple anomaly disorder where all of the anomalies have the same primary cause. An example, branchio-oto-renal syndrome (also known as BOR syndrome or Melnick-Fraser syndrome) that has a very high prevalence of hearing loss of all three types. People with BOR syndrome typically have grade I microtia with narrow external ear canals, possible ossicular anomalies including fixation of the stapes footplate, and approximately a quarter of cases have senorineural hearing loss with a hypoplastic cochlea and Mondini malformation. Other anomalies include a high frequency of cleft palate (most often a submucous cleft), preauricular ear pits, and renal anomalies. The gene that causes BOR is known and its inheritance pattern has long been recognised to be inherited in an autosomal dominant pattern meaning that if a parent has the syndrome, there is a 50% probability that any pregnancy established by that individual would result in the birth of a child with BOR, regardless of the gender of the parent or child.

We will revisit this issue of inheritance shortly, but this is critical to understanding the importance of establishing a correct diagnosis, and the role of any health care professional coming into contact with an affected individual.

Nonsyndromic genetic hearing loss constitutes approximately 70% of people born with inherited hearing loss [1]. The term ‘connexin’ is now commonly heard among hearing professionals, although it should be understood just what ‘connexin’ means, and also that there are both autosomal dominant and autosomal recessive forms of ‘connexin’ hearing loss. Genes function by encoding for proteins. Proteins are the basic building blocks for doing things in our bodies. Connexin is a protein product of a number of genes and various types of connexin have functions that are important to normal hearing, but there are also connexin producing genes that are not related to hearing.

Connexin is known as a gap junction protein because it is instrumental in the formation of normal communications between the cytoplasm of adjoining cells. Connexin proteins are necessary for the normal function of skin cells, neurons, muscle cells and essentially all other tissues. The term connexin has become important in the hearing sciences because of one particular type of nonsyndromic hearing loss caused by a mutation in a gene known as GJB2 that encodes for a form of connexin known as Connexin 26. Connexin 26, however, is not the only form of this gap junction protein that causes congenital nonsyndromic hearing loss. Connexin 30, 31, 32 and Connexin 43 have also been implicated. 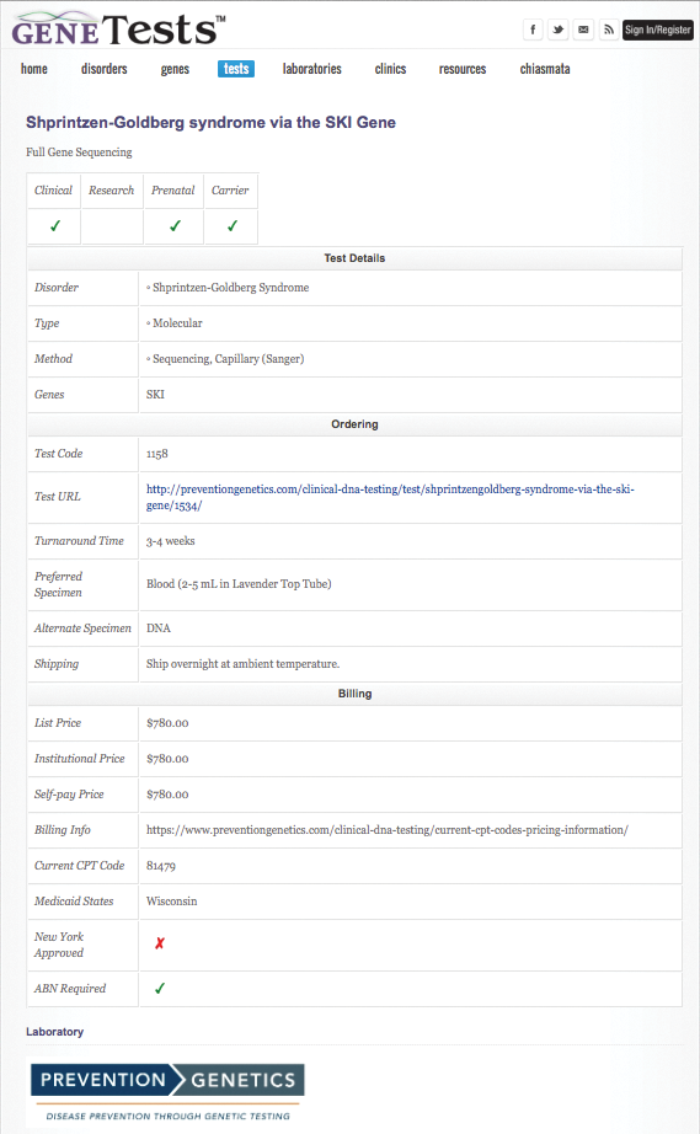 Most nonsyndromic hearing loss is inherited as an autosomal recessive trait so it is possible that neither parent of a child with Connexin 26 deafness would be affected, yet they continue to have a 25% risk for each pregnancy that the child will be affected. For this reason, screening tests have been developed for many of the major genes that cause nonsyndromic hearing loss. If the reader is interested, there is a web site that lists available gene tests, www.genetests.org (Figure 1) that will list available tests, the cost, the purpose of the test (clinical, research, prenatal screening), and information about the laboratory that does the test. The number of such tests has expanded enormously and will continue to expand at a rapid pace. However, it must be noted that clinicians must be aware that a sensorineural hearing loss in a child could be a sign of a genetic disorder even when the parents have normal hearing in order to suggest referral to a source for proper genetic counselling.

There are also genetic mutations that do not have a connexin connection. These other genes will affect various aspects of hearing, such as the formation of filaments of the hair cells, connective tissue in the inner ear, or formation of the cochlea and its components. Conductive hearing loss can also be caused by anomalies of the ossicles, fixation of the ossicles, all of which can occur either in association with syndromes or as isolated anomalies. Some of these traits are recessive, some are dominant, and still others are X-linked, meaning that the gene is on the X chromosome. Hearing loss can also be caused by mutations in mitochondrial DNA.

How much did you understand?

A lot of terms have been used in this article, and an important question would be, “How much did you understand?” Dominant, recessive, autosomal, mitochondrial, genomics, etc. This is not meant to be condescending. The fact is that few if any training programmes offer courses in genetics although the field of genetics is rapidly expanding every day with new terminology, new concepts and new discoveries at a pace that far outstrips almost every other field in science. It is therefore important for audiologists to seek out this information on their own. There are some excellent resources to accomplish independent study. Online resources are numerous and include a web site known as OMIM. OMIM is an acronym for Online Mendelian Inheritance in Man. OMIM catalogues many thousands of genetic conditions, listing the clinical findings, the genetic causes, references and narratives on the history of the disorder. The web site is an open access resource and is linked to PubMed, the online repository of almost all scientific and medical literature dating back 50 years and more. The OMIM web site can be found at http://www.ncbi.nlm.nih.gov/omim/ and PubMed can be found at http://www.ncbi.nlm.nih.gov/pubmed. Books are also available that are written specifically for audiologists and speech pathologists [2, 3]. If this sounds like a bit of work, it would be important to point out why it is worth the effort.

The term ‘genetic’ or ‘genomic’ (meaning the cause of the problem is related to a mutation of genetic material) is not the same as inherited. Genomic mutations can be limited to one person when they occur as spontaneous changes in DNA. DNA by nature is a relatively unstable molecule that undergoes changes without any external influence. If a spontaneous mutation occurs in a single egg or sperm, then a child can be affected with a genetic disorder that is not present in the parents. This type of mutation is almost always limited to dominantly inherited disorders. Recessive disorders require two genes with the same mutation in order to be expressed, and it would be highly improbable for the same mutation to happen in both genes in a gene pair by random chance. Once an abnormal trait is expressed in an individual, it can be inherited by that individual’s offspring. Patterns of inheritance include autosomal dominant, autosomal recessive, X-linked recessive, and X-linked dominant. An excellent description of these patterns and how they occur can be found in NH Robin’s excellent book written specifically for communication disorders specialists [2]. Why, then, is inheritance so important?

In 1966, the first successful wrongful birth law suit was brought in the United States, and has since been followed by many others. Wrongful birth suits are filed when parents claim that a child affected with severe congenital anomalies would not have been born had they known that there was a significant probability that the child was impaired. In some cases, the argument is that a pregnancy would never have been established if they had known of the probability, and in other cases following Roe vs. Wade being decided by the US Supreme Court, the argument is that a severely impaired child would have been aborted if the probability had been known and proper diagnostic testing was done. The question arises as to whom the liability spreads.

If an audiologist detects a hearing loss in a baby, there is a 50% chance that this baby has a genetic hearing loss. Because the autosomal recessive Connexin 26 cases make up a very high percentage of those cases, the parents who gave birth to that baby have a 25% chance of their next baby also inheriting the same problem. If the parents remain unaware of the fact that they are carriers, they may decide to have another child. However, if they do not want a child with a severe or profound sensorineural hearing loss, they could claim a wrongful life because no one told them that the hearing loss was possibly genetic. So, what is the audiologist’s responsibility? The liability may increase if the hearing loss is part of a syndrome that has more significant health considerations than an isolated hearing loss.

Beyond the legal issues, would it simply be important for audiologists to become part of the process of providing good patient care? It is not within the scope of practice for audiologists to diagnose a genetic condition, but if they are aware that half of the cases they see will likely have a genetic condition, it is clear that referral to a genetic practitioner or programme should be made either directly or indirectly through the primary care physician. The audiologist does not have to present the information directly to the patient, but can make the referring agency aware of possible genetic implications. It is simply good patient care to be aware of the possibilities. Responsibility for the patient’s welfare does not stop at the sound booth. Be aware, be involved, be responsible.

Robert J Shprintzen, PhD, is a speech-language pathologist specialising in the study of genetic syndromes and was awarded Honors of the Association by ASHA in 2013 for his work in genetics. Dr Shprintzen is credited for discovering four genetic syndromes that bear his name. His publications include more than 220 articles, 40 chapters and seven textbooks. He has made more than 1000 presentations worldwide. He recently founded the Virtual Center for Velo-Cardio-Facial Syndrome, an internet-based interdisciplinary service. 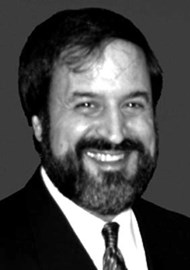