With a population of more than a billion people, and an estimated prevalence of hearing loss of somewhere between 5.9% and 16.5%, depending on which definition you use, India has a significant number of hearing impaired individuals. They are served by both a public health service and a private sector, but for various reasons this still remains a major social and health issue. Vinay Manchaiah explores this and provides a comprehensive view of the profession in India, its roots, development, challenges, and education and training pathways.

Population survey has revealed that over 21 million people in India suffering from some kind of disability, which is equivalent to 2.1% of the population. Estimated prevalence of hearing impairment in India varies significantly depending on the definition used [1]. The World Health Organisation (WHO) suggests a disabling hearing impairment of 5.9%, whereas National Sample Survey Organiation (NSSO) suggests a prevalence of 16.5% have some form of hearing disability [2]. Hearing impairment remains a major social and health issue in India, like many other disabilities.

Development of hearing healthcare as a profession

Indian traditional medicine, such as Ayurveda, Unani and Siddha has some treatment solutions to ear and hearing problems. However, various well-established audiological centres offer modern hearing healthcare services throughout the country. Traditional Ayurvedic medicine focuses on diet and natural herbs as a treatment solution to hearing loss with the view that these herbs will have a beneficial healing effect on the complete human body in a natural way, including the ear. Modern hearing healthcare is influenced by American rehabilitation models and offers hearing assessment and hearing rehabilitation with the use of modern technological devices such as hearing aids.

Generally, children born with significant hearing loss either learn sign language or use gestures. In recent years, audiological rehabilitation with amplification use is becoming popular and oral communication has become more prevalent.

India has robust training and education for audiologists compared to many low and middle-income countries. In 1965, the first audiology and speech language pathology programme was started at university level as a master’s programme. Currently there are over 50 institutes all over the country offering speech and hearing courses. The entry level for the profession as independent practitioner is a bachelor’s degree. The typical programme includes both audiology and speech language pathology, although various specialised master’s programmes in audiology are in existence. In addition, many universities offer certificate and diploma courses to train clinicians at a basic level and doctoral programmes to train clinical scientists at a higher level. It is estimated that over 10,000 people have graduated out of Indian speech and hearing schools since 1966, with an estimated 6000 to 7000 audiology professionals currently practicing in India.

The Indian Speech and Hearing Association (ISHA) is the professional and scientific association with over 2500 members, while the Rehabilitation Council of India (RCI) is the regulatory body that regulates training and professional practice.

“It is estimated that over 10,000 people have graduated out of Indian speech and hearing schools since 1966, with an estimated 6000 to 7000 audiology professionals currently practising in India.”

Graduates with a bachelor’s degree in speech and hearing sciences can choose to practise in either speech pathology, audiology or dually. Generally, the patient population these graduates see depends on the place of work. For example, those working in specialist audiology clinics may only see patients with hearing loss, tinnitus and imbalance, whereas those running their own independent clinic practice dually seeing patients with all kinds of communication problems. The RCI has regulations and guidelines on the scope of practice of audiologists and speech-language pathologists, although these regulations are not well enforced, resulting in many unqualified and underqualified people offering services to patients.

Audiologists in the private sector are greater in number than those in public sector. These facilities are generally equipped with all the necessary diagnostic instruments, and their work is mainly focusing on hearing aid dispensing. Services offered in the public sector are either paid or subsidised by the government. However, services offered by private facilities are generally paid for by patients, although in some instances various NGOs and charities may pay for them, especially for children.

“There is a need to better define the scope of practice for audiologists with different training levels and to develop standardised procedures for practice, which may result in more uniform service provision.”

Audiologists and otolaryngologists mainly offer specialist audiological services, although various other professionals such as general medical practitioners, teachers of the deaf, health workers and community volunteers offer some basic services at primary and secondary levels. Most audiological facilities offer services such as hearing assessment, selection and fitting of hearing aids and aural rehabilitation. However, services in more specialised areas such as cochlear implantation, vestibular assessment and management, assessment and management of auditory processing disorders, and tinnitus rehabilitation are offered by few specialised centres.

It is important to note that most audiological facilities are based in urban areas making it difficult for people in rural areas to access such services. A few public sector organisations and non-governmental organisations (NGOs) work to extend audiological services to rural and remote areas by conducting residential camps and appointing public health workers to facilitate identification of hearing disorders and appropriate referral. However, generally awareness of hearing healthcare in rural areas is still poor. Hence, although there is a great need, demand for audiological services in rural areas is limited and patients generally tend to travel to urban areas to use the available services.

Declaration of competing interests: Dr Manchaiah is the co-founder of Audiology India (NGO) and is currently serving on the Board of Directors.

Dr Manchaiah holds the positions Director of Audiology and Jo Mayo Endowed Professor at Lamar University. He has an audiology background and over the last 10 years he has worked in various clinical, teaching, research and administrative roles. He is the co-founder of Audiology India (NGO) and currently serves on the Board of Directors. He has published over 50 articles in scientific journals and magazines. He has a keen interest in developing research in low and middle-income countries, including in India. In his spare time he likes to travel and has visited 58 countries and hopes to go around the world. 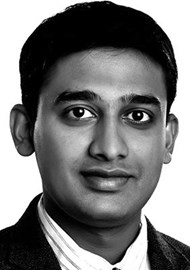