Hidden hearing loss in humans: cochlear synaptopathy is superseded by cognitive effects when listening to speech in noise
By Elizabeth Francis Beach

Elizabeth Beach presents an overview of the recent research being undertaken at the National Acoustic Laboratories on speech in noise and its relationship to cochlear synaptopathy.

Our team at the National Acoustic Laboratories (NAL) has been investigating hidden hearing loss (or cochlear synaptopathy) in humans using behavioural and electrophysiological methods. We wanted to determine whether those with greater noise exposures would demonstrate reduced brain responses and impaired speech-in-noise perception as predicted by the animal studies of Sharon Kujawa and Charles Liberman.

In 2009, Kujawa and Liberman published a research paper that set in motion a worldwide research effort into noise-induced cochlear synaptopathy or ‘hidden hearing loss’ [1]. In a series of research articles, they showed that single exposures to high-intensity noise resulted in significant damage and loss of presynaptic hair cell ribbons and postsynaptic cochlear nerve terminals despite hearing thresholds returning to normal after temporary impairment. Kujawa and Liberman suggested that noise-induced synaptopathy in humans may explain the hearing difficulties experienced by normal hearers in noisy environments, and may be a contributory factor in tinnitus and hyperacusis.

Like several other research groups around the world [2-4], we embarked upon a large-scale study to investigate cochlear synaptopathy in humans using both behavioural and electrophysiological methods conducted over two test sessions [5, 6]. Our aim was to determine whether those with greater noise exposures would demonstrate (a) a reduced auditory brainstem response – a lower ABR wave I amplitude would indicate hair cell ribbon loss, and / or auditory nerve fibre deafferentation – and (b) impaired speech-in-noise processing as predicted by Kujawa and Liberman [1].

At our research centre, we usually take a translational perspective in our work. We try to ensure that our research designs reflect real-world, clinically relevant situations. In this case, we felt it was important that our cohort included the types of people who might typically present at a clinic with speech-in-noise problems. As a result, we recruited over 100 normal-hearing participants in their mid-adult years with a wide range of noise exposures of differing origins: workplace noise, leisure and / or music-related exposures. Taking this approach differentiated our work from that of most other research groups, who have tended to focus on people under 35, often with a specific type of noise exposure, such as music [3].

To assess speech-in-noise ability, we used two relatively realistic speech-in-noise tests: (a) the high-cue condition of the LiSN-S, in which sentences rather than single words are heard in spatially separated babble noise; and (b) the NAL Dynamic Conversations Test, in which short monologues are heard in competing conversational noise while participants complete a written ‘on-the-go’ comprehension task.

Another key feature of our research design was the inclusion of several tests of cognitive functioning, including selective attention, attention-switching and working memory. We also included a visual correlate of the speech-in-noise task, the text reception threshold (TRT) test, which measures non-auditory language skills. In this test, a sentence is embedded in visual ‘noise’ (bars of varying width) and the participant’s task is to decipher the words shown. These additional tests were included because we wanted to determine the relative effects of noise-induced synaptopathy on speech-in-noise perception, when compared to other cognitive and non-auditory factors. 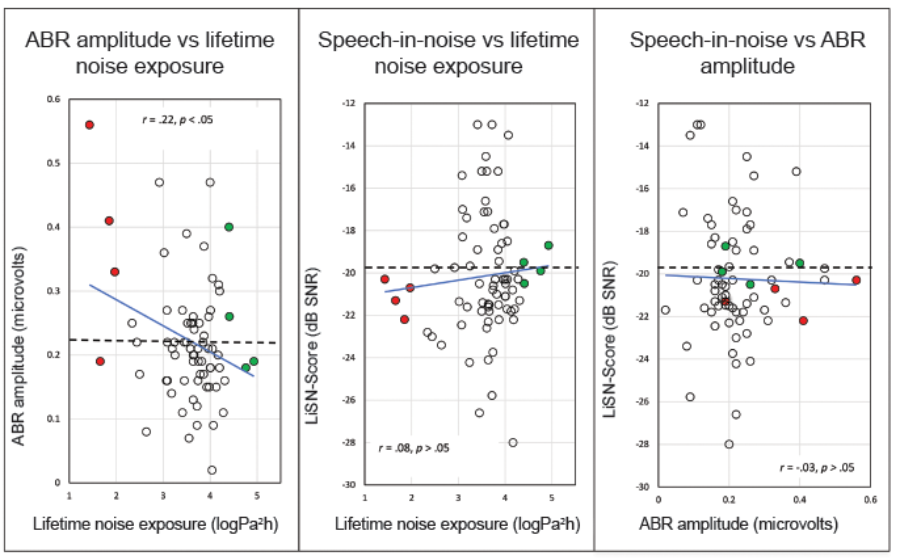 Our electrophysiology results showed that those with higher noise exposures had significantly smaller ABR wave I amplitudes than those with lower noise exposures, despite the large degree of variation in the amplitudes measured (panel A of Figure 1). A smaller brainstem response is consistent with the noise-induced synaptic damage described by Kujawa and Liberman and thus this result supports the notion that hidden hearing loss also occurs in humans.

However, our behavioural analyses showed that those with evidence of noise-induced cochlear synaptopathy did not perform more poorly on the speech-in-noise tasks. In contrast to the predictions of Kujawa and Liberman, poorer speech-in-noise scores were not correlated with more noise exposure (panel B of Figure 1) or smaller wave I amplitudes (panel C of Figure 1). What we did find were significant relationships between speech-in-noise performance and various cognitive factors, namely, attention, working memory and non-auditory language skills.

Apart from demonstrating the highly variable nature of cochlear synaptopathy in humans, this pattern of results implies that there are other factors affecting speech-in-noise processing, and the regression analyses conducted in our large-scale study revealed that these other factors include attention, working memory, and language skills. It seems that these factors play a more important role than cochlear synaptopathy in determining speech-in-noise outcomes.

Unlike the animal studies, where genetic characteristics, noise exposures and time courses can be highly controlled, humans do not come from a single genetic strain, and they present with highly variable exposures to noise in terms of duration, intensity and source. It is also possible that noise of higher intensity is needed to effect the same extent of injury in humans as in animals, and it may be the case that damaged neural elements can recover from noise injury at least to some extent. Given these uncertainties, it is unlikely that we will observe cochlear synaptopathy in humans that mirrors the animal model.

The work presented here contributes to the growing body of research that suggests that noise-induced cochlear synaptopathy in humans is a highly variable phenomenon, and we believe it is likely just one among several factors at play in determining an individual’s ability to understand speech in noise. Reaching a complete understanding of this highly complex and multifactorial process is likely to continue to elude both researchers and clinicians for some time to come.

This work was funded by the National Health and Medical Research Council [APP1063905, 2013]; and the Hearing Industry Research Consortium. This work was also supported by the Australian Government Department of Health, and the HEARing CRC, established and supported under the Cooperative Research Centres Program – Business Australia.

EB has been reimbursed by the Association for Research in Otolaryngology for presenting these results at the ARO Midwinter meeting. 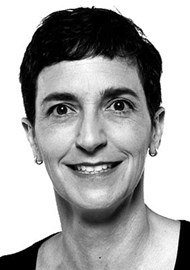