In the future, the rehabilitation of adults with hearing loss is likely to involve modern information technology. Using the Internet in the audiological rehabilitation process might be a cost-effective way to include additional rehabilitation components by guiding hearing aid users on topics such as communication strategies, hearing tactics and how to handle hearing aids. The development of online rehabilitation programmes might foster behavioural changes that will have a positive effect on hearing-aid users.

The latest figures from the World Health Organization (WHO) show that five percent of the world’s population have some kind of hearing loss; thereby, hearing loss is one of the most common disabilities worldwide [1]. In addition to the direct and obvious effects of a hearing loss, such as difficulties with hearing, speech, music and other (weaker) sounds, there are also a number of indirect psychological and psychosocial effects. Limited access to services and exclusion from communication can have a significant impact on everyday activities and quality of life, causing feelings of loneliness, isolation and frustration, particularly among older people with hearing loss [2]. For people of working age, the effects can manifest as trouble managing certain job situations and negative influences on relationships with spouses when misunderstandings and inactivity in conversations increase [3].

Research shows that in many health disciplines Internet interventions are used effectively, e.g. for patients with tinnitus, depression or anxiety [6]. Also in audiology the use of digital media and online tools in clinical processes is increasing as a means of goal planning and transferring information between appointments [7], as well as to improve cost-effectiveness during an intervention [8].

Two editions of an Internet-based rehabilitation programme for people with hearing impairments are developed and evaluated in two studies (Thorén et al., 2011; Thorén et al., 2014) [9, 10]. The programmes were developed for people who have been using hearing aids but who were not satisfied with their hearing situation. The participants never physically met the professionals or their peers who participated in the studies. The overall aim of the programmes was that participants would gain more knowledge and information about their hearing situation in order to become better at handling their everyday hearing situations. The Internet-based rehabilitation programmes were evaluated to span over five weeks and they included various elements such as tutorials, professional guidance from an audiologist but also the possibility to have contact with participating peers via Internet-based discussion forums. Each week, a new module with a new theme was presented for the participants. The themes included information about the sense of hearing, hearing aids and communication strategies.

The participants in the studies were asked to explore difficult hearing situations, such as parties or meetings, with many simultaneous sound sources. The programme was designed to let the participants make use of the knowledge in their own context, e.g. to be able to participate in a conversation based on the communication strategies they had learned in the course. The results of the studies showed that when using a structured, Internet-based rehabilitation programme the experienced hearing aid users who participated in the studies expressed that they had fewer problems in their hearing-related situations than they had before they participated in the studies (Figure 1). 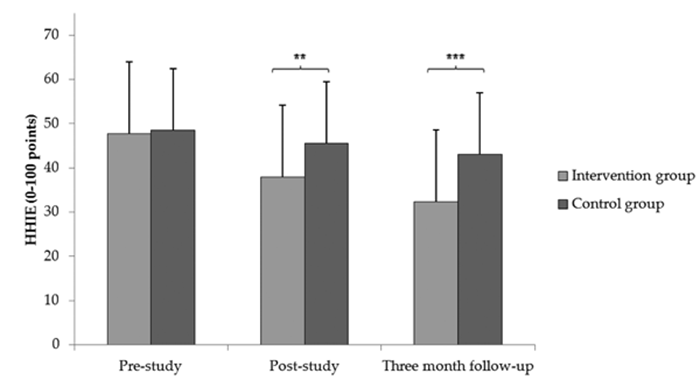 Figure 1: The results from the second study showed significant decrease on self-reported hearing related problems in terms of increase in activity and participation (questionnaire Hearing Handicap Inventory for the Elderly, HHIE) for the intervention group, while the control group did not improve. **p < .01, ***p < .001.

The results from the studies also showed that participating in the Internet-based rehabilitation programmes had positive effects in psychosocial domains. The effects were further improved at follow-up assessments three months after the study was finished. A year after the participants had been involved in the study they took part in an interview to describe their experiences of participating in an Internet-based rehabilitation programme. In the interviews the participants described how they had become more self-confident after they participated in the studies. To have a good level of self-confidence in difficult hearing situations is very important for effective communication, which in turns leads to better quality of life.

Participants appreciated that the rehabilitation programme was conducted via the Internet, mainly because of the flexibility, meaning that they did not have to plan and participate in any physical meetings. The participants also expressed appreciation of coming into contact with peers via the Internet-based discussion forums that were included in the study. On the discussion forum, only those who participated in the study could write, read and share the experiences they had of living with hearing loss. The participants gave each other tips and inspiration on how they could handle different hearing situations. Being able to recognise themselves in others’ situations and to have confirmed that they are not the only ones struggling with hearing impairments was described by several participants as very positive and rewarding.

In conclusion, the results from our studies provide evidence that the Internet can be used to deliver education and rehabilitation to experienced hearing aid users who report residual hearing problems and that their problems are reduced by the intervention; however, the content and format of the online rehabilitation programme does require further investigation.

Declaration of Competing Interests: Elisabet Thorén is employed by the Danish hearing aid manufacturer Oticon. The work discussed in this article was funded by the Oticon Foundation, in part by a programme grant from the Swedish Research Council for Health, Working Life and Welfare (FORTE), and the Swedish Hard of Hearing Association (HRF).

Dr Elisabet S Thorén manages eHealth projects at Eriksholm Research Centre. Dr Thorén received her MSc in Medical Science, from Lund University, Sweden in 2002, where she also majored in audiology and she is a certified audiologist. In 2014 she obtained her PhD in Medical Science from Linköping University, Sweden. The topic of her PhD thesis was ‘Internet Interventions for Hearing Loss – Examining rehabilitation, self-report measures and Internet use for hearing-aid users’. Dr. Thorén’s research area includes tele-audiology, the relationships between cognitive abilities and hearing loss, as well as the rehabilitation process of adults with hearing loss. Her work has resulted in peer-reviewed papers, patents and has been presented at numerous international hearing aid conferences. 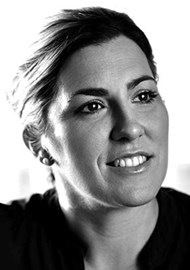