Lyric 24/7 hearing: could it help those with tinnitus?
By Jacob Johnson

Since its launch in 2008, Lyric represents the first and only device of its kind establishing a new category of hearing solution: 24/7 extended wear. Lyric is placed several millimetres within the ear canal, near the tympanic membrane, so it is 100% invisible, and worn 24 hours a day for months at a time. Lyric is worn during all daily activities including showering, sleeping and exercising.

This frees the wearer from typical hassles presented by traditional hearing aids, including multiple daily device insertions or removals, battery changes, and cleaning. Moreover, the placement of the device near the tympanic membrane enables the anatomy of the ear to naturally transform sound before it enters the Lyric microphone for amplification (Figure 1). 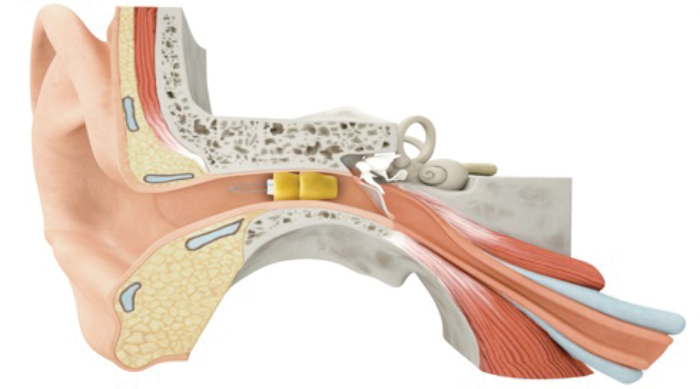 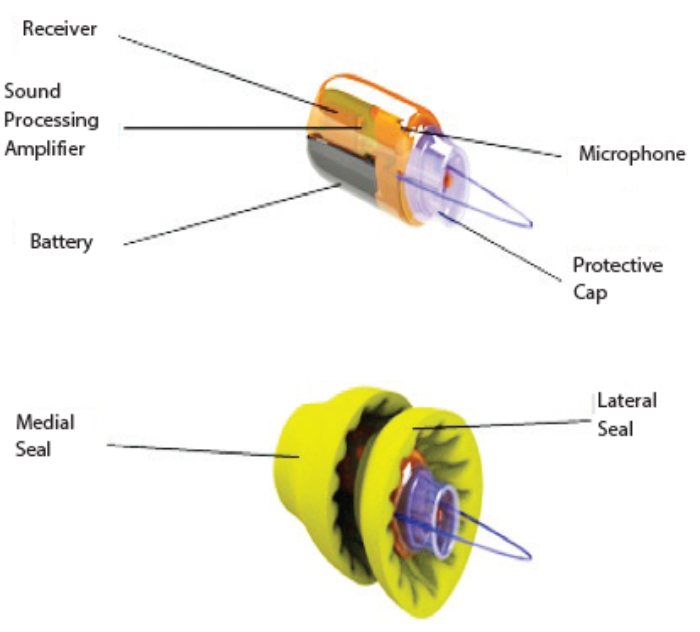 Figure 1: Lyric hearing aid. The Lyric device is designed to sit beyond the second bend of the ear canal within 4mm of the tympanic membrane. The key barrier crossed by Lyric technology is how to have a hearing device function for an extended period of time in the warm, humid, acidic, oily, migrating ear canal while maintaining ear canal health. The three core enabling technologies include biocompatible materials and design, long life battery, and low power circuit.

Lyric not only delivers significant acoustic, practical, and cosmetic benefits to wearers, but it also offers practical improvements to the option of daily wear devices. Patients report ease of use with the phone, in wind, hearing important sounds during the night and never misplacing their hearing devices. Lyric also provides a new opportunity to understand how continuous auditory stimulation could impact patients with mild to moderate hearing loss – and more specifically, patients with tinnitus.

Subjective tinnitus, the phantom perception of sound with no identifiable sound source, significantly reduces an individual’s quality of life [1]. The tinnitus patient lives with a complex constellation of symptoms including challenges to sleep, concentration, and cognition that, over time, can include anxiety, anger, depression, and loss of control [2]. Additionally, these patients have well-characterised alterations in neuronal activity in auditory and non-auditory pathways [3]. 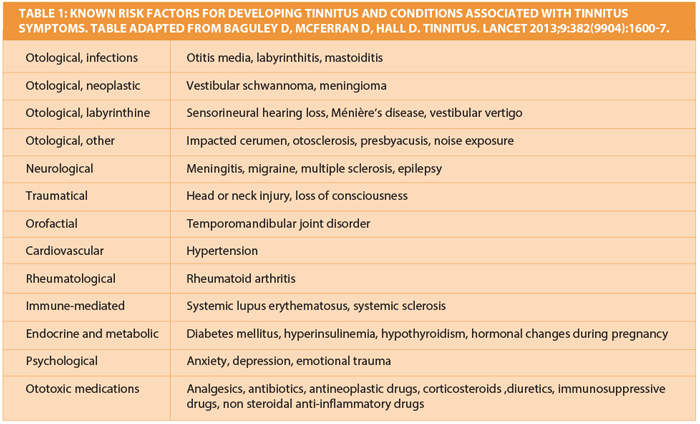 For the practitioner, evaluation and care of tinnitus is complicated by the diversity of clinical presentations, the lack of a single underlying cause (Table 1), patient co-morbidities, wide promotion of non-proven treatments, the variability in treatment response, and the neediness of the patient. Treatment also requires a variety of types of intervention that are not easily provided by a single practitioner.

However, a common underlying pathophysiology shared by tinnitus patients is that 80% have a concomitant hearing deficit that they are often not aware of [4]. Subjective tinnitus has an estimated 10-14% prevalence worldwide [5] and tinnitus patients are in the office with increasing frequency because, different from the 10% of people living with self-reported sensorineural hearing loss, tinnitus patients are strongly motivated to seek information and find treatment.

Research suggests that patients with chronic tinnitus can experience relief when provided increased input into the auditory pathway with a hearing aid [6, 7]. However, there are a few characteristics inherent to traditional hearing aid wear that can limit the potential benefits. First, these devices often require a few months of wear before patients adjust to amplification. Second, traditional hearing aids typically have low adherence in many patients, and must be removed throughout the day for a variety of common activities, like showering, exercising, and especially sleeping [8]. The result is that the increased auditory input provided by the device is not consistently present, and is conspicuously absent when tinnitus is most bothersome during the quiet nighttime hours.

The study selected patients who reported continuous tinnitus for at least one year. Exclusion criteria included hearing loss outside of the Lyric fitting range, previous experience with Lyric, hearing aid use within one year, any tinnitus treatment within the last month, use of tinnitus-inducing medication, drug or alcohol abuse, smoking, any contraindications to Lyric wear, significant health issues, Tinnitus Functional Index (TFI) scores less than 25, and moderate or severe depression or extreme stress as measured by the Patient Health Questionnaire-9 (PHQ-9) and the Perceived Stress Scale (PSS), respectively.

The TFI provides a validated tool that scales the overall severity of tinnitus and the negative impact of tinnitus in eight subdomains in each patient, as well as responsiveness to treatment. Specifically, the TFI evaluates eight domains of tinnitus impact on a 0-10 response format: intrusive, sense of control, cognitive, sleep, auditory, relaxation, quality of life, and emotional [9]. The total score is then scaled 0-100, with >18 representing a small problem, >31 representing a moderate problem, and >51 representing a big problem.

Secondary measures included the PSS, and PHQ-9. The PSS measures nonspecific perceived stress, and the degree to which patients perceive that their demands exceed their coping ability. The PHQ-9 is a self-administered screen for depression.

After initial TFI evaluation, each patient was assessed for appropriate candidacy for Lyric according to existing Lyric provider guidelines. Criteria include a healthy ear canal and tympanic membrane, generally healthy patient, appropriate audiologic profile of mild to moderate hearing loss, and adequate ear canal geometry. Then, the device is placed and programmed by a Lyric trained and certified hearing care professional, and patients return approximately every two to three months for a ten-minute device replacement.

Following assessment, participants were fitted with Lyric binaurally to wear continuously for three months. TFI was evaluated at baseline, two weeks, one month, and three months of Lyric wear. The study audiologists were instructed not to provide any additional tinnitus counselling or supportive measures in order to isolate the benefit of continuous, increased auditory input from Lyric.

The 15 study participants had an average age of 62 (42-74), across nine males and six females. Based on initial TFI score stratification, 33% had a small problem, 50% had a moderate problem, and 17% had a big problem with tinnitus. The severity of the tinnitus did not correlate with the patients’ hearing loss but rather had a linear relationship with their PSS and PHQ-9 scores, showing the influence of stress and mental health measures on tinnitus experience.

Most studies of tinnitus measure the impact of treatment at two to four months however, given the continuous nature of auditory stimulation from an extended wear hearing device, it was of interest to evaluate how quickly any effect could be recorded. Encouragingly, all enrolled patients were subjectively aware of an immediate reduction of tinnitus at the Lyric fitting appointment. 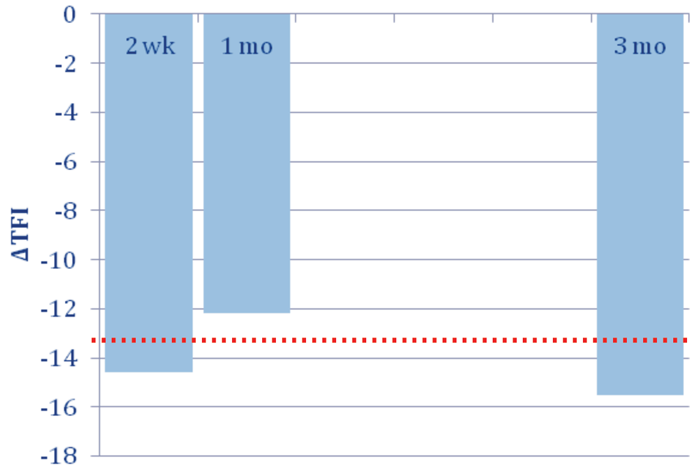 At the two week evaluation, the ‘moderate problem’ group achieved a meaningful overall TFI reduction which was maintained at the three month evaluation (Figure 2). On average, patients experienced a decrease in tinnitus impact on all eight domains throughout all time points, with the exception of the ‘cognitive’ domain at two weeks. The greatest improvements were observed in ‘auditory’, ‘intrusive’, ‘sleep’, and ‘quality of life’ subscales, however, only the ‘auditory’ subscale improvement approached statistical significance (Figure 3). This reflects the fact that regardless of patient awareness of hearing loss at study start, patients observed a significant improvement in their hearing loss associated with their tinnitus.

Figure 3. Changes in TFI subscales over time in the ‘moderate problem’ group.

Until findings from more studies are determined, there are several recommendations that can be adopted immediately to benefit not only tinnitus patients, but also the practices that treat them.

First, it is important to recognise that tinnitus patients are uniquely motivated to seek treatment, unlike normal hearing loss patients, and if satisfied with the mitigation of their symptoms tend to be loyal to their practitioners.

Second, tinnitus patients should be objectively graded at intake using auditory, medical, and psychological measures for correct evaluation, which can lead to better diagnosis and treatment. The creation of a multidisciplinary team who can address the auditory, medical, and psychological aspects of tinnitus reduces the burden of care on any individual practitioner while providing the comprehensive care needed by tinnitus patients [10].

Finally, while continuous wear hearing aids seem to show promise in treating tinnitus on their own, research shows counselling in addition to amplification can do even more to return tinnitus patients to an improved quality of life [6]. As no counselling was built into this pilot study, we can imagine another study regarding the levels of tinnitus relief that could be possible if Lyric was used in combination with a comprehensive, structured treatment plan addressing all aspects of the problem.

Declaration of Competing Interests: JJ is a Consultant with Phonak.