Mindfulness based approaches to tinnitus management: meditations on a new approach
By Elizabeth Marks and Laurence McKenna

There is now widespread agreement that an individual’s interpretation of tinnitus can determine how distressing they find it. If tinnitus is regarded as non-threatening then habituation normally follows. If, however, tinnitus is interpreted as threatening, habituation is impeded by a vicious cycle of interacting cognitive, emotional and behavioural factors that perpetuate tinnitus distress. In this conceptualisation distress is not inherent in tinnitus but is caused by a patient’s reaction to the experience.

Distressed patients commonly express thoughts about tinnitus destroying their life, driving them mad or ruining the future. Such negative thinking patterns provoke strong emotions, increasing the threatening nature of tinnitus and leading to behavioural changes (e.g. attempts to mask tinnitus, avoid situations that exacerbate it or trying hard not to think about tinnitus). This ‘battle’ exhausts the patient, making tinnitus an enemy which becomes the centre of attention and habituation fails.

The futility of struggling against our experience is exemplified by the psychological phenomenon of the paradoxical effects of thought suppression. Try this for yourself with the paradigm created by Daniel Wegner (1987) [1]: Over the next 60 seconds, try as hard as you possibly can to not think of a white bear… What do you notice? Typically, attempts to suppress a thought result in its recurrence. Suppression of thoughts (and other experiences) is a maladaptive self-control strategy that reproduces the very object of preoccupation that it seeks to eliminate. It is a common response to tinnitus.

We offer this thought experiment as an invitation to consider an alternative solution. If fighting with tinnitus perpetuates tinnitus related distress then what happens if we stop fighting? An answer to this can be found in the study and practice of mindfulness meditation, a relatively new approach to tinnitus that involves ‘turning towards’ the symptom and the experiences associated with it. 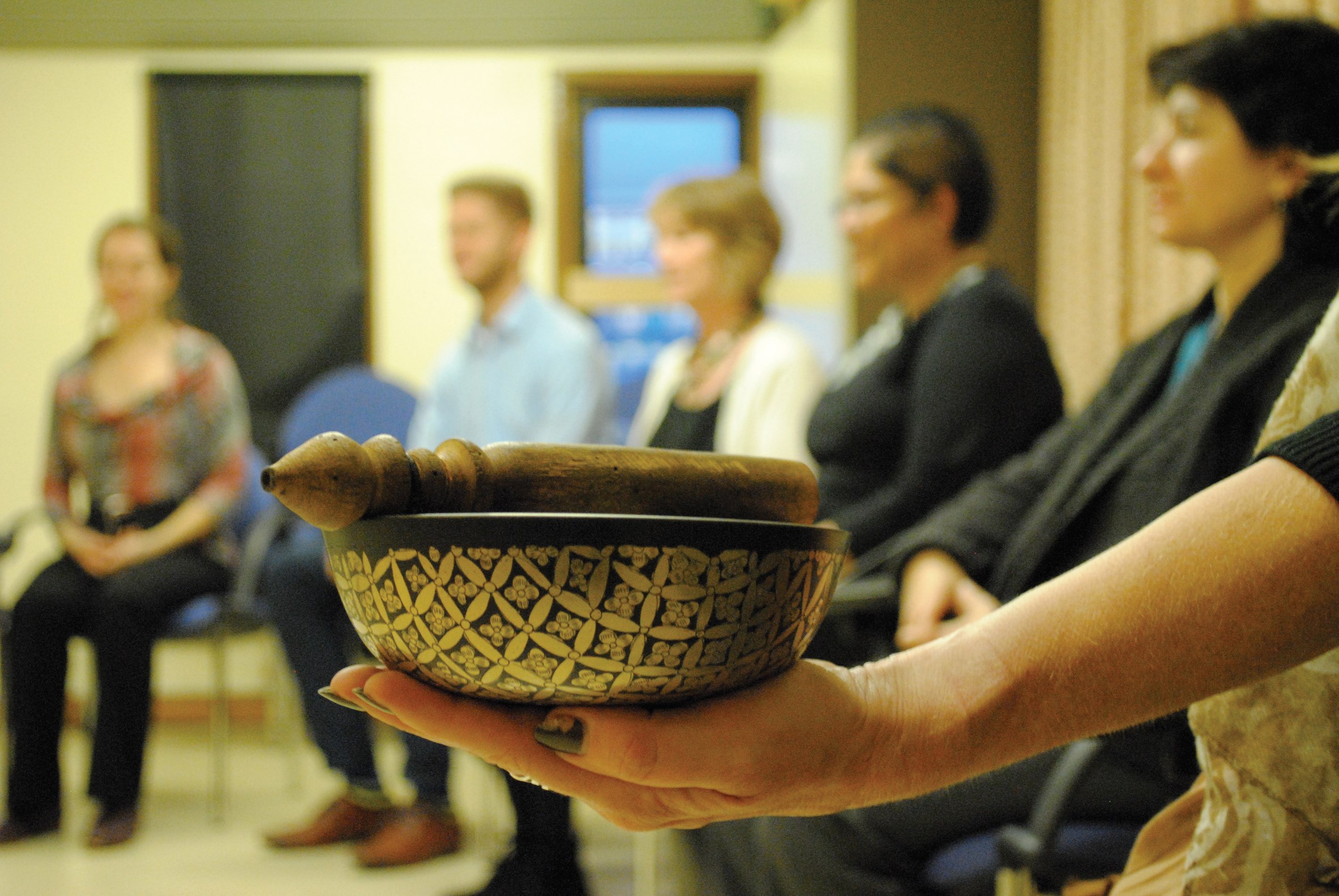 Singing bowl rung to mark the start and end of formal meditation exercises.

What is mindfulness meditation?

“Paying attention in a particular way: on purpose, in the present moment and non-judgementally.” (Kabat-Zinn)

Mindfulness is an ancient Buddhist meditation practice that has been secularised and integrated with modern psychological knowledge. This new development in behaviour therapy is known as Mindfulness Based Cognitive Therapy (MBCT). MBCT is a therapeutic approach shown to produce enduring benefits in health and well-being, and in various chronic health conditions such as chronic pain, cardiovascular disease and depression. Meta-analysis shows medium to strong effect sizes on variables such as quality of life and emotional state [2]. MBCT is indicated in the management of recurrent depression [3].

There is growing interest in the application of mindfulness to the care of tinnitus patients. A recent clinical audit from a group led by an Italian otologist indicated reductions in tinnitus distress and electroencephalography (EEG) changes suggestive of reduced stress arousal in a group of patients [4]. The only controlled trial to date, carried out by Philippot et al. (2011) found MBCT led to greater and more sustained reductions in distress than relaxation training [5]. Three clinical trials investigating mindfulness with tinnitus patients are currently listed on ClinicalTrials.gov.

Mindfulness meditation is simultaneously simple and challenging. A comprehensive training that integrates mind and body; it leads to changes in how we relate to our experiences, particularly difficult experiences. Mindfulness teaches us to pay close attention to all experiences (thoughts, emotions, sounds and body sensations), moment by moment. It teaches us to observe experiences deliberately rather than automatically reacting to them. It involves learning how to notice experiences without judging, changing or fighting them. As a result we can be better at coping with and even accepting whatever arises, including the challenges of tinnitus.

Mindfulness involves formal and informal practice. Formal practice involves spending time (usually daily) meditating on particular aspects of our experience. Informal practice involves bringing the quality of non-judgmental awareness to our everyday lives. You can try this next time you wash the dishes, or take a shower. Rather than being on ‘auto-pilot’ choose to deliberately notice how the warm water on your skin feels… how the soap bubbles look… listen to the splashes of water…, as if you were experiencing this activity for the first time.

Why should mindfulness help individuals with tinnitus?

The founding attitudes of mindfulness include kindly interest, curiosity, non-judgment and acceptance. Patients are encouraged to experiment with bringing such attitudes first to their general experience and then to tinnitus. This is often fundamentally different from anything they have tried before, and may seem counter-intuitive and challenging. Nonetheless, it can radically change a person’s relationship to tinnitus.

We have adapted the standard eight week course of Mindfulness Based Cognitive Therapy (MBCT) [6] to allow for an exploration of tinnitus rather than the original focus upon depressive symptoms. The programme begins with meditations that focus upon general aspects of experience – eating, the body, movement and the breath. Only after several weeks are people invited to bring their awareness to the potentially more threatening experience of tinnitus.

Since the proposition of deliberately observing tinnitus understandably elicits anxiety, the group is designed to be supportive. Patients are in control of their own meditation and encouraged to ‘experiment’ only as much as they feel able to do so. The members of the group can discuss their experiences and sometimes report the surprising discovery that tinnitus is not as threatening as expected.

Over time, participants become more aware of their habitual reactions to tinnitus and other difficulties in their life. They notice the negative thoughts, selective attention towards tinnitus, strong emotions and avoidance behaviours that fuel tinnitus distress. With increasing clarity, patients can learn to adopt more helpful responses to tinnitus.

Our experiences with mindfulness and tinnitus distress

Since 2008, we have taught 15 MBCT groups for people distressed by tinnitus at the Royal National Throat Nose and Ear Hospital. Evaluation of these clinics has shown clinically significant improvement (applying a reliable change index on standardised questionnaire measures) in tinnitus distress and emotional well-being for the majority of patients. Feedback from patients reflects the positive nature of their experience, this often has a scope much broader than simply tinnitus:

“The mindfulness course I attended for tinnitus gave me many practical and effective ways of alleviating my distress. It has improved my well-being and my everyday life. It has proved to be a positive and lasting gift – and I know many of the people on the course feel the same.”

“Completing the mindfulness course gave me a tool with which to finally try to cope with tinnitus and the resultant stress. It was not a cure and was never sold as such but it offered a way of approaching life, not just tinnitus, which showed that there were ways of trying to alleviate the significant distress caused by this chronic condition.”

“Mindful meditation helped me to think (and not think) about tinnitus in ways that had not occurred before, and in doing so made tinnitus much less of a burden to carry. It did not fix my tinnitus but it fixed me in a way that made tinnitus easier to bear. I now feel as if I live in the same universe as everybody else. I wouldn’t be anywhere else.”

The growing scientific evidence that mindfulness is useful in chronic health problems, and our own clinical evaluation, has inspired us to investigate further. We are beginning a randomised controlled trial, comparing the outcomes of MBCT and relaxation training for patients with distressing tinnitus. This research is being supported by the British Tinnitus Association.

Mindfulness meditation courses are available within some NHS trusts for particular conditions. As far as we know our programme and a mindfulness based therapy approach at the University Hospital of Wales are the only ones specifically for tinnitus patients. General mindfulness courses are taught across the UK and many books and CDs are available for those interested in exploring this further. 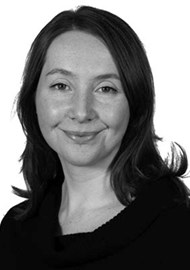 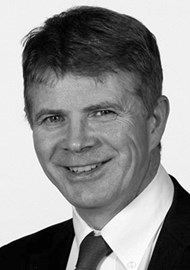