There are many good reasons to start using multifrequency tympanometry as opposed to a traditional, single 226Hz probe tone. Here, Leigh Martin of Interacoustics discusses the uses and benefits.

Tympanometry is a core test in the audiologist’s test battery. In adult patients, clinicians typically present a 226Hz probe tone to conduct such measurements whereas, in infants, 1000Hz is chosen. But can looking at alternative frequencies provide additional information?

Literature suggests that the reason audiologists use the 226Hz probe tone dates back to the 1970s when instrument limitations and calibration difficulties led to the adoption of this choice of frequency [1]. However, there has always been discussions of measuring the characteristics of the middle ear at alternative frequencies. In 1972, Liden et al, stated their preference to be 800Hz as it more closely replicated the resonance frequency of the ossicular chain [2]. It was this work which later contributed to the probe tone choice of 1000Hz in infants today.

In the 80s and 90s, researchers began looking at testing multiple frequencies at the same time. A tone sweep method for estimating the resonant frequency of the middle ear was developed, centred around the frequency range 100–2000Hz [3]. Despite showing some promising results, a survey of clinician’s use of tympanometric measurements in 2012 showed that 77% of audiologists in the US had never used such measurements. The reasons cited were equipment availability, training and time [4].

Today, tympanometers are versatile and capable of performing sophisticated measurements quickly and reliably. As a result, we have seen the emergence of new tympanometric techniques which can test multiple frequencies. Most notable of these is wideband tympanometry (WBT). Wideband tympanometry is a tympanometric method developed by Douglas Keefe at Boys Town National Research Hospital in the 1990s. Instead of using a single probe tone or a pure tone sweep, wideband tympanometry uses a click stimulus to measure the function of the middle ear. Performing the test in the clinic is therefore identical to performing classic tympanometry. But by measuring the entire frequency range of 226Hz–8000Hz, clinicians are able to look at the function of the middle across a broad range of frequencies.

This method has been shown to be able to distinguish between patients with complex middle ear conditions such as otosclerosis, ossicular chain discontinuity and superior semi-circular canal dehiscence. However, an even greater benefit may lie in improving the accuracy and simplifying tympanometric measurements in infants and new-borns [5].

It is important to remember that although 226Hz and 1000Hz tympanometry are good tests, they do not hold 100% sensitivity and specificity for detecting middle ear problems in children. A study by Sanford et al in 2009 showed that in order to increase the accuracy of tympanometry, we need to look at the frequency ranges where normal ears and pathological ears differ the greatest [6]. The results from this group’s study show that in neonates, the area between 800Hz and 2000Hz shows the largest difference, and we should therefore preferably be looking at these frequencies in order to detect middle ear problems.

Figure 1. A wideband tympanometry result using Interacoustics Titan from a child who is eight months of age. The left graph shows the 226Hz tympanogram, the centre 1000Hz and the right shows the wideband averaged tympanogram. This averages tympanograms from 226Hz–2000Hz in infants older than six months.

Wideband tympanometry presents clinicians with a new tympanogram: the wideband averaged tympanogram. This is an optimised tympanogram designed to look for the presence of middle ear effusions. In infants below six months, all tympanograms within the frequency range 800–2000Hz is displayed in a single curve and over six months the frequency range 375–2000Hz is used. This wideband average tympanogram comes with normative data, providing clinicians with additional interpretation guidance. Figure 1 shows an example of a measurement on a child who is close to eight months of age. The 226Hz and 1000Hz measurements are both doubtful while the wideband tympanogram is very convincingly positive for a middle ear problem.

Any clinician who performs tympanometry on infants will know that getting good quality results from a challenging child can be difficult. Children who move or cry often cause artefacts in the recoding, resulting in the need to repeat the measurement several times in order to obtain a clear result.

The wideband averaged tympanogram helps you arrive at reliable conclusions, even when noise is present. This is because it quickly averages over 30 tympanograms in order to produce a single graph. Therefore, noise and artefacts cancel out, leaving a clearer and easily interpretable tympanogram, which most often does not need to be repeated, ultimately saving time. The example in Figure 2 is obtained from a one-month-old healthy baby and demonstrates that the 1000Hz tympanogram cannot be interpreted with confidence, while the averaged tympanogram shows a convincingly negative middle ear pressure. Furthermore, test time is not increased as this measurement can be performed in the same time as traditional tympanometry.

Measuring the status of the middle ear in patients with pressure equalisation tubes (PE tubes) is not possible with traditional 226Hz tympanometry. When a PE tube is placed in the tympanic membrane, a tympanogram will show a flat curve, and the equivalent ear canal volume reading is expected to be larger than that of the ear canal of the patient. This method does not provide the clinician with any information regarding the middle ear function, with the exception that it is assumed that the PE tube is open. 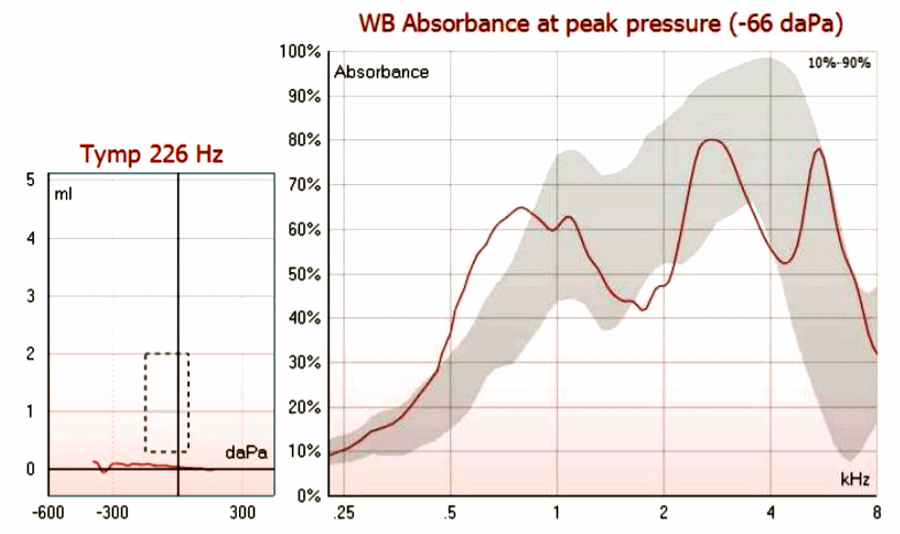 Figure 3. The left graph shows a Type B 226Hz tympanogram in a child a patent pressure equalisation tube. The graph on the right displays middle ear absorbance as a function of frequency using the Interacoustics Titan. The grey shaded region represents age matched normative data. Notice the peak outside the normative data at 600–800Hz. This is commonly seen in other with patent pressure equalisation tubes.

“The wideband averaged tympanogram helps you arrive at reliable conclusions, even when noise is present.”

In summary, measuring the middle ear function at different frequencies during tympanometry can provide clinicians with a better understanding of the middle ear condition. Wideband tympanometry allows clinicians to record and analyse these frequencies in the same time and effort as standard tympanometry. There are many clinical applications related to this technology, with this article highlighting that this technique can improve the sensitivity and ease of measuring middle ear function in both paediatric and adult patients. 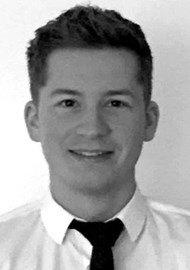