Neural plasticity refers to an ability of the brain and central nervous system to change their structure and function or their reorganisation in response to environmental cues, experience, learning, behaviour, injury and / or diseases and treatments. Neural plasticity is directly or indirectly related to aural rehabilitation. A better understanding of the mechanisms of neural plasticity and its relationship with aural rehabilitation may contribute significantly to improvement in audiological management of damaged or lost auditory function.

“In cochlear implantation, neural plasticity is associated with deprivation of auditory input, adaptation to the absence of stimuli, and neural reafferentation provided by cochlear implants.”

In cochlear implantation, neural plasticity is associated with deprivation of auditory input, adaptation to the absence of stimuli, and neural reafferentation provided by cochlear implants [2]. The recovery of hearing after cochlear implantation (CI) was mainly found in the bilateral middle and superior temporal gyri, corresponding to Brodmann areas 21 and 22. The neural activity of these areas was significantly stronger when CI users listened to running speech than when they listened to multi-talker babble. A significant difference between CI users with postlingual hearing loss and CI users with prelingual hearing loss was observed.

“Future studies should be focused on the relationship between the auditory performances induced by each factor and the changes in neural plasticity after cochlear implantation.”

Many studies provide direct evidence of a strong correlation between neural plasticity in the central nervous system and changes in auditory performance from amplification. However, as we know, the auditory benefits provided by hearing aids can be affected by many factors including device centred variables such as directional microphone, signal processing and gain settings and people centred variables such as age, attention, motivation and biology [3]. We are not yet aware of a clear relationship between each factor affecting the hearing aid performance and the corresponding cortical plasticity.

Exposure to strong noise induces oxidative stress exceeding the capacity of the antioxidant defence mechanisms in the cochlea through excessive formation of free radicals including reactive oxygen and nitrogen species, which leads to hair cell damage and sensorineural hearing loss. Pharmacological interventions for the prevention or treatment of noise induced hearing loss have been developed by antioxidant drugs increasing the antioxidant defense system destroyed in the cochlea. These antioxidant drugs include N-acetyl-L-cysteine (NAC), acetyl-L-carnitine (ALCAR), and phenyl-N-tert-butylnitrone (PBN), disufenton sodium (NXY-059), and 4-hydroxy PBN (4-OHPBN), which help a recovery of the degenerated synapses in the dorsal cochlear nucleus and brain after noise induced hearing loss [4,5].

Declaration of Competing Interests: This research was supported by the Basic Science Research Program through the National Research Foundation of Korea (NRF) funded by the Ministry of Education (2012R1A1A4A01017139).

Dr Chul-Hee Choi is the Dean of the Graduate School of Medical Sciences and the Graduate School of Health Sciences, Professor of Audiology & Speech-Language Pathology at the Catholic University of Daegu, Director of the Research Institute of Biomimetic Sensory Control, and Director of the Catholic Hearing Voice Speech Center at the Catholic University of Daegu, Gyeongsanbuk-do, Republic of Korea. Dr Choi obtained his doctoral degree (PhD) from the University of Kansas Medical Center in Kansas City, completed his post-doctoral research training at the Baylor College of Medicine in Houston, and worked as a research scientist at Hough Ear Institute and Oklahoma Medical Research Foundation in Oklahoma City, USA. 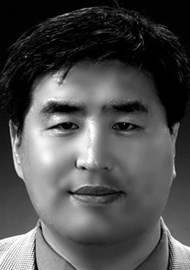