Richard E Gans is a renowned expert in the areas of vestibular evaluation and rehabilitation techniques. In the first of two articles (see here for the second article), Dr Gans gives an overview of the approach he and his team at The American Institute of Balance take to paediatric vestibular evaluation.

The success of early neonatal hearing testing has significantly improved our ability to identify infants at risk for equilibrium dysfunction, due to the comorbidities of hearing loss and vestibular dysfunction. Prior to the early diagnosis of congenital hearing loss, balance dysfunction in infants and young children was not typically even considered. It is estimated that over 500 syndromes and nonsyndromes are known to have an audiovestibular expressivity [1].

Recent investigators have reported as high as 90% abnormal cervical vestibular evoked myogenic potentials (c-VEMP) responses in children with congenital SNHL hearing loss [2]. The emerging use of neonate and infant c-VEMP data suggests a much higher incidence of vestibular dysfunction than the 30-50% previously estimated [2,3,4,5]. At The American Institute of Balance we regularly test high-risk infants with c-VEMP beginning at three months of age, using a variety of techniques, as can be seen in Figure 1. In addition to c-VEMP we include rotary chair and video head impulse test (vHIT) with older infants at 10+ months. 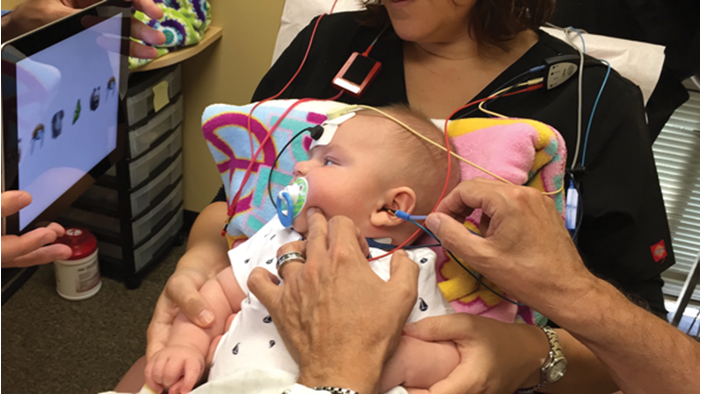 Figure 1: Testing a three month-old high-risk infant with c-VEMP at The American Institute of Balance.

Intact vestibular function is just as critical to the infant’s physical and motor development as is normal hearing for speech and language acquisition. The majority of equilibrium problems in infants and children manifest as balance problems not as vertigo or dizziness. Delayed maturational motor milestones typically evidence the equilibrium dysfunction. It is important to ask the parents about the child’s motor development timeline as well as to make your own observations. Possible indicators of peripheral-central vestibular dysfunction may include the infant’s inability to hold the head upright, as well as delayed crawling, standing and then walking. Benign paroxysmal vertigo of infancy (not to be confused with BPPV), a classification of migraine, is the one condition, however, most likely to produce symptoms of vertigo in children [6].

Testing infants and young children with c-VEMP is the most reliable, sensitive and easy method of electrophysiological assessment. However, when advanced testing is unavailable, behavioural and physical assessment can provide a simple, attainable and cost-effective screening method. 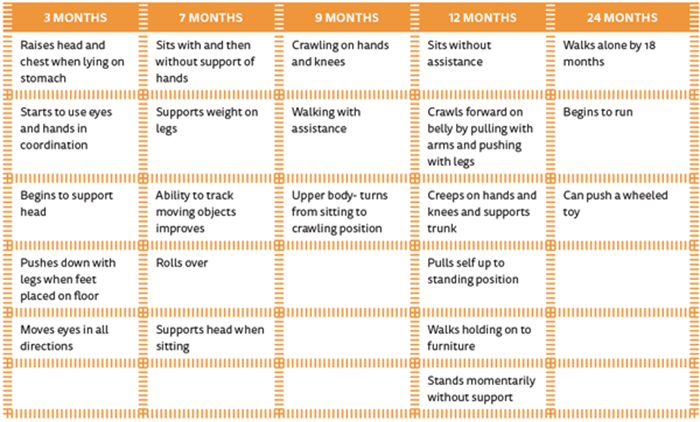 A good case history is essential and should come from speaking with the parents and asking about when the infant’s major milestones were achieved. These are age-specific with normative data in the form of maturational motor milestones as shown in Table 1. Just as we do with hearing testing, much of the evaluation is child-directed. Evaluations can be accurately conducted as early as three months of age with neonates who are suspected of congenital hearing loss. Three months of age is preferable because time is needed for the neck musculature to mature enough that the child can begin to hold its own head upright.

Vestibular signals interact in a complex manner with other systems to produce a number of postural reflexes. The cerebellum appears to play a key role in these interactions, which can involve limb and neck proprioception, touch, vision and descending cortical influences relayed to the vestibular complex primarily via the reticular formation. The various sensory modalities interact to provide information to the postural control system. Descending pathways responsible for postural reflexes include the vestibulospinal and reticulospinal tracts. Both receive signals from the vestibular end organ and both are strongly influenced by cerebellar efferents. Descending motor control of the neck musculature is more closely linked to the vestibular end organ and to the semicircular canals. Limb muscle reflexes are more closely linked to input from several sensory systems. 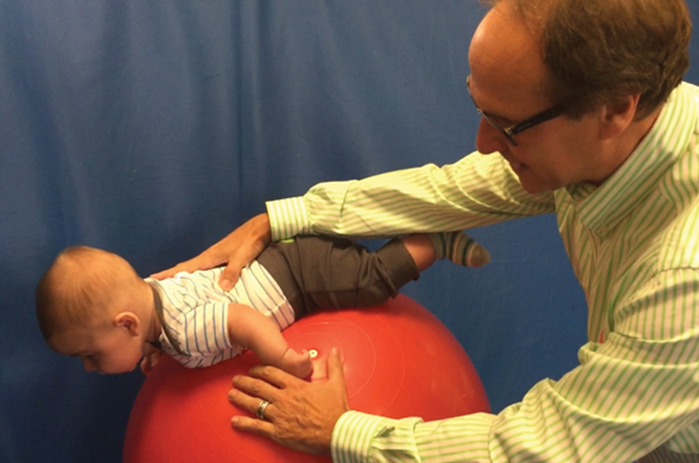 Lifting the child in space or changing the child’s position while on a variety of movable surfaces can test righting reflexes and equilibrium responses. An example of this can be seen in Figure 2. The three-and-a-half month old infant is rolled downward on a physio-ball watching for a Landau reflex. Note how the infant raises his head and lifts his legs. Lateral tilt, for example, activates utricular receptors, which in turn excite vestibulospinal neurons and influence the activity of limb muscles. Age guidelines for head righting, equilibrium responses and other postural reactions which are dependent, at least in part, on vestibular processing have been documented by many developmental researchers, and are well known to therapists who work in paediatrics.

Another clinical observation relates to the presence of tonic neck postures. Problems in integration of tonic neck reflexes may implicate related vestibular dysfunction because labyrinthine receptors indicate body position only in conjunction with neck receptors. Muscle tone is another important aspect within the evaluation, as it is closely associated with the integrity of the vestibular system. Loss of vestibular input may result in prolonged muscular debility that may even extend to the visceral muscles.

Infants with vestibular, equilibrium and delayed maturational motor control disorders can now be identified at an earlier age, thanks to the success of newborn hearing screening. Unlike older children or adults with acquired unilateral vestibular deficits, these infants with BVD will not benefit from traditional vestibular rehabilitation strategies. They will benefit however, from ongoing sensory integration, substitution, conditioning therapy with trained paediatric physical and occupational therapists. The knowledge of the status of vestibular modality will provide the therapists with valuable information about therapy protocols and ultimately the child’s prognosis over time. Although it does require at least two intact sensory modalities to produce normal equilibrium function, this early therapy jump-start will be critical in providing patients with a more normal and active lifestyle during their formative years. 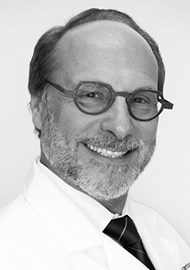