Recent changes in vestibular science and assessment
By Sally Rosengren

Clinical assessment of the dizzy or imbalanced patient is all about the patient’s history. History, history, history. But what about puzzling cases when we feel we need more information? Sally Rosengren gives us a rundown of the vestibular tests which are now in widespread use, and helpfully demystifies them.

There has been rapid change in vestibular assessment in the last 10 years, largely due to advances in technology and accompanying improvements in our knowledge of vestibular function. The mainstay of laboratory tests of the vestibular system has long been the caloric test, supplemented by other tests such as rotation and subjective visual vertical (SVV) at specialist centres.

This has largely meant that information could only be generated about horizontal canal function; however, with the introduction of new tests, this situation has gradually changed. The cervical vestibular evoked myogenic potential (cVEMP), a sound-evoked reflex recorded from the neck muscles, was described in 1992, and became accepted as a clinical test of saccular function over the next 15 years. 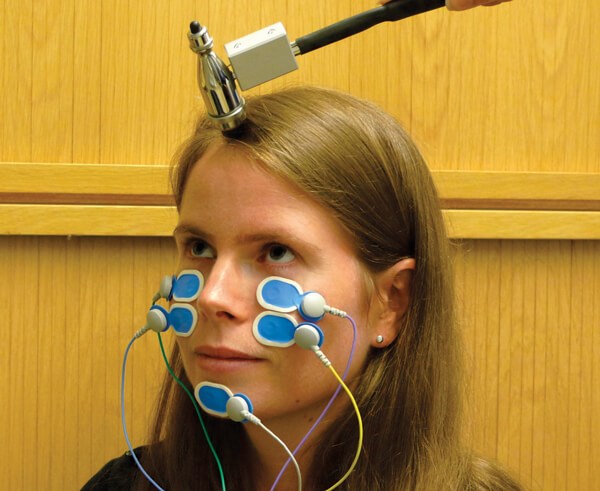 Figure 1a. The oVEMP is a muscle reflex recorded from electrodes placed on
the face near the eye. It is a utricular reflex of the extraocular muscles. 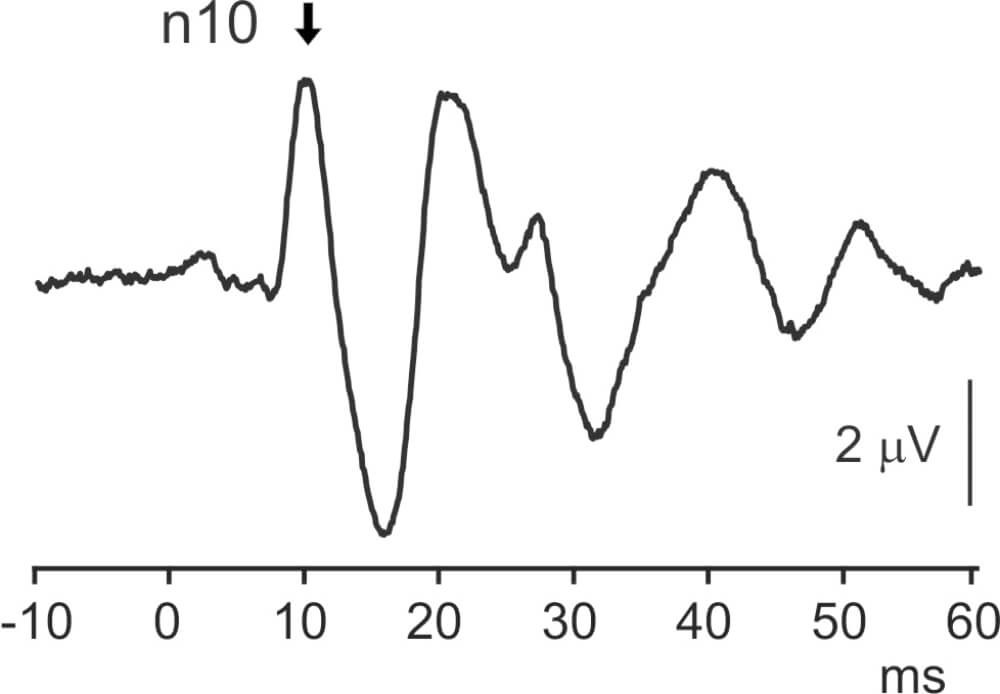 Figure 1b. The surface response consists of a series of waves, starting with a negative potential at 10 ms (n10).

The ocular VEMP, a similar reflex recorded from the extraocular muscles (see Figure 1a and 1b), was described in 2007 and now provides us with a new test of utricular function. Over a similar time period, changes in the size and speed of cameras and computers enabled the development of head-mounted video-oculography systems to measure the vestibulo-ocular reflex (VOR) during head impulses. As a result, since about 2012 several video head impulse test (vHIT) systems have become available (see Figure 2). Collectively, these new tests of vestibular function have changed the landscape of neuro-otology. 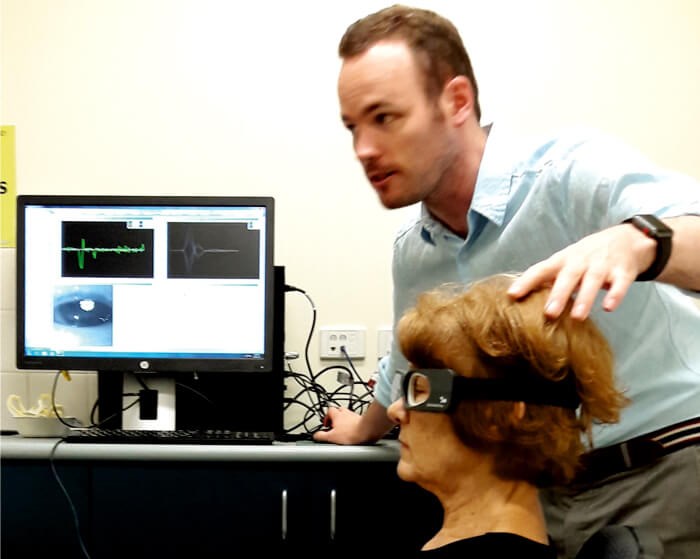 Figure 2. Video goggles from the Otometrics vHIT system. The vHIT is a test of semicircular canal function in which video goggles measure the vestibulo-ocular reflex during fast movements of the head (head impulses).

The vHIT provides similar, but complementary, information to the caloric test about horizontal semicircular canal function. However, the advantages of the vHIT are that it extends testing of canal function to all three canal pairs and is usually a faster (and therefore cheaper), portable and more benign test for patients [1]. In most cases, the results of both tests are concordant. In the small proportion of cases in which the test results are discordant, most often the caloric test is abnormal but the vHIT is normal, and in most of these cases the underlying cause is Meniere’s disease [2]. Adding the vHIT to the test battery has therefore given us new understanding of the widespread preservation of canal function in Meniere’s disease, and inspired debate about the possibility of the tests assessing low (caloric) versus high-frequency (vHIT) canal function.

Given the benefits of the vHIT, we are beginning to see altered patterns of referral, whereby the vHIT tends to be ordered as a screening test and the caloric test is ordered (a) when the vHIT is normal and a canal deficit is still suspected, (b) when Meniere’s disease is part of the differential diagnosis and (c) in complex cases or those requiring long-term tracking. However, the relative sensitivity and specificity of the two tests in different diseases have not yet been determined. Unlike the caloric test, the vHIT is suitable for use in acute or subacute vertigo and across multiple time points, and its rapid uptake internationally is enabling widespread scientific investigation of the short-latency vestibulo-ocular reflex across all canals.

Similarly, the introduction of the cVEMP and oVEMP has extended vestibular function testing to both otolith organs and increased our knowledge of otolith involvement in vestibular disease. However, unlike the vHIT, which provides an easier method of recording a well-known reflex, VEMPs introduced a novel means of stimulating the vestibular organs and recording otolith function. This has had a clear scientific impact, as VEMPs have inspired basic scientific research into the effects of sound and vibration on vestibular receptors and the otolith projections to muscles throughout the body [3].

We now understand that sound and vibration selectively activate the irregularly-firing otolith afferents, while semicircular canal afferents are only activated if there is a third mobile window in the labyrinth, as in superior canal dehiscence, or at quite low frequencies of stimulation (below about 100Hz). The discovery that we can record extraocular muscle activity with surface electrodes (i.e. oVEMPs) has opened up a new avenue for investigating vestibulo-ocular reflex projections non-invasively in humans [3].

The main clinical benefits of VEMPs are twofold: they provide a means of detecting (a) vestibular hyperfunction, i.e. in patients with superior canal dehiscence, and (b) loss of otolith function [4]. Due to the altered passage of sound through a dehiscent ear, sound-evoked reflexes are typically large and have a low threshold [5]. Of the two VEMP reflexes, the oVEMP is more sensitive and a single oVEMP trial at high intensity can be enough to show abnormal sound sensitivity, while the cVEMP is less sensitive and requires threshold measurement. VEMPs are now part of the proposed diagnostic criteria for superior canal dehiscence, alongside negative bone conduction thresholds on audiometry and elevated summating potential to action potential ratios on electrocochleography. These tests provide important evidence for a physiological effect of a hole seen on computed tomography images [5].

“Of the two VEMP reflexes, the oVEMP is more sensitive and a single oVEMP trial at high intensity can be enough to show abnormal sound sensitivity”

In terms of loss of otolith function, cVEMPs have previously been shown to detect saccular dysfunction in some patients with Meniere’s disease, vestibular schwannoma or vestibular neuritis, among other diseases, but are normal in most neuro-otology patients. They have increasing false positive (abnormal) rates with advancing patient age, in part due to decreased effectiveness of air-conducted sound as a vestibular stimulus as the ear ages. oVEMPs produced by sound are even more affected by age, but when evoked by bone-conduction, provide a robust measure of utricular function.

Recent research suggests that oVEMPs are abnormal in about 70% of patients with vestibular neuritis, while cVEMPs are abnormal in about 40%, reflecting the fact that vestibular neuritis nearly always affects the superior vestibular nerve (responsible for oVEMPs) and less often affects the whole nerve (including the inferior nerve responsible for cVEMPs) [4]. However, the rate of horizontal semicircular canal abnormalities in vestibular neuritis is even higher (98%), suggesting that the horizontal canal is more affected by neuritis than the utricle and/or the oVEMP is a less sensitive test. In other diseases, oVEMPs have similar rates of abnormality to the cVEMP, depending largely on the type and stage of disease.

Together the VEMP and vHIT now allow assessment of all five vestibular organs and provide new ways of examining vestibular function in health and disease. Given the benefits of the vHIT in particular, and its recent widespread uptake, we expect to see many studies in the near future comparing function across the three semicircular canals in a variety of conditions and across multiple timepoints.

Declaration of Competing Interests: Dr Rosengren is supported by the National Health and Medical Research Council of Australia. 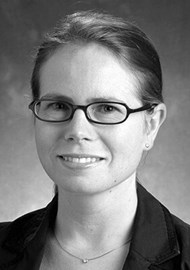