Hearing aids have a relatively long history as tinnitus treatment tools. Saltzman and Ersner reported success in suppressing tinnitus with simple hearing aids in a number of cases as early as 1947 [1]. In an early comprehensive approach to tinnitus management the American otologist EP Fowler wrote:

“Nothing is more effective in curing tinnitus than diminishing deafness and nothing so harmful as increasing deafness.” [2]

Although there has been an understandable drive to develop effective pharmaceutical and non-invasive brain stimulation techniques for tinnitus management, they have yet to meet with great clinical success. Likewise many new sound based therapies for tinnitus have recently been introduced. When it comes to tinnitus, hearing aids can be thought of as ‘the elephant in the room’; the most obvious solution to a tinnitus sufferer’s complaints often appears to be overlooked in favour of new, innovative, but unproven treatments. A recent review of hearing aids for tinnitus management showed that while there was an absence of strong randomised controlled trials, the quantity of research was firmly in favour of hearing aid effectiveness [3]. There are many potential modes of action for hearing aids in tinnitus. Hearing aids may act to reduce tinnitus by improving hearing and consequently quality of life, by reducing attention to hearing, through raising audibility of ambient sound to interfere with tinnitus, by masking and / or disrupting auditory processing of tinnitus, and by gaining adaptation and neural plasticity [3].

In the past little attention has been paid to how hearing aids should be selected and fitted to manage tinnitus. Most studies appear to fit hearing aids along conventional lines with little consideration for the nature of the tinnitus or how hearing aids might be interfering with tinnitus.

In 2006, based on clinical experience and largely anecdotal evidence, I provided some recommendations for hearing aid fitting in tinnitus management [4]. The principle was to provide as much gain of low intensity ambient sound as possible without louder sounds causing discomfort. In selection of hearing aids the ideal devices are those that allow the dual, but potentially antagonistic goals of improving the audibility of speech and amplifying ambient sound to interfere with tinnitus. I recommend:

In the last eight years experimental evidence to support some of these suggestions has been published (for a review see Shekawat et al. [3]). One of the most informative pieces of research into the clinical effectiveness of hearing aids investigated the relationship between tinnitus masking, the audiogram and hearing aid bandwidth. McNeil et al. [5] found that patients who had hearing aids that completely masked their tinnitus showed a much greater reduction in tinnitus reaction than those who had partial masking, while those who reported that hearing aids did not have any effect on tinnitus audibility showed no improvement (even though their hearing was improved). This result suggested that masking might be more important than psychosocial benefit provided by assisting hearing. The ability to achieve the masking was related to the degree of hearing loss. Those hearing aid users who achieved masking had better low frequency hearing. Those participants with even a mild low frequency hearing loss were less likely to achieve masking with hearing aids.

Tinnitus pitch relative to hearing aid bandwidth was also important, if the tinnitus pitch was higher than the high frequency range of the aids used a reduction in tinnitus was less likely. Based on this emerging evidence I now recommend that hearing aids should be considered when tinnitus pitch is less than 8 kHz (within the amplification range of most aids) and the person has normal hearing to mild hearing loss in the low frequencies. Outside of this range I now recommend combination hearing aid and sound generators (sometimes called tinnitus instruments or ‘combi’ devices), and for severe to profound hearing loss – cochlear implants (Figure 1). Back in 2006 I was cautious in recommending the use of combination devices, largely because of the limited technology available at the time. Since then most major manufacturers have introduced combination devices, not only with new sound generators (e.g. shaped noise, environmental steering, fractal sounds), but also importantly with the latest in hearing aid signal processing. 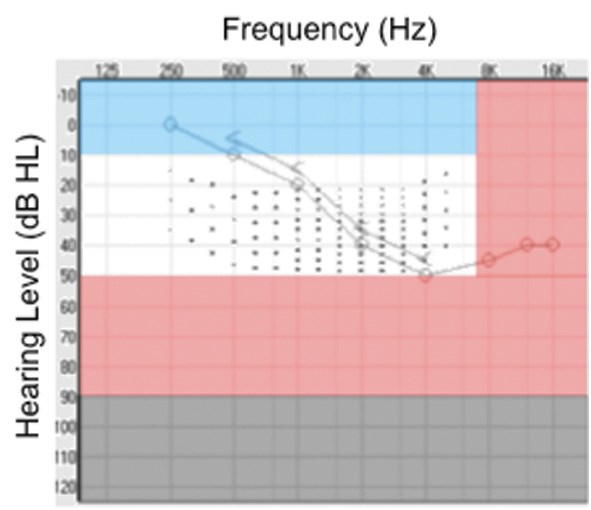 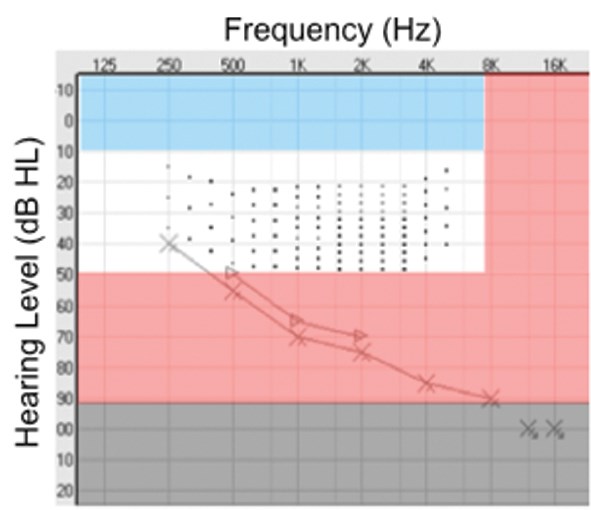 Figure 1: A rough guide to selecting the type of device for tinnitus sound therapy based on the audiogram. The area in which the audiogram falls suggests the device type. Blue: Recommend sound generators. White: Hearing aids. Red: Combination device. Grey: Cochlear implant. A) An audiogram for a person with whom I would initially trial a hearing aid. B) An audiogram indicating greater hearing loss – I would initially trial a combination device. The dots represent the Audibility Index (1 dot = 1%).

I recommended fitting to the desired sensation level input / output (DSLI/O) prescriptive procedure because it provides fitting targets that are higher for low intensity inputs to high frequencies than many other fitting formulae (i.e. suggests more amplification of soft sounds). There is some empirical evidence to suggest that DSL is indeed a good starting point for prescription of tinnitus hearing aid output [6]. Real-ear verification of output is also important in fitting aids for tinnitus, as it is the only reliable method for seeing if quiet sounds exceed threshold and hence should be audible for the client. If real-ear measures aren’t undertaken, the range of sounds audible as a function of frequency cannot be related to the individual’s tinnitus, making fine-tuning to provide greater interference ‘pot-luck’.

A last but very important point is that as clinicians we should not be slaves to the technology, but rather need to consider the individual in front of us and their psychological needs. Tinnitus is not just about the detection of a sound; its severity is also influenced by context, emotion and the individual’s personality [7]. Fitting of hearing aids can be beneficial, but counselling has to be at the core of any current tinnitus treatment approach. In the future augmentation or ‘priming’ of hearing aid effects through modulation of auditory plasticity (via neuromodulators) might be possible. We still have much to discover in order to make the most effective use of hearing aids and combination devices. To do that we must harness objective measures of neural function and use hearing aids as probes of auditory function.

As the title of this article suggests, there are no precise guidelines for the fitting of hearing aids for tinnitus yet. I have suggested a rough guide; it may prove useful in your clinical practice. The basic premise is to do your best to improve your patients’ hearing and stimulate the auditory system with low level sounds, beyond that we are still discovering, however I strongly believe that Fowler was correct. 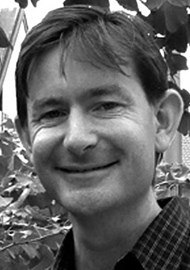