Today catering is a hugely popular career choice for many people and there’s a new cookery competition or programme on our TV screens every week. But beyond the media glamour, the kitchen is a challenging and noisy working environment, in particular for anyone with hearing loss and for those teaching them. Here, world-renowned TV chef and presenter Alan Coxon describes both the challenges and the rewards of teaching a deaf trainee chef in his kitchen.

It is an absolute pleasure to be invited to scribe a few words for this issue and an opportunity to relive and share what I hope may be a relevant experience to hearing professionals and those with hearing loss in the catering and hospitality industry.

As a chef (for more years than I really wish to disclose) working in Michelin starred restaurants and leading hotels in locations such as Monte Carlo and Paris, there came a point in my life where the family required something often described as a “father to be present”! Having habitually worked 14 hour shifts, my new role cried out for a redirection of energy and responsibility.

Opening a 4-star hotel in Paris leading a brigade of 68 international chefs with a million-pound food and beverage turnover per month, would often mean not going home for three weeks at a time. Needless to say, I decided to withdraw marginally from the front line and focus on the development of not only my family, but that of the next generation of chefs. I opted to take a role with better hours and a new position as a catering college lecturer. 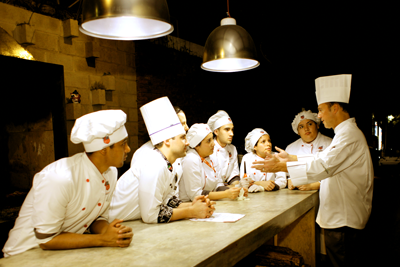 Alan Coxon with some of his students.

Alas, little had prepared me for what I was about to meet as I headed into the arena of further education. Not only did I personally need development and communication skills above and beyond that of culinary terminology, but I also had to learn how to transmit vital information and skills, deliver discipline and motivation that wasn’t akin to that of Gordon Ramsay!

To add to my challenges, I was instantly promoted to group tutor, apparently an honour and where extra responsibilities lay in looking after the welfare of my new-found family. To add to the initial shock horror factor, one of the biggest challenges and something I had never encountered before was that one of my students was completely deaf.

The initial cries of “a deaf chef” were attached to the serious consideration of how that could ever possibly work given issues of health and safety, timing, organisation, service, orders, the list goes on and on, for the kitchen and its success lies totally on verbal communication. In addition the cacophony of pots, pans, crockery, machines, extractors and a hundred other noises all compete to drown out voices in the kitchen.

An interpreter assisted with both practical and theory classes, and this meant I had another sharp and fast lesson to learn, for my interpreter needed class notes. In addition, I had to be concise with my delivery and consider the words and phrases I used, the speed of delivery, as well as timing to allow integration when asking questions and engaging the rest of the class. I also had to be aware of physical positioning, verbal cues, body language etc. As the tutor, I had to spend at least an extra hour after every session on a one-to-one basis in order to explain and re-explain everything covered in class to ensure that nothing was missed or communicated insufficiently.

Of course, it had its moments and many frustrations, but the courage and determination of my deaf student and his desire to learn and enter the culinary profession was nothing short of admirable and inspirational.

“The courage and determination of my deaf student and his desire to learn and enter the culinary profession was nothing short of admirable and inspirational.”

My student’s interest was such that despite all odds he requested a work placement, not in the safety or comfort zone of his home town or local restaurant but in a top London hotel. With a make or break approach I organised for him to spend six weeks with my friend and top chef Anton Edelman at the London Savoy hotel. After six weeks of working in one of London‘s leading 5 star establishments he came home with glowing references.

In his second year I placed him with renowned chef Anton Mossiman. This time he returned claiming to actually be more skilled than the master himself! He felt that as he produced Mossiman’s preparation, this made him the master, as Anton Mossiman merely put the ingredients together. Much discussion and debate took place in order to explain the process and procedures, however it was difficult explaining how cooking is much more than process and procedure. My limited (but growing) sign language and the two years as his teacher and tutor would see me hand signing, “Cooking is about love”, as I thumped my chest and signed an ‘L’. I am not certain he fully understood my meaning as he always replied with a negative shake of the head.

I struggled for the first time in my career as a chef and a teacher to explain why it is perfectly acceptable that a recipe could be printed inaccurately in a book, or why a dish might taste completely different each time it is made, even when the same recipe and method were being used, but by a different person. It made me aware of the communication difficulties between someone with hearing loss and someone without.

The young man’s courage and enthusiasm for cooking drove him to the successful completion of the two year catering course, putting many (if not most) of the hearing students to shame. At his request I obtained a commis chef position for him with none other than three Michelin starred chef Marco Pierre White, famed for his vocal and verbal delivery and being Gordon Ramsay’s mentor. To everyone’s surprise, my prize student survived a record three years in his kitchen, obviously oblivious to all the abuse that would echo around the kitchens; I guess being deaf had a distinct benefit then!

On a trip to London I met up with him and he proudly showed me his plates and dishes and what he had learned from Marco, however the most touching moment of all was his big smile as he tapped his chest and told me, now he knows what I mean, “cooking is all about the love!”

With a lump in my throat, I knew my work was done. A hearing loss or deafness should not prevent someone from entering the kitchen and reaching the top. It just takes consideration, creativity and attention, all good tenets of any decent chef … or tutor! 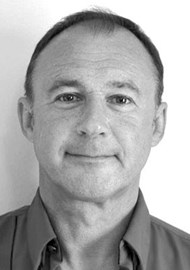