Physiological changes during the menstrual cycle are well documented; do these changes extend to the auditory system? Lalsa Shilpa Perepa and Rewa Indurkar delve into the literature to find the evidence.

Menstrual cycle refers to a series of changes that occur in a sexually mature female and is marked by the first menstruation during the pubertal age. This series of changes is due to various hormones that play an important role in regulating the menstrual cycle. The hormonal changes that occur in a short time span promote modifications all over the woman’s body, with physical and emotional manifestations, which are frequently observed.

These hormonal changes have been implicated as a causative factor for many psychological and physical symptoms [1]. As well as these symptoms, changes in the physiology of the body also occur, such as: regulation of metabolism, changes in voice parameters, skin; basal metabolic temperature, body weight and ventilation; fluctuations in sweating response; variation in blood flow to the skin; changes in heartrate; and other changes, including the impact on audition.

1. Changes in hearing thresholds at each frequency pre, during and post menstrual cycle for the right ear. 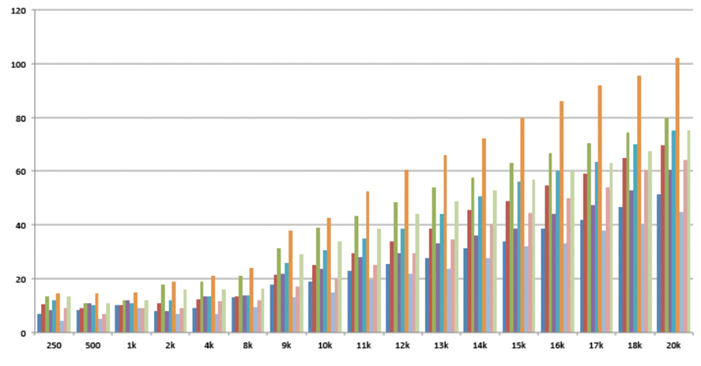 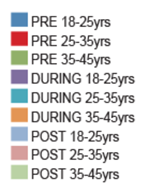 2. Changes in hearing thresholds at each frequency pre, during and post menstrual cycle for the left ear. 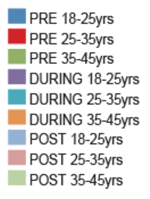 Hormonal changes are one of the contributing factors that have an effect on audition. Changes in oestrogen and progesterone - the female hormones - influence the auditory function in the pre, mid and postmenstrual period [2]. Walpurger et al, investigated event-related potentials (ERPs) to neutral stimuli over the course of the menstrual cycle and concluded that auditory ERPs change across the menstrual cycle, with the most prominent changes occurring during the luteal phase [3]. Yadav, Tondon and Vaney supported these findings by concluding that normal cyclical variations in the levels of oestrogen and progesterone during menstrual cycle do affect the auditory pathways, and effects are better seen on the central component [4]. Brainstem auditory neural pathways are sensitive to fluctuations in oestrogen levels during the menstrual cycle [5]. As well as variations in the auditory pathway, effects of hormones are also observed in middle ear physiology.

”Brainstem auditory neural pathways are sensitive to fluctuations in oestrogen levels during the menstrual cycle.”

A study by Cox on middle ear functioning revealed changes during the menstrual cycle, thereby concluding that the natural increase in interstitial fluids, which generally begins four or five days before menses and culminates shortly after the onset of menses, may be of sufficient magnitude to alter eustachian tube function and thereby affect middle ear status [6]. According to Cinta et al, hormones are known to influence the labyrinthine fluid homeostasis, causing balance and hearing dysfunctions [7]. Haggerty, Lusted and Morton, claimed that outer hair cells are sensitive to metabolic and hormonal changes, with the changes observed in spontaneous otoacoustic emissions [8]. Some studies, however, have shown that no systematic pattern was observed for transient evoked otoacoustic emissions (TEOAES) [9,10].

It is likely that peripheral hearing sensitivity may also show fluctuations. Due to limited availability of literature in this aspect, and since the majority of the studies carried out were largely focused on auditory potentials and central auditory pathway, the knowledge about peripheral auditory function is far from complete. Not much information is available on the nature of endocrinal changes specific to hearing sensitivity during the menstrual cycle. Hence, a cross-sectional study was designed to analyse the effects of menstruation on hearing threshold in adult female participants.

Thirty adult females in the age range of 18-45 years took part in the study. They were further divided into three age groups, with inclusion / exclusion criteria. Pure tone audiometry tested between 250Hz and -8kHz and high frequency audiometry tested between 9kHz and20kHz was performed. The data obtained was subjected to statistical analysis; it was then entered into an SPSS spreadsheet. The results from descriptive analyses showed that the mean scores of subtests show a gradual increase in the threshold during the menstrual period from 9kHz onwards in the age group of 18-45 years and the thresholds were better post-menses than pre or during.

In all age groups, the thresholds in the pre and during conditions was almost the same but were higher than post-menses from 2kHz to 8kHz. From 9khz onwards the thresholds increased during the menstrual period and returned to normal levels post-menses. The thresholds were poorer in all age groups in the frequency range of 8kHz to 20kHz prior to the menstrual period and were worse during. These results were in consonance with studies conducted by various authors.

Peitiot and Parrot [11] and Cox [6] concluded that thresholds were poorest during menstrual phase and best post-menstruation. They attributed this change to oestrogen and progesterone as these were at the lowest levels during the menstrual phase. Desai and Bhinde also found that the thresholds were elevated during menstruation [9]. Another important finding of this study was that hearing thresholds increased as the age increased, and showed significant changes during the menstrual cycle. The fluctuation of hormones during the ovarian cycle may potentially lead to fluctuation in auditory function and other sensory processes [12]. The auditory system may be more sensitive during the peak of oestrogen circulation due to its excitatory and protective effect in the central nervous system (CNS).

Correspondingly, the low levels of hormones during the pre-menstrual phase may relate to less sensitive auditory function. A fluctuation in hormones affects higher areas of auditory processing and thus leads to changes in auditory thresholds, similar to the findings documented in other sensorimotor and cognitive functions [13]. The results of the present study contradict findings of studies done previously. Baker and Weiler [14], Davis and Ahroon [15], and Miller and Gould [16] studied pure tone thresholds for women with normal menstrual cycles during the first half of the menstrual cycle and the luteal phase.

“Hearing thresholds increased as the age increased, and showed significant changes during the menstrual cycle.” 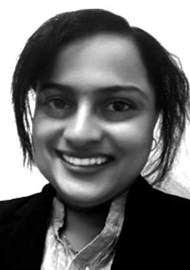 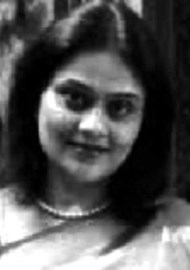