Winfried Schlee describes how a major European funding award is bringing together experts who are committed to collectively developing a better understanding of tinnitus. This work is vital if we are to pioneer effective treatments for the condition in its many varied forms.

Subjective tinnitus, the perception of a (phantom) sound in the absence of a physical source, is a frequent condition in Europe. Currently, over 70 million people in Europe and more than 50 million in the USA are reported to experience tinnitus. For more than 10% of those, it is a debilitating condition. For these suffering patients the significant impairment of quality of life induced by tinnitus is explained by its complex interactions with key functions like sleep, attention or psychological status. To date, there is no effective treatment available that reliably reduces the sensation of the tinnitus sound. The major barrier for the development of innovative and effective treatments against tinnitus is represented by the heterogeneity of the tinnitus phenomenon. It is expected that there are several different subtypes of tinnitus, which have to be treated in different ways. In order to effectively address the heterogeneity of tinnitus, a coordinated effort is required to enable the standard assessment of tinnitus characteristics and the joint analysis of a large database of tinnitus cases.

“Tinnitus is a heterogeneous phenomenon.”

The global aim of the TINNET COST Action is the creation of a pan-European network to identify pathophysiologically and clinically meaningful subtypes of tinnitus together with their neurobiological and genetic underpinnings. This will be facilitated by standards for clinical assessment and outcome measurement, by large-scale multi-centre data assessment and by data management in a quality controlled database. Furthermore, the clinical data will be complemented by neuroimaging and by the search for genetic markers. The data analysis concentrates on the identification of meaningful tinnitus subtypes with the goal to improve the scientific understanding of the tinnitus heterogeneity and develop new treatments for tinnitus.

Specific objectives of the TINNET COST Action are:

The TINNET Action is funded by the European COST framework (www.cost.eu), which specifically funds European networking activities in science and technology. The COST framework allows us to create a widespread network of tinnitus researchers and finances workgroup meetings, training schools on tinnitus, short-term scientific missions as well as dissemination activities of TINNET (Figure 1). It thereby offers a platform for knowledge exchange among researchers, clinicians and industrial partners from different European countries and various scientific disciplines. Special emphasis is placed on the integration and support of young researchers of both genders and also on involving experts from less connected research centres.

Figure 1: Overview of the networking tools in the TINNET Action, funded under the EU COST framework.

“The TINNET COST Action aims for a better scientific understanding of the tinnitus heterogeneity.”

Five Working Groups (WG) have been formed to concentrate on the different objectives of TINNET:

Clinical WG1. The goal of WG1 is the development of guidelines for the clinical and audiological assessment of chronic tinnitus patients as well as the implementation and dissemination of these guidelines.
Database WG2. WG2 aims for the implementation of a large and international web-based database of tinnitus cases. Standard operating paradigms for data handling and statistical analysis will be developed and disseminated.
Neuroimaging WG3. The aim of WG3 is the development of standard operating paradigms for data acquisition and data analysis in neuroimaging studies on tinnitus. Implementation of neuroimaging studies in the central database will allow for testing hypotheses on tinnitus subtypes based on neuroimaging data.
Genetics WG4. This group concentrates on unifying biobanking efforts for tinnitus across Europe. A joint strategy for data collection, data storage, data sharing and analysis with respect to tinnitus subtypes will be developed.
Outcome measurements WG5. This group is developing standards for the assessment of treatment outcome in clinical trials on chronic tinnitus and will establish standards for describing therapeutic interventions.

Facts about the TINNET COST Action

Figure 2: Map of the European countries participating in TINNET. 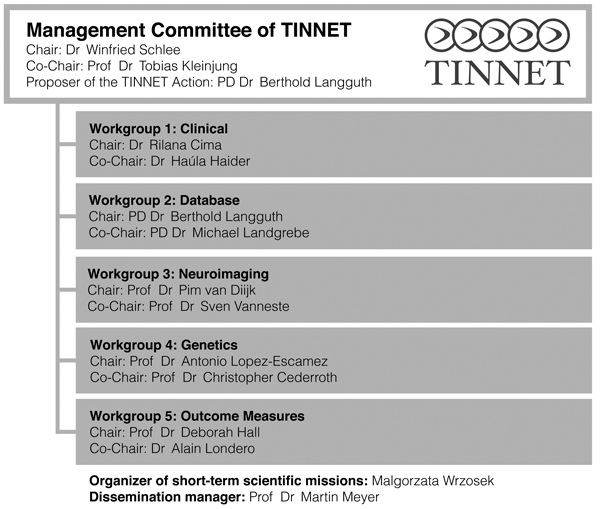 Understanding the heterogeneity of tinnitus is a challenging research goal that can only be achieved by the coordinated research effort of a large research community. A large number of scientists and clinicians are already participating actively in this effort. Active participation in TINNET includes a variety of activities such as performing or hosting a short-term scientific mission, sharing data in the tinnitus database, participating in the WG meetings or workshops, organising training schools, exchanging and discussing important tinnitus topics in the TINNET LinkedIn group, and many more. If you want to learn more about the TINNET COST Action or get in contact with us, please visit us on www.tinnet.tinnitusresearch.net.

Winfried studied psychology, statistics and philosophy at the Universities of Konstanz and Alabama at Birmingham. In 2013, he joined the Tinnitus Research Initiative where he investigates new methods for the treatment and measurement of chronic tinnitus. Since 2014 he has been the chair of TINNET. He will be a keynote speaker at the 1st EU COST Action (TINNET) conference speaking on ‘Towards a better understanding of tinnitus heterogeneity’. 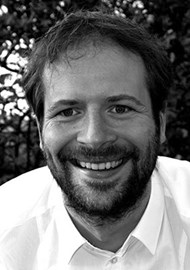