The role of prediction and gain in tinnitus
B William Sedley

Dr Will Sedley is a Clinical Academic Neurologist who has done groundbreaking work in the field of tinnitus mechanisms. Here, he introduces and explains the concepts of prediction and of gain as they relate to troublesome tinnitus.

This article focuses on the mechanisms by which tinnitus arises. It is hard to ignore the observation that over half of normal-hearing individuals hear a faint tinnitus-like sound when concentrating on their hearing in a silent sound-proofed environment.

Tinnitus can therefore be considered part of the normal state of being, with the aberration being when it is elevated to a loudness sufficient to be heard over quiet background sounds. Therefore, although pathology in the ear is its major risk factor, tinnitus itself must be fundamentally explained as a pathophysiology rather than a pathology. 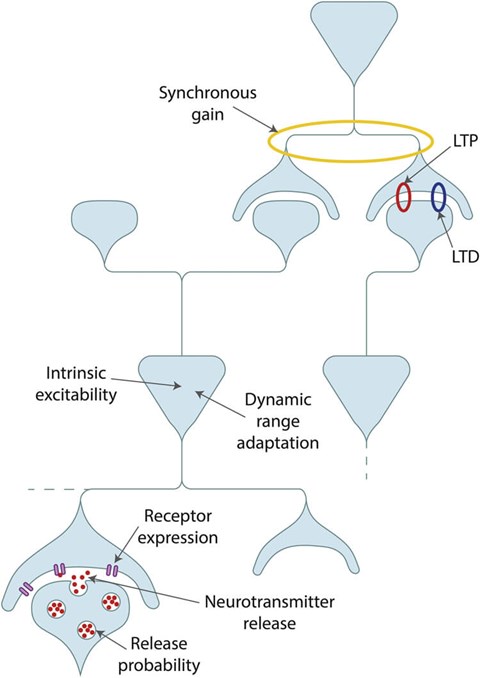 Figure 1. Mechanisms of gain. A small number of neurons are illustrated to show how gain can be influenced by properties of individual neurons, synapses between neurons, or synchronous activity between neurons. Image reproduced with permission from Sedley 2019 [1].

‘Gain’ refers to processes linking the strength of a system’s input to the strength of its output and can be intuited as a volume dial. Various factors influence gain (Figure 1) and certain principles of gain control are inherent to sensory pathways, including dynamic range adaptation, whereby neurons shift their response profiles to best represent the range of input strengths to which they have recently been exposed.

Broadly, homeostasis requires that neural systems maintain their mean activity level within a certain range. The intuitive concept then follows that reduced input to a system, such as hearing loss, results in increased gain in order to maintain their mean activity. We must remember here that there is spontaneous activity in all sensory pathways (for instance, most people in complete darkness will not see pitch black, but a variety of random simple colours and shapes), which probably explains the very faint tinnitus heard by many in completely silent environments. Gain acts on both spontaneous and sound-driven activity in the auditory pathway, and therefore the gain resulting from hearing loss leads to increased spontaneous activity (Figure 2). One example manifestation of this gain increase, as shown in the figure, is the ratio of auditory brainstem reflex Wave I to Wave V. This same gain applied to spontaneous activity might, therefore, push it over the threshold required for conscious perception over background sounds. 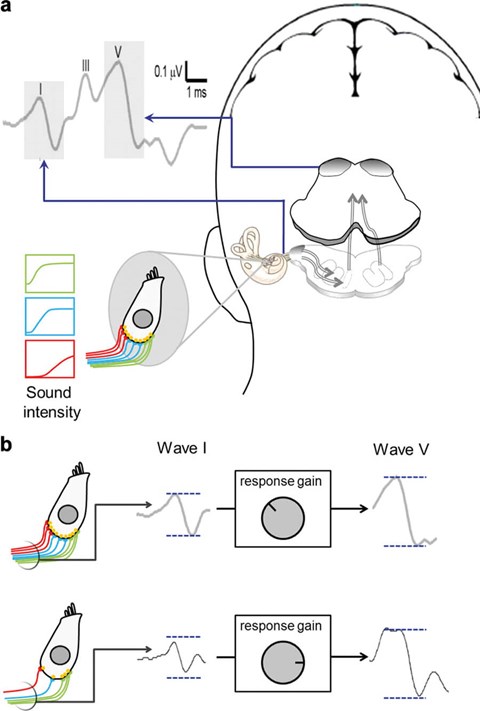 Figure 2. The auditory brainstem response (ABR) as an indicator of central gain. Waves I and V of the ABR localise to the auditory nerve and midbrain respectively (a). The ratio of these two indicates the amount of central gain taking place (b). Image reproduced with permission from Schaette and McAlpine [4].

Gain changes alone do not seem to explain tinnitus

It is very clear that hearing loss, the major risk factor for tinnitus, leads to marked increases in gain in the central auditory pathway, including increases in spontaneous and sound-driven neuronal firing rates and synchrony, and reductions in inhibitory neurotransmitters. However, attributing these changes to tinnitus specifically is much harder. As I reviewed [1], few human studies have tightly matched the hearing profiles of control volunteers, and even fewer animal studies have ensured that the tinnitus-inducing insult (usually noise overexposure) was equal in both tinnitus and control groups. Some gain-related changes do seem to specifically relate to tinnitus even once hearing loss is fully controlled for. However, the limited number of studies examining individual animals have not found any of these measures accurately reflecting tinnitus presence or absence at the individual level.

“I proposed that tinnitus occurs when spontaneous activity in the auditory pathway is afforded too much precision, and therefore begins to influence perception”

Taking a step back from these nuances, there is also the very clear observation that the severity of hearing loss (and therefore the extent of gain changes) has only a loose correlation with the presence or severity of tinnitus. In summary, gain changes are clearly dramatic following hearing loss, and seem a likely risk factor for tinnitus, but seem unlikely to fully explain whether or not tinnitus occurs. Additional mechanisms are therefore likely to be required to explain tinnitus.

Role of predictions in tinnitus

Perception is the process of inferring the causes of input to our sensory pathways, and there is strong evidence that our brains generate and maintain models (or predictions) of the sensory environment. Sensory input is used to update and refine these models, but it is the models themselves that are perceived. The brain has to determine how relevant, accurate and/or important each piece of incoming information is; i.e. its precision must be determined. Perception can therefore be considered a precision-weighted average of the prediction and incoming sensory information. Sensory input with low precision influences perception little, and is largely ignored, while precise input has a larger impact and is more likely to be perceived consciously.

In the case of tinnitus, underlying hearing loss leads to increased spontaneous neuronal activity. However, although the magnitude of this activity is high, its precision is low compared to most external sounds. This is because it is primarily driven by random neuronal firing, and therefore lacks a clear time-structure, does not correlate with any other input to any senses, and does not resemble any previously known sound deemed to be of importance. Two alternative mechanisms have been proposed for how this situation can lead to tinnitus: 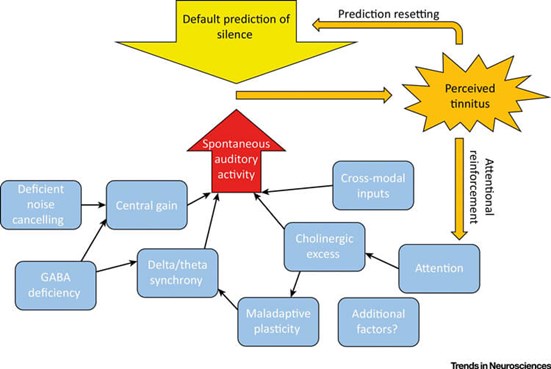 Figure 3. Emergence of tinnitus based on precision and prediction changes. The auditory pathway inherently has spontaneous activity (red arrow), which has low precision (arrow width) based on its random signal characteristics. In normal conditions this does little to overcome the default prediction of silence (yellow arrow). However, certain factors (blue boxes) increase its precision, leading to perception as a sound (orange). Once perceived, tinnitus is perpetuated by updating of default predictions and altered attention, which further increases precision. Image reproduced with permission from Sedley et al [5].

Most evidence for prediction-based accounts of tinnitus is circumstantial, but some direct evidence has recently emerged. Evidence of altered auditory predictions at the tinnitus frequency has been found, based on electrical brain responses evoked by stimulus changes [3]. Also, brain responses to complex sound sequences in people with tinnitus demonstrate greater ability to predict upcoming sounds based on the patterns inherent in the sequences than those without tinnitus.

Further work to assess alterations in prediction and precision is ongoing. Most importantly, if methods could be developed to directly influence sensory precision (for instance with specific types of sound therapy) or the tinnitus prediction itself then this may open the door to new types of treatment. 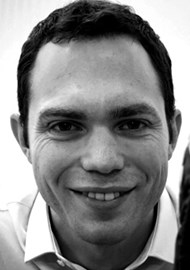