How do we explain unexplained dizziness in elderly patients? How far should we go with investigations? And most importantly, how should we manage this challenging and expanding group of patients whose balance affects their safety? Richard Ibitoye and Diego Kaski tell us about previous work on this topic, and potential for future research.

Dizziness is a common presenting complaint in ENT, audiology and neurology clinics and the burden increases with age. Often no diagnosis is reached and extensive neuro-otological investigations are normal. The problem remains ‘unexplained’, and often attributed to multiple factors.

Many of these patients show signs of excessive vascular brain ageing (cerebral small vessel disease), a process linked to an expanding range of later life problems; most notable, cognitive decline and gait disturbance. We discuss the evidence mechanistically linking cerebral small vessel disease and dizziness in the elderly, and implications for how we manage such patients.

One in 10 adults aged over 65 years experience significant and persistent dizziness. They describe vague dizziness and a sense of imbalance (dysequilibrium) when upright and walking, often worse when rising quickly [1]. Symptoms are largely absent when seated or supine. Vestibular investigations are normal, and their gait shows no definite neurological abnormality, although they report subjective unsteadiness that improves with even minimal support. Over many years, some develop a slow gait with short steps, characteristic of ‘lower limb parkinsonism’, a recognised feature of a severe burden of cerebral small vessel disease.

Any patient reporting dizziness on rising, particularly in the transition from sitting to standing should be investigated for postural hypotension by checking the blood pressure after a few minutes of rest in the supine position, then immediately on standing and three minutes later. A drop of 20mmHg or more in systolic, or 10mmg in diastolic pressure raises the possibility of postural hypotension which can be investigated further.

Peripheral vestibular, and somatosensory function decline in later life, and were once thought to be responsible for dizziness in the elderly. Later work, however, showed this does not explain dizziness in many patients. Kerber and colleagues studied patients with unexplained dizziness, carefully ruling out vestibular failure or neuropathy. After five years, the patients were no different from controls in peripheral sensory function. They did, however, show more decline than controls in their gait and balance, motor speed and general cognition. One major difference between patients and controls was an excess of white matter hyperintensities on brain MRI, a marker of cerebral small vessel disease (cSVD) linked to gait, balance and cognitive decline [2].

cSVD is common in adults over 60 years and associated with diabetes and hypertension. In the brain, there is hardening of small blood vessels with reduced blood flow, particularly affecting white matter. This is seen on specific (T2-weighted) brain MRI sequences as white matter hyperintensity (WMH). cSVD is known to contribute to gait, balance and cognitive decline as well as increasing the risk of lacunar stroke [2].

Other studies have shown a link between unexplained dizziness and cSVD [1,3], but it remains unclear how this aspect of ageing causes dizziness, whether other types of problems in the ageing brain contribute, and why some patients with a lot of vascular brain ageing are not particularly dizzy, yet others with little are very dizzy [4].

Small vessel disease reduces the effectiveness of connections between regions of the brain. This accounts for slowing of gait, and impaired cognition in advanced cases [2]. Standing (postural control) and walking involve the interaction of multiple brain areas, such as those involved in processing information from the feet, eyes, and vestibular organs, and those involved in executing movements of the legs, trunk and arms. 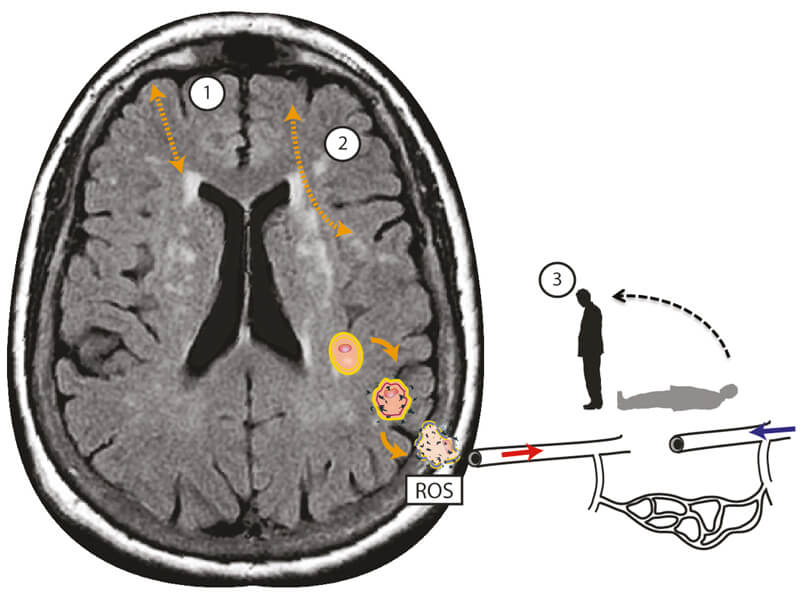 This sort of distributed function is at risk of disruption by cSVD which affects multiple connections in many areas at once. Loss of connectivity by age-related build-up of cSVD could lead to dizzy feelings through one or more of the following mechanisms (see Figure 1): disconnection of cortical vestibular centres, disconnection between frontal gait centres and the basal ganglia, and disconnection between intended motor action (efference copy) and ascending sensory inputs (sensory re-afference). In addition, we propose that cSVD-mediated dysregulation of cerebral blood pressure is linked to dizziness during standing and walking, explaining why measurement of postural blood pressure in the arms is usually normal in these patients [4].

Currently, in the absence of a clear cause for dizziness, treatment focuses on helping patients manage their symptoms and physiotherapy to improve balance more generally. The link to cerebral small vessel disease suggests it may be helpful to request brain MRIs in these patients in search of evidence of excess white matter hyperintensities or other markers of small vessel disease for age. If present, vascular risk factors such as smoking, hypertension and diabetes should be explored and optimally addressed. Optimal blood pressure in cSVD is an ongoing area of research (PROHIBIT-ICH), and trials are ongoing into new drugs to better target small vessel disease (LACI‑2). With Professor Bronstein at Imperial College London, we have been conducting a prospective study exploring the link between cSVD and unexplained dizziness in the elderly, and our findings will soon become available. 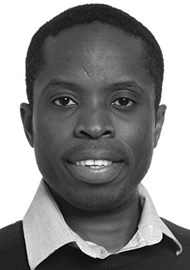 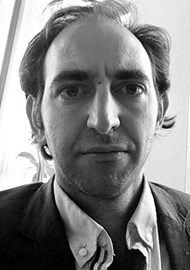