What’s new in the cochlea?
By David Furness

Prof Furness in this article rounds up the steps and leaps being made by the scientific community to develop therapies to support, rejuvenate and / or replace the cochlear structures. David’s electron microscope images of the cochlear structures are world renowned, reproduced in everything from first-class textbooks to Facebook and we are very pleased to have the opportunity to see them in ENT and Audiology News!

Research in the cochlea has become increasingly focussed on how to ‘fix it’ whether the hearing loss is caused by noise, ototoxic drugs, genetics or simply ageing. Not surprising, you may say, given the fact that the population profile is shifting to become increasingly ‘aged’ as more people survive for longer and are exposed to more environmental noise and other potentially damaging factors.

Hearing loss is a growing problem in terms of the number of people who might be expected to suffer from it. Alongside that there is continuing development of regenerative medicine and gene therapy in many different tissues and organs of the body. This holds out a lot of promise for future ways of fixing our hearing.

For example, a recent study by Yu et al. [1] has shown that viral-mediated transfection of the GJB2 gene that codes for connexin 26, a mutation that is one of the most significant causes of genetic hearing loss, is able to prevent the degeneration of the cochlea that occurs with this mutation in a transgenically modified knock out mouse. The mouse cochlea is structured much like a human’s cochlea and so is a good model (Figure 1). Although this treatment does not restore hearing to this knock out mouse, so there is some way to go, this is surely a great step forward for the development of gene therapies for hearing loss. 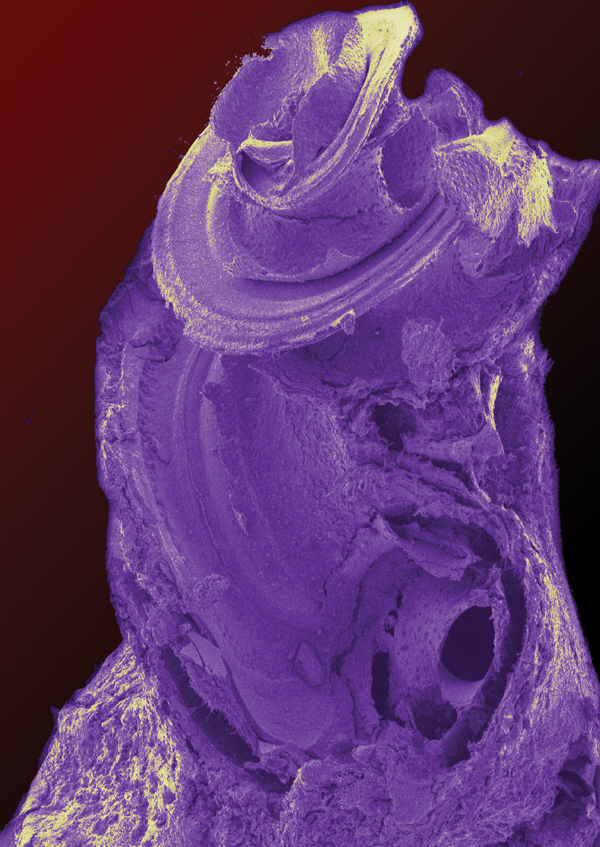 Figure 1. False coloured SEM of a mouse cochlea. The cochlea is about 2mm tall.

Another group has attempted to repair the hair cells in the deaf whirler mouse, which shows deafness and circling behaviour as a result of stereocilia defects [2]. Normal guinea pig stereocilia are shown in Figure 2. The Whirler mouse is a model of a human congenital deafness condition. The group, based at NIDCD in Bethesda, USA, has found that viral mediated gene transfection in the very young deaf whirler mice can restore the stereocilia to their normal shape and also decrease hair cell loss in these animals. 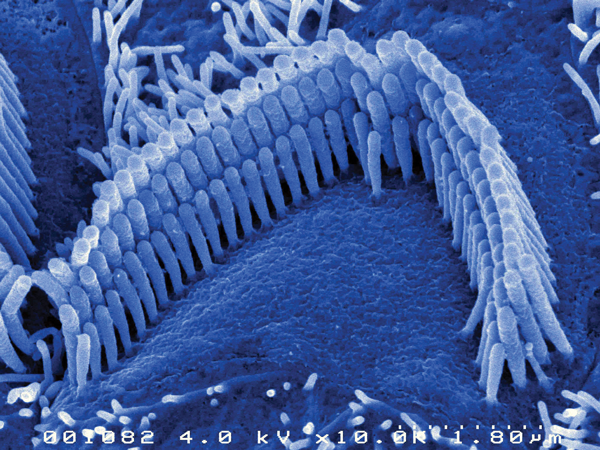 Figure 2. The hair bundle of a normal guinea pig hair cell showing
the rows of stereocilia magnified about 10000X.

“The promises of gene therapy and stem cell biology are beginning to be achieved in treating conditions of hearing loss.”

The number of these studies is growing rapidly: at the recent (February 2016) Midwinter Meeting of the Association for Research in Otolaryngology, San Diego, USA, several other applications of viral-mediated gene therapy were reported, including possible fixes for Usher Syndrome (Petit’s group in France) and the common hearing loss mutation in transmembrane-like channel 1, the putative hair-cell transduction channel (Holt’s group in the USA).

Another recent study seems to have ‘notched up’ another first by achieving something that many thought would not be possible: the regeneration of hair cells in the cochlea of a living animal [3]. The lab of Albert Edge at Harvard Medical School were able to show in 2013 using noise-exposed guinea pigs that new hair cells formed if they injected an inhibitor that blocks the Notch signalling pathway. This pathway is involved in hair-cell development and controls the fate of hair cells and supporting cells. Inhibition of the pathway caused an increased expression of a transcription factor called Atoh-1 which led to the conversion of supporting cells in the organ of Corti to hair cells. The authors also showed partial recovery of hearing. Guinea pig hair cells are shown in Figure 3 in a normal and a drug damaged animal. The latter has also been used as a model in other studies of regeneration. 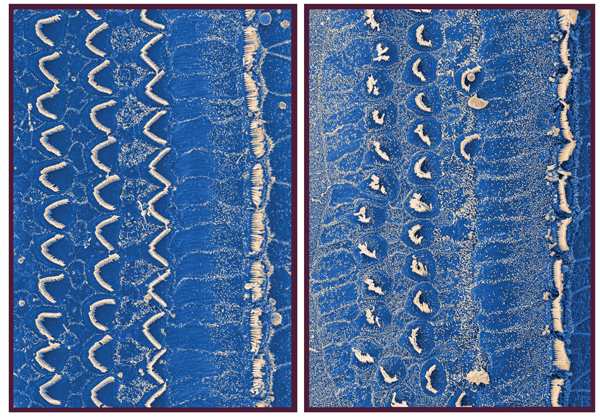 The research group in Sheffield, led by Marcelo Rivolta [4] has also been able to make significant progress using cellular transplantation therapy. In this case, the target was the spiral ganglion, the region of neurones that make up part of the auditory nerve. Auditory neuropathy is a condition that affects these spiral ganglion neurones. The group in Sheffield generated neural progenitor cells from human embryonic stem cells and were able to inject them into the modiolus in an animal model of auditory neuropathy, partially restoring both ganglion cells and hearing.

“New possibilities are on the horizon. In our own lab we have been developing potentially transplantable constructs that contain cells of the spiral ligament, in the lateral wall.”

New possibilities are on the horizon. In our own lab we have been developing potentially transplantable constructs that contain cells of the spiral ligament, in the lateral wall. The cells, called fibrocytes, assist in the development of the endocochlear potential and provide support, via homeostatic mechanisms, to the stria vascularis, hair cells and neurones. They are amongst the cells that express connexin 26. Our studies focus on replacing these cells because one of the main pathologies that can be observed in temporal bone studies is degeneration of the lateral wall. Perhaps this methodology may be able to arrest some forms of age-related hearing loss.

I hope these few words show, then, that the promises of gene therapy and stem cell biology are beginning to be achieved in treating conditions of hearing loss. Perhaps we can all hope for a future in which cochlear repair really is feasible without artificial aids. 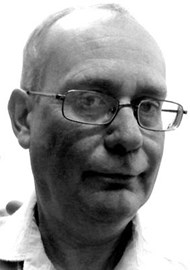