Good reasons to care about cognitive impairment and dementia in audiology

If asking people what they fear most when getting to old age, it is cognitive decline that is named most often. This comes with the expectation of limitations in one’s ability to remember, to judge, to make decisions, to take care of oneself and consequently with the fear of losing autonomy and integrity as a person.

Besides the personal tragedy of individuals and their families, the topic of cognitive impairment and dementia is a pressing issue to us as a society. With more and more people getting even older and dementia being a condition caused by age, our societies and health systems are confronted with a tremendous and increasing number of people who require special care.

According to the World Health Organisation (WHO), the number of people living with dementia in 2011 was estimated to be 35.6 million, and epidemiological studies indicate that this number is growing at an alarming rate. It is projected that the number will nearly double every 20 years, to 65.7 million in 2030 and 115.4 million in 2050 [1]. Also, dementia is the leading cause of institutionalisation in old age. An estimated 43% of prevalent cases need high levels of care, equivalent to that of a nursing home [2]. These numbers give an idea of the pandemic character of this disease.

As hearing impairment is often age-related, a large number of clients in audiology are older. Although they may present to a hearing healthcare professional (HHCP) with a defined problem regarding their hearing and speech understanding, hearing care is always about relating to and earning the trust of clients. This implies that the professional knows about their hopes and worries. Thus, profound knowledge about the challenges of ageing is an essential part of the work of HHCP and a precondition for meeting the needs and providing appropriate solutions, rehabilitation, and services to the growing number of older people who are hard of hearing. Most people will function normally as they age; however, a subset of individuals will develop cognitive impairment or dementia. Moreover, prevalence of hearing impairment (~50% of those over 65 years of age; ~75% of those older than 85 years [3, 4]) and the prevalence of dementia increase with age (~10% over 65 years of age; ~30% of those older than 85 years [5, 6]). Consequently, more and more older people are affected by both conditions. This may exacerbate the adverse consequences for functioning in everyday life, communication, social participation and quality of life of a person. Also, older adults with cognitive impairment may not receive adequate hearing healthcare [7]

“If asking people what they fear most when getting to old age, it is cognitive decline.”

Cognitive impairment and dementia – an overview

Even in normal ageing, assuming a brain that has not degenerated, there is good evidence that cognitive declines can be observed in a broad range of cognitive tasks [11]. Typically, these include declines such as reduced speed of information processing or difficulties in task switching or inhibition of interfering information. Overall, cognitive impairment goes beyond the declines that are expected in ageing. The diagnostic concept of mild cognitive impairment (MCI) describes an intermediary stage of impairment. Individuals with MCI syndrome are not demented, but they are considered to be at high risk for developing dementia of the Alzheimer’s type due to the accumulation of disease pathology in the brain. The umbrella term dementia refers to a group of brain disorders, all of which involve cognitive impairment but they vary widely in terms of cause, course, and prognosis. Still, all types of dementia are considered progressive and degenerative brain diseases that are typically fatal within years. Figure 1 shows model trajectories of cognitive decline in normal ageing, MCI, and dementia for comparison. 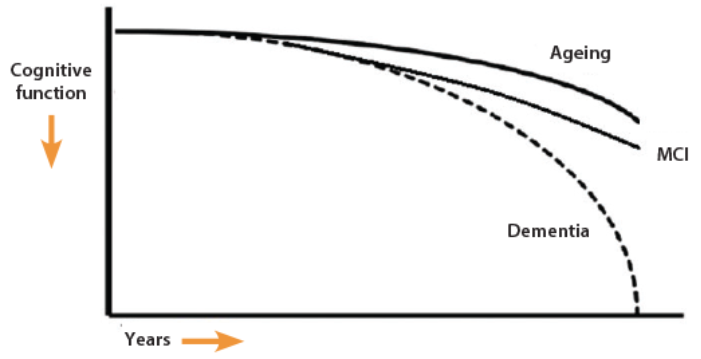 Alzheimer’s disease (AD) is the most common form of dementia (50% to 80% of all diagnoses [1]). In addition, vascular dementia, dementia with Lewy bodies and mixed conditions of the two with AD are common. Other types of dementia include fronto-temporal lobe dementia (FTLD), and dementia associated with medical conditions (e.g. Parkinson’s disease, Creutzfeldt-Jakob disease, normal pressure hydrocephalus, Huntington’s disease, Wernicke-Korsakoff syndrome and others). Dementia is more than memory impairment; it involves impairment of several higher order cognitive functions such as memory, planning, reasoning or language. Most importantly it is accompanied by gradual deficits in the ability to perform everyday tasks. This is what differentiates clinical dementia from prodromal stages such as MCI. In general, the cognitive decline in dementia is considered to be permanent and irreversible. Therefore, early diagnosis is crucial for identifying and treating any reversible causes, exacerbating factors, and associated psychiatric problems.

“Prevalence of hearing impairment and prevalence of dementia increase with age. Consequently, more and more older people are affected by both conditions.” 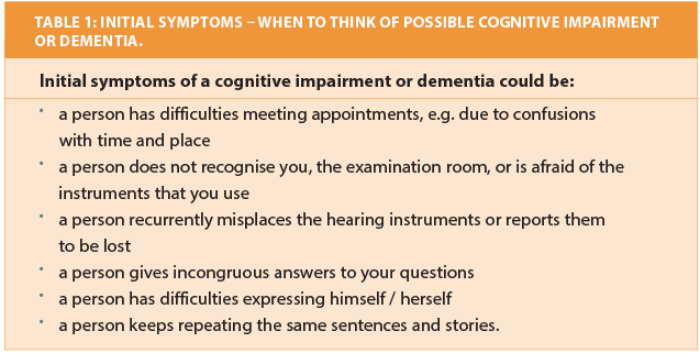 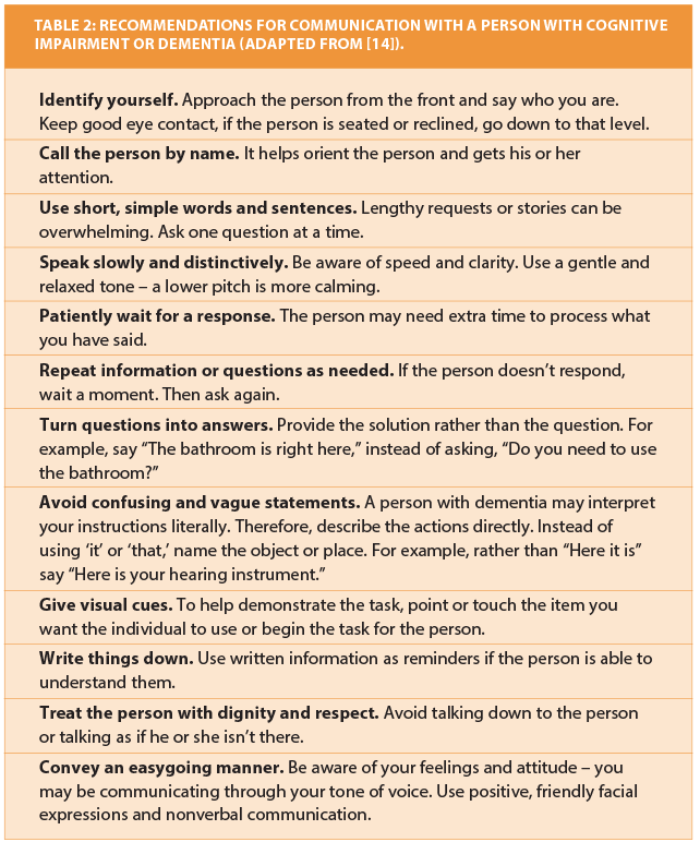 Commonly, people live for many years after the onset of dementia. With appropriate support, many can and should be enabled to continue to engage and contribute within society and have a good quality of life [1]. Communication is key to social participation and interaction with caregivers and health care providers. Table 1 lists possible initial symptoms that are observable in an audiological setting and should trigger consideration of possible cognitive impairment or dementia in a client. Referral within the professional network of geriatricians and memory clinics may be recommended. Besides, optimal hearing should be universally understood to be necessary to daily functioning [4]. Naturally, all clients who are hard of hearing require thorough examination. With some modifications in procedures, clients with cognitive impairment or dementia should be able to reliably participate in hearing assessment and rehabilitation. Table 2 summarises general recommendations for communication during professional interactions with a person who has cognitive impairment or dementia. A recent review of the literature concerning audiological rehabilitation for older adults with dementia provides suggested directions for practice and research [7].

Declaration of Competing Interests: UL has been employed in the research and development of Phonak AG, Switzerland since 2006. 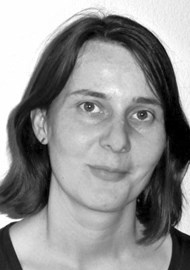