Vestibular function testing has historically been limited by difficulties in testing individual parts of the vestibular apparatus. Jas Sandhu describes new tests available to clinicians that address this problem.

In 2008, ENT-UK published guidelines outlining ways in which balance services could be provided such that patients were diagnosed and managed in a timely manner [1]. As part of this initiative it was suggested that all ENT departments have access to vestibular function testing – a role that is traditionally carried out by vestibular audiologists.

The laboratory based vestibular test sequence usually comprises of looking for signs of peripheral and / or central nystagmus using videonystagmography (VNG) and the assessment of low frequency function of the lateral semicircular canals using the bi-thermal caloric test. Advanced centres may have access to more complex tools such as rotatory chair and computerised postuography.

“Recent advances in technology have provided clinicians with a number of new methods for determining vestibular function.”

Recent advances in technology have provided clinicians with a number of new methods for determining vestibular function. These include the video head-impulse test (VHIT) which assesses the function of all three semicircular canals and the vestibular evoked myogenic potential (VEMP), which provides otolothic information. Combining these new techniques with the established repertoire now allows clinicians to establish sites of lesion more accurately, which can influence subsequent management. However despite the advent of these new assessment methods, there remains an inertia associated with integrating them into clinical practice. There are many reasons for this, including financial issues, training needs as well as scepticism of their clinical value. In this article we discuss these new methods and the latest evidence relating to their scientific underpinning and clinical applicability.

It has been known for a long time now that the balance organ responds to acoustic stimulation. This is thought to be a vestigial remnant as the vestibular apparatus outdates the hearing organ from an evolutionary perspective. The vestibular evoked myogenic potential (VEMP) was brought to the attention of the wider scientific community by Colebatch and Halmagyi in 1992 [2]. It has since provoked an exponential rise in interest amongst scientists and clinicians seeking to understand its physiological basis and to optimise the parameters required to elicit the response. For an excellent recent review see Curthoys et al. [3].

The VEMP response can be recorded in two testing paradigms. The first is known as the cervical vestibular evoked myogenic potential (c-VEMP). This is an inhibitory response that can be measured at the tonically contracted ipsilateral sternocleidomastoid muscle (SCM) in response to loud sounds, bone vibration and galvanic stimuli. The response is thought to be part of the vestibulo-collic reflex (VCR) and starts in the saccule and continues through the inferior vestibular nerve to the vestibular nuclei, the vestibulo-spinal tract and the ipsilateral SCM muscle. The second variant is the ocular vestibular evoked myogenic potential (o-VEMP), which is an excitatory response, recorded inferior to the contralateral eye with the subject looking up. Although there remains some debate as to the precise pathways involved, the general consensus is that the o-VEMP is primarily generated by the utricle and is mediated via the superior division of the vestibular nerve to the vestibular nuclei which then connects to the inferior oblique muscle via the vestibular-ocular reflex (VOR).

VEMP testing is well tolerated by patients as it involves playing a series of tone-pips into the ear whilst recording myogenic activity from either the neck or from below the eye. Furthermore the acquisition time for VEMP measurements is short, allowing the possibility of using it more regularly in patient monitoring.

The head impulse test (HIT) was first described by Drs Halmagyi and Curthoys almost 20 years ago and is based on the oculocephalic reflex. The examiner abruptly accelerates and then de-accelerates the head in the plane of the canal-pair being tested whilst instructing the patient to maintain fixation upon a target. In an individual with no vestibular deficit, fixation is retained and there are no aberrant eye movements. However if the head thrust is conducted in a subject with a high frequency (2-7Hz) semicircular canal lesion, then the eye is unable to allow for the rapid head movement and in order to maintain fixation, a saccade is inserted involuntarily. If this saccade occurs after the head has stopped moving then this is termed an overt saccade as this is detectable with the human eye. However if the saccadic correction occurs during the head movement then this is not discernable to the naked eye and is termed a covert saccade.

These compensatory eye movements require high speed video recordings of the ocular movements in order to be seen. There are several technologies that enable video head impulse testing (VHIT) to be conducted, the most common of which utilise goggles with in-built high speed cameras and head position sensors. In addition to the information relating to the presence or absence of saccades the VHIT also provides information relating to the gain of the VOR which should ideally be unity.

The HIT is based on Ewald’s second law which states that ampullopetal endolymph flow in the horizontal canal causes a greater response than ampullofugal endolymph flow which is thought to be due to the inability of inhibitory stimuli to decrease vestibular nerve firing rates to less than zero. Thus when the head is rapidly accelerated towards the weaker side the VOR is unable to maintain fixation upon a target and therefore a corrective saccade is inserted. The head impulse can be done in the horizontal plane (head tipped down 30°) where the left and right lateral canals can be assessed. Furthermore it can be used to assess the vertical canals testing the right-anterior / left-posterior (RALP) or the left-anterior / right-posterior (LARP) pairs respectively.

The addition of VEMP and VHIT testing to the vestibular test sequence now provides those managing patients with dizziness and imbalance with a more comprehensive picture of vestibular function. Building on the low frequency lateral canal information yielded by the bi-thermal caloric we now can ascertain the functional status (high frequency) of all six canals. Furthermore the cervical and ocular VEMPs provide information concerning the utricle, saccule as well as both divisions of the vestibular nerve. Therefore we can now better than ever isolate the site of lesions thereby allowing more focussed and targeted management strategies to be deployed.

“For the first time we can now assess all five distinct parts of the vestibular apparatus and their respective sub-divisional innervations.”

In addition to providing site of lesion information the VHIT and VEMP also have specific diagnostic benefits such as helping diagnose Ménière’s disease [4] and superior canal dehiscence [5]. Furthermore both tests are well tolerated by patients as unlike the bi-thermal caloric test they do not induce vertigo, thus making them ideal for serial recording to monitor disease progression. These attributes also make VHIT and VEMP testing suitable for use in both the paediatric and geriatric populations and given that the equipment needed for both tests is entirely portable they are readily available to clinicians working within multidisciplinary environments. 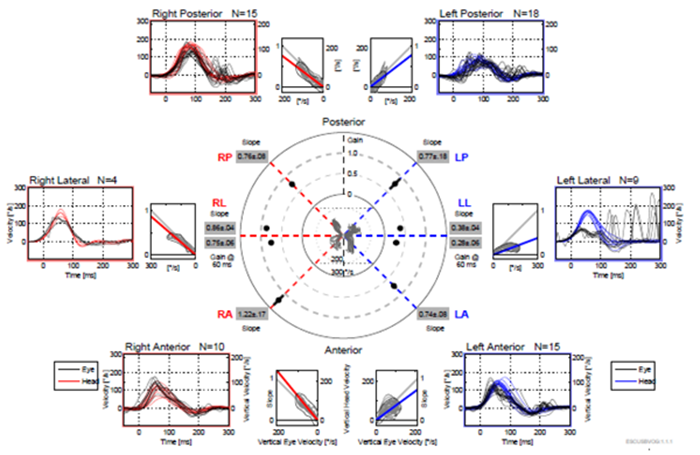 Figure 1: VHIT results in all six canals. Normal responses in all but left lateral canal which has reduced gain and overt saccades.

A 78-year-old gentleman with an MRI confirmed left-sided vestibular schwannoma, complete left sided sensorineural deafness and absent left sided caloric response was presumed to have a ‘dead left ear’ and was listed for resection of the tumour. VHIT testing (Figure 1) showed that only the lateral canal function had been affected and that the other canals were all intact. In addition, c-VEMPs were present indicating that saccule and the inferior vestibular nerve were functional (Figure 2a,b). The o-VEMP was present on the right side (Figure 2c) but was absent in the left ear (Figure 2d) suggesting that the superior division and subsequently utricular function were severely impaired. In this case the role of preoperative counselling was important regarding the likelihood of postoperative vertigo as a result of residual function being sacrificed. 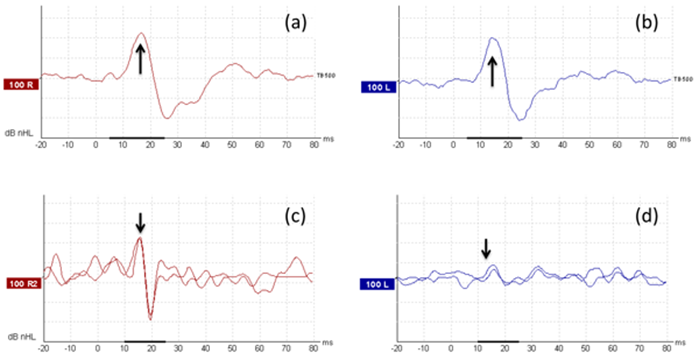 Over the past 20 years we have seen a paradigm shift in terms of technological advancement in vestibular testing. For the first time we can now assess all five distinct parts of the vestibular apparatus and their respective sub-divisional innervations. These tools have the potential to help clinicians make more accurate diagnoses and more importantly generate bespoke management plans, which ultimately should result in better patient outcomes. 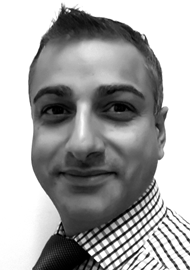