Barotrauma is an injury which is due to the effects of pressure upon an air-containing space. Healthy middle ear cavities and paranasal sinuses are normally in equilibrium with the atmospheric pressure, but if an individual moves away from the surface, either by flying or diving, that equilibrium is maintained only by the movement of air out of, or into the cavities.

Gaseous exchange between the cavities and the circulation tends to reduce the pressure, because the partial pressures of gasses ­within the venous circulation is slightly lower than inspired air. At rest, this movement of air is practically negligible, but it is considerably greater when flying or diving. It follows that individuals whose middle ears and sinuses are perfectly healthy under normal circumstances, may nonetheless experience barotrauma.

All three Armed Services have aviators (because of the rate at which their aircraft may descend, fast jet aircrew are particularly vulnerable); and the Royal Navy and Army have divers. Divers may repair defects in ships, ensure security for ships alongside, and engage in bomb disposal. At one time, submariners were required to undertake escape training, which required them to be able to dive to 30 metres; and Special Forces’ duties may involve diving.

In order to assure the health and well-being of personnel, the Services have specialist occupational medicine departments: under water medicine, at the Institute of Naval Medicine, and aviation at the RAF Centre for Aviation Medicine. Central to the health and safety of personnel is selection: they are passed fit for flying and diving duties only if they can demonstrate the ability to clear the ears, usually by seeing movement on Valsalva’s manoeuvre. Nasal polyps are a contraindication. 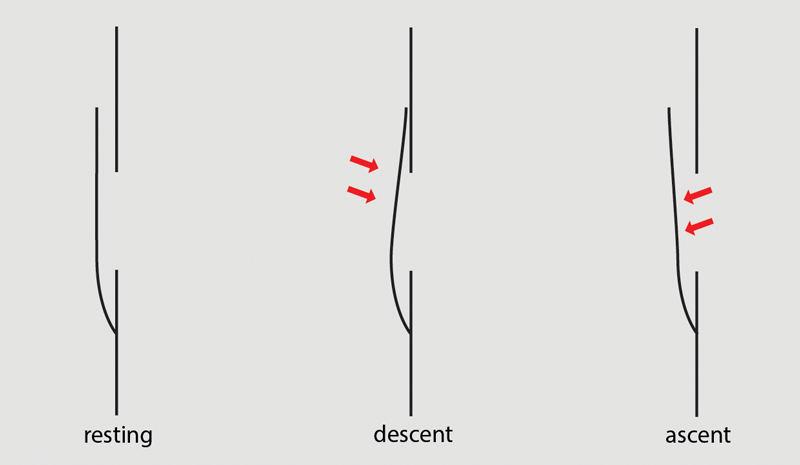 The air passages to the middle ears and sinuses have no valves, but the anatomy tends to block the ingress of air. If the space around the uncinate process is narrow and it comes into contact with the maxillary sinus ostium, any further attempt to descend will force the two structures together all the more: this phenomenon is known as ‘locking’. On the other hand, on ascent, the uncinate process is pushed away from the ostium and the air escapes readily - Figure 1. The same considerations apply to the Eustachian tube. The solution to locking is to ascend a short distance, clear the ears or sinuses, and then continue; but if the situation has persisted, oedema may make it impossible to unlock. The general advice is to clear early and often, but when diving, if all else fails, the dive should be aborted. No such easy option exists for aircrew who have to return to ground eventually.

Travelling in both directions at a steady rate gives rise to the biggest pressure changes closest to the surface. The pressure changes in flight are relatively modest: 0.5 atmospheres of pressure (atm) is reached at about 6000 metres (commercial airliners are pressurised to 2500 metres or less), but 2 atm is reached at only 10 metres below the surface. When diving, the ambient pressure doubles in the first 10 metres; it takes a further 20 metres to double the pressure again, and then 40 metres for a further doubling, and so on.

In the author’s experience, sinus barotrauma is rare: it appears to be more common amongst aircrew than divers, and in all probability, many of the latter cases go unreported. The author can recall one aviation incident report in which a pilot had failed to set the controls properly to ensure cabin pressure maintenance, and when he took corrective action, the sudden pressure change gave rise to epistaxis. The sortie was aborted on the ground that the pilot’s nose was no longer serviceable. But that was an exception! Sinus barotrauma usually causes frontal headache or mid-facial pain on descent; apart from those of underlying chronic rhinosinusitis, other symptoms are rare. Examination is unremarkable in the absence of disease. The solution is endoscopic sinus surgery (or balloon sinuplasty) which is this sense is truly ‘functional’.

Middle ear barotrauma may be avoided by the simple solution of inserting ventilation tubes. Whilst this does not give rise to difficulty in aviators, they are contraindicated in divers because of the risk of water passing into the middle ear cavity. As already mentioned, divers may avoid middle ear barotrauma by aborting the dive, and if this is a persistent problem, the individual will be made unfit to dive. Occasionally, even an experienced diver will be required to dive rapidly, perhaps to go to the rescue of a buddy in difficulty, and this may lead to middle ear barotrauma. Grading systems exist, but the author favours a description of, ‘mild’, ‘moderate’, and ‘severe’. Initially there is hyperaemia of the tympanic membrane; followed by a middle ear effusion which may contain blood; and then perforation of the tympanic membrane. If the barotrauma has been relatively rapid, there may be little more to see than a perforation, which tends to be a tear in the tympanic membrane, rather than a hole - Figure 2. 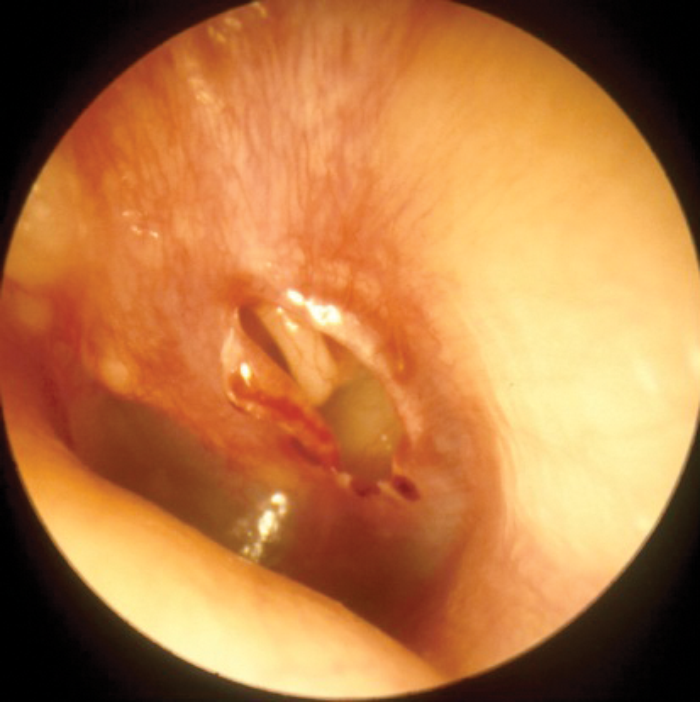 Although tympanic perforations due to disease may be reluctant to heal, traumatic perforations usually heal rapidly - typically within two weeks. There is no hard and fast rule, but when the tympanic membrane looks normal again and the individual can demonstrate the ability to clear, flying or diving may be resumed.

Sinus and middle ear barotrauma are relatively innocuous, but inner ear barotrauma gives rise to much greater concern. In the author’s experience, it is confined to divers. Typically, difficulty arises during descent; effort is made to clear the ears, but instead of aborting the dive, the diver persists. The increase in intrathoracic pressure which accompanies a Valsalva manoeuvre (particularly a vigorous one if clearing the ears is difficult) is transmitted via the cerebrospinal fluid (CSF) and the cochlear aqueduct to the inner ear and any weakness in the round or oval windows may lead to a perilymph leak into the middle ear which has failed to clear. This damages the delicate structures in the cochlea and vestibule and leads to sensorineural hearing loss (which may vary from mild to total) or vertigo, or a combination of the two.

Whether an attempt at plugging a perilymph leak is likely to be beneficial is uncertain, but the important question is whether the individual is fit to dive again. Military (and other occupational) diving is subject to employment law: the principle is that if one ear has been damaged, every effort should be made to protect the other one, so even if there has been recovery, a single episode of inner ear barotrauma renders a diver unfit for future service.

The differential diagnosis of inner ear barotrauma includes inner ear decompression illness. Because the prognosis and treatment of the two conditions are very different, the distinction is important. Decompression illness (DCI) occurs because nitrogen, which has dissolved in the blood at depth, escapes as bubbles which produce vascular insufficiency which in turn leads to a wide variety of symptoms depending upon the location: the best known is the ‘bends’ which is musculoskeletal injury. DCI is avoided by slow ascent, typically by pausing for a set period at set depths according to tables, or nowadays a dive computer: this allows the dissolved nitrogen to escape so slowly that no harm is done.

Inner ear barotrauma can occur at almost any depth, but DCI requires sufficient depth and duration: the deeper the dive, the shorter the duration, but any dive of no more than 9 metres is unlikely to result in decompression illness. By definition, DCI occurs during, or after ascent, so if difficulty has occurred during descent, or on the bottom, DCI is excluded.

An inner ear barotrauma (which has occurred on descent) may not be apparent until the diver has surfaced: communication under water is traditionally non-verbal. DCI has a latent period because it takes time for the air bubbles to form and cause injury. The exact onset of symptoms is, therefore, crucial.

The treatment of a DCI is recompression in a hyperbaric chamber, but with inner ear barotrauma, further pressure changes should be avoided. Because DCI is usually the result of an unsafe dive profile, an individual who has sustained it is fit to dive again subject to there being no permanent disability. It follows that not only effective treatment, but the prognosis depends upon a sound diagnosis: some cases are by no means straightforward. Difficulty clearing, particularly if great effort has been made, and the onset of symptoms during or immediately after the dive, point to inner ear barotrauma. Absence of difficulty during the dive, coupled with an unsafe dive profile point to DCI. 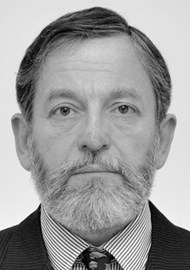