Can we prevent chronic rhinosinusitis?
By Claire Hopkins

The old adage ‘prevention is better than cure’ is considered by Professor Hopkins in respect to chronic rhinosinusitis, a condition affecting around 10% of the adult population and associated with huge impact on quality of life and economic cost. A more determined focus on primary prevention of CRS would be very welcome, something that she will be discussing in detail at ERS2018.

The focus of modern medicine has shifted from ‘illness management’ to achieving ‘wellness’; ideally, prophylactic measures should exist to prevent the development of illness. However, the rising prevalence of many chronic diseases has shown this to be inadequate and that strategies to minimise the impact of disease are required. This approach is a fundamental tenet of precision medicine [1], which aims to tailor prevention and management of disease to the individual patient in order to optimise outcomes and minimise costs.

Chronic rhinosinusitis (CRS), with nasal polyps (CRSwNP) and without (CRSsNP), is a highly prevalent chronic condition estimated by epidemiological studies to affect 5-15% of the general adult population. The aetiology and pathophysiology of CRS is poorly understood, making disease prevention a significant challenge.

Prevention may be thought of in three main dimensions (Table 1). 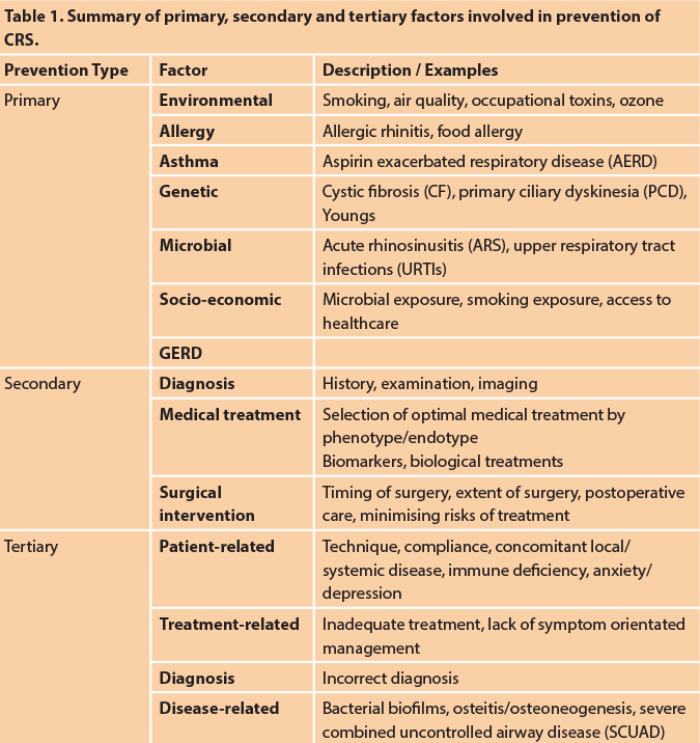 “Dental disease is often overlooked, and with growing difficulties in accessing NHS dental care we may see an increased prevalence.”

Primary prevention aims to reduce incidence of disease by reducing exposure to risk factors or triggers, and will be considered in more detail in this article.

Secondary prevention aims to reduce disease prevalence by early detection and appropriate management, returning a patient to full health and preventing disease persistence. This aims to reduce severity and impact of disease from the outset, and is the area where we can have greatest impact as ENT surgeons. International guidelines facilitate in terms of diagnosis and appropriate medical therapy regimens, but further research is required to define the role of biological agents and immunomodulatory agents such as low-dose macrolides. Biomarkers that allow personalised treatment will help ensure patients receive the most effective treatment from the onset of disease. It is also important to establish whether antibiotic treatments may actually be detrimental due to effects on the microbiome. How timing of surgery may impact on patient outcomes has been discussed in a previous ENT & Audiology News article [2].

“The focus of modern medicine has shifted from ‘illness management’ to achieving ‘wellness’.”

Tertiary prevention aims to reduce the impact of ongoing chronic disease and its complications in order to maximise quality of life and restore normal functioning as much as possible. Poor disease control may arise from poor patient compliance, incorrect diagnosis, inadequate surgery, as well as from host, or disease-related factors (Figure 1). Coexisting depression may modify symptoms’ severity, and may need to be managed in parallel in order to achieve adequate symptom control. 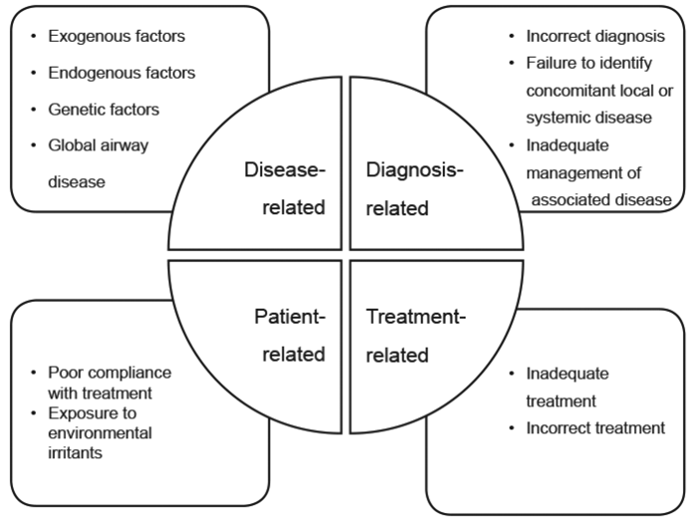 CRS is a heterogeneous disease, where inflammation, mucociliary dysfunction and changes in the microbial community interact with differing influence to cause disease [2]. Primary prevention measures that effectively target the specific causes and risk factors of CRS remains the ultimate goal for disease prevention. Promoting a healthy lifestyle, reducing unhelpful health behaviours, improving host immunity and creation of an environment with minimal exposure to toxins are all factors which have been investigated as possible strategies to reduce the incidence of CRS.

Exposure to toxins, especially tobacco smoke, ozone and particulate air pollutants such as diesel exhaust particles, may exacerbate airway inflammation, but the significance in development of CRS is unclear. Indoor air quality is likely to be more important in the development of respiratory disease as pollutant levels may be substantially higher. Studies have shown strong links between occupational exposure to toxins and asthma and rhinitis, although again there is a paucity of data for CRS.

Evidence for both active and passive smoking leading to increased risk of CRS is much stronger. The GA2LEN survey of over 50,000 patients across Europe found that CRS was more common in smokers [odds ratio (OR) 1.7] compared with non-smokers [3]. There is a dose-dependent association between smoking and self-reported rates of CRS, with a 1.5% increase in prevalence for each additional year of smoking. Passive smoking in childhood or adult life also seems to have a significant association with CRS. Aggressive taxation on tobacco products, plain packaging with warning labels and repeated counselling at every healthcare consultation are important to maintain the declining prevalence of smoking.

It has been proposed that mucosal oedema in allergic rhinitis (AR) may compromise ventilation or even obstruct sinus ostia, leading to mucus retention and infection. However, the causal role of allergy in CRS has been long debated, and remains contentious. No studies have assessed the effectiveness of management of AR on the outcome of established CRS or the risk of subsequent development of CRS, and further research in this area is needed before it can be recommended as a means of CRS prevention. However, early detection and management of AR has been shown to have a positive impact on the development of lower airway disease, and is recommended for that aim. Although patients often attribute their CRS to food allergies, there are only limited studies assessing the association between CRS and food allergies [with the specific exception of low salicylate diets in aspirin-exacerbated respiratory disease (AERD)].

There is strong evidence to show that asthma and CRS, especially CRSwNP, frequently coexist. Several studies have shown that patients with asthma have a higher likelihood of having CRS, and the GA2LEN survey showed that in all age groups, men and women, and irrespective of smoking behaviour, asthma was associated with CRS [3]. The Greisinger Health Study found higher rates of pre-existing asthma in those developing CRS compared with healthy controls (OR 2.8 for CRSwNP and 1.7 for CRSsNP). Similarly, higher premorbid rates of bronchitis, pneumonia and bronchiectasis have been reported. Again, a causal relationship has not been confirmed, but it is postulated that acute infective exacerbations (or their subsequent treatment) may modify susceptibility to developing CRS.

The natural history of CRS, and the relationship between acute rhinosinusitis (ARS) and CRS development have been very poorly studied. Using the definitions of ARS and CRS based on duration alone, all episodes of CRS must start as ARS. However, whether CRS is truly persistence of ARS or whether CRS is a completely different pathophysiology from the outset is unclear. Epidemiological studies found that premorbid ARS (OR 2.2 for CRSwNP, OR 3.2 for CRSsNP) and acute upper respiratory tract infections (URTIs) (OR 1.3 for CRSwNP, OR 1.6 for CRSsNP) were more prevalent in patients developing CRS compared to those who did not; however, this data was extracted from electronic health records, and may simply reflect the diagnostic dilemma above. One study followed patients with ARS using repeated aspirates; those that developed chronic symptoms transitioned from bacteria commonly associated with ARS (Streptococcus pneumoniae, Moraxella catarrhalis) to a mixed infection which involved anaerobes [4].

However, there is no evidence to suggest that active management of ARS or URTIs may reduce the risk of subsequent development of CRS. Indeed, increased use of antibiotics may cause profound and detrimental effects on the microbiome [5]. Antibiotic stewardship has never been more important; the balance of resident microbes is increasingly recognised as important in onset of CRS, and reduced diversity is found in patients with CRS compared to controls, and in CRS patients following antimicrobial therapy. Given that current evidence suggests that the human microbiome becomes established early in childhood [5], there may be only limited opportunity to restore this later in life.

“There is currently little research on the prevention of CRS, and certainly options for primary prevention are very limited.”

Unlike many chronic diseases, there is little data suggesting an increased risk of CRS in those with lower socio-economic status, which may be linked to both microbial exposure and higher rates of tobacco exposure. Indeed, one study of CRS in children suggests that when compared to controls, children with CRS were more likely to be white and privately insured; this however may simply reflect inequality of access to healthcare.

Dental disease is a well-recognised cause of chronic rhinosinusitis, accounting for 25% of cases in one series of CRS. Restrictions in access to dental care have been proposed to lead to an increase in the incidence of odontogenic disease in the UK. Good dental hygiene, caution during exodontia to avoid fistula formation and loss of dental roots into the antrum may prevent the development of odontogenic disease.

The relationship between gastroesophageal reflux disease (GERD) and upper and lower airway diseases has been debated in the past. However, recent epidemiologic studies using electronic health registries and systematic reviews report that GERD and CRS often coexist. A causal relationship between GERD and CRS has yet to be firmly established, but GERD may be a risk factor for development [6, 7] Again, further research is required to establish whether treatment of GERD may reduce the prevalence of CRS.

There is currently little research on the prevention of CRS, and certainly options for primary prevention are very limited. Current evidence supports anti-smoking advice, optimal management of asthma and allergic rhinitis and improving both internal and external air quality in order to reduce the incidence of CRS. Early diagnosis and timely introduction of treatment in order to achieve disease control may minimise chronicity and severity of the disease. More research is needed to define both best medical and surgical management, and the role of endotyping to choose different interventions. Patients with uncontrolled disease remain an ongoing challenge in CRS management, and novel treatments are much needed. 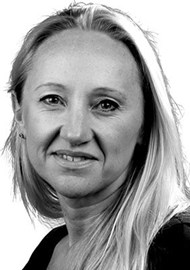