Chronic rhinosinusitis management: back to the future?
By Harsha Kariyawasam and Magdalena Dziadzio

Immunology is a dim and distant medical school memory to many ENT surgeons, but the increasingly complex immunology of chronic rhinosinusitis is fascinating (honestly!). Medical management options in CRS no longer just involves saline and steroids, and we need to be aware of the newer options for some of our patients. In this article, Harsha Kariyawasam and Magdalena Dziadzio eloquently explain the emerging concepts of CRS immunology and how treatment can (and will) be tailored to the individual patient.

Chronic rhinosinusitis (CRS) is estimated to affect up to 12.5% of the population or a staggering 31 million patients each year in the USA. Current treatment strategies are often ineffective and there is thus an urgent unmet clinical need. CRS is broadly divided into two clinical subtypes, CRS with and without nasal polyps (CRSwNP and CRSsNP respectively).

This classification is far too simplistic as it fails to identify disease phenotypes (severity and clinical characteristics) and endotypes (disease mechanisms) that should determine treatment strategy and outcomes. Recent advances in understanding the immunology of CRS with distinct subtypes and the emerging success of targeting key immunological players in asthma dictates that a ‘one size fits all’ treatment approach to this disease must now change.

‘’A ‘one size fits all’ treatment approach to this disease must now change.’’

T cells are key drivers of inflammation in CRS and can be differentiated according to their secretory cytokine profiles into Th1 and Th2 subsets. Th1 cells are characterised by production of γ-interferon (IFN) and are associated with predominantly neutrophilic inflammation, whilst Th2 cells produce interleukin (IL)-4 (responsible for B cell immunoglobulin switching and IgE synthesis), IL-5 (eosinophil development and survival) and IL-13 (key inducer of Th2-driven inflammation and mucus production). IL-4 and IL-13 share a common receptor IL-4Rα/IL-13Rα1. Other inflammatory cells [particularly important are Type 2 innate lymphoid cells (ILCs)] along with structural cells (such as epithelium) also generate such cytokines and therefore the term T2 rather than Th2 disease is now used.

CRSwNP is predominantly a T2 disease with excess IgE (IL-4 and IL-13), marked eosinophilia (IL-5 and IL-13) and tissue remodelling (IL-4, IL-5 and IL-13) (Figure 1). Marked amplification of T2 inflammation is evident in CRSwNP and this is particularly so in more severe disease recalcitrant to treatment. Staphylococcus aureus enterotoxins acting as superantigens and generation of local mucosal IgE are important enhancement mechanisms [1]. IL-25 (signalling via the IL-17RA and IL-17RB receptors) and IL-33 (signalling via ST2 ) are relatively newly described cytokines rapidly produced as the first line of defence against infection and are potent enhancers of allergic inflammation, acting thus as the ‘bridge’ between innate and adaptive airway mucosal immunity. 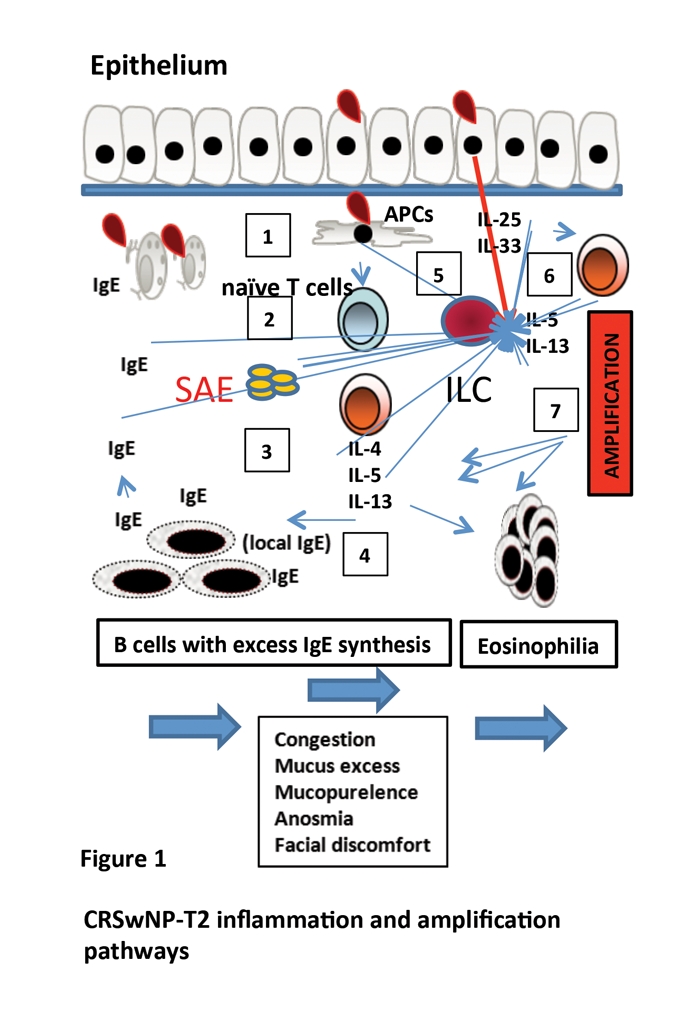 Figure 1. CRSwNP-T2 inflammation and amplification pathways. In CRSwNP the classic model of inflammation is that of antigen presenting cells (APCs) (1) activating naïve T cells and directing them into a Th2 cell subtype (2) with subsequent production of key cytokines such as IL-4 (B cell to plasma cell switching and IgE production), IL-5 generation (eosinophil excess), and IL-13 (enhanced inflammation) (3) with propagation of inflammation (4). This direct pathway does not fully explain the excess and almost treatment resistant inflammation present. Staphylococcal enterotoxins (SAE), epithelial derived IL-25 / IL-33 all act as inflammatory amplifiers (5). IL-25/33 activate innate lymphoid cells leading to excess cytokine production, but also Th2 cells can also be directly activated by these cytokines (6) thus bypassing classic inflammation with amplification of inflammation (7).

Until recently, amplification of T2 inflammation was considered to be via the ILC pathway where, upon IL-25 or IL-33 binding, these cells secrete large amounts of IL-5 and IL-13 leading to marked inflammatory expansion [2]. Nasal polyps are rich in ILCs [3]. Recent work has shown that in CRSwNP, T cells also co-express the IL-25 and IL-33 receptor with rapid IL-5/IL-13 secretion and marked induction of T2 inflammation [4]. The slower antigen presenting cells / naïve T cell pathway of T2 inflammation is bypassed. This is an important finding as it confirms that key effector T cells can be rapidly activated by innate immune signals generated by common environmental insults such as viral infection or pollution.

These findings overall begin to explain why such intense inflammation occurs in CRSwNP and why only systemic corticosteroids have clinical impact, but even then the effects are short lived. A therapeutic strategy of blocking key immune mediators offers an alternative approach and early data suggests that such intervention is indeed effective.

Omalizumab (Xolair, Genentech) is a humanised monoclonal antibody targeting the high-affinity receptor binding site on IgE (Cε3) to form a drug-IgE complex and effectively depletes free IgE. It is delivered as a prefilled syringe and administered subcutaneously. The FcεRI high-affinity receptor that binds specific IgE on basophils, mast cells, and dendritic cells is down-regulated with time, leading to a general step down in overall allergic inflammation. Licensed for allergic asthma, evidence of significant impact on CRSwNP is available in a proof of concept study [5].

Significant reduction in polyp size and general improvement in nasal symptoms along with quality of life was demonstrated. Mepolizumab (Nucala®, GSK) is a humanised IgG1 / κ monoclonal antibody against IL-5 that depletes tissue eosinophils leading to significantly less asthma exacerbation [6] and just received its licence for eosinophilic asthma. A proof of concept study confirmed significant reduction in polyp size and clinical symptoms after just two infusions, each a month apart [7]. Emerging data on blocking IL-4 / IL-13 signalling with Dupilumab, an IL-4Rα blocker, again in an easy to deliver subcutaneous formulation, in otherwise difficult to treat CRSwNP, is very encouraging and more detailed studies are underway [8].

Obviously, picking out biomarkers that predict treatment response is important to ensure the right patient gets the right drug [9, 10]. Developing strategies to block targets such as IL-25 and IL-33 will offer further therapeutic options in the future (see Table 1). CRSsNP is a broad term that covers a variety of diseases with sinonasal focus. Infective (typically bacterial) rhinosinusitis syndromes in relation to immunodeficiency states have been particularly difficult to diagnose and therefore treat effectively. Primary immunodeficiency diseases (PIDs) are rare but life-threatening diseases of the immune system which can first manifest with recurrent upper respiratory tract infections and therefore present to ENT specialists [11]. 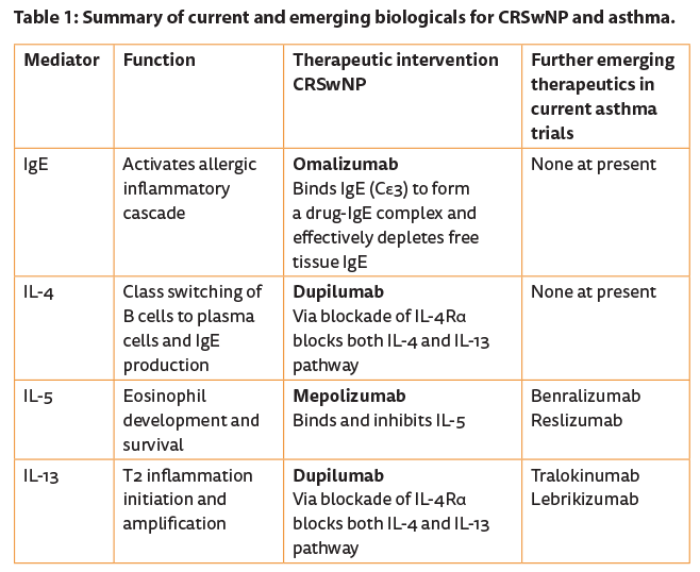 Unfortunately, there is often a diagnostic delay in PIDs, resulting in end organ damage due to chronic infections and inflammation. In particular, patients with PIDs due to B-cell defects, such as common variable deficiency (CVID), selective IgA deficiency, specific antibody deficiency, IgG subclass deficiency or X-linked agammaglobulinaemia (XLA) can all present with or suffer from CRSsNP or even CRSwNP. Until now, diagnosis of PIDs relied on the measurements of serum immunoglobulins, specific antibodies, vaccination responses, lymphocyte subset phenotyping and proliferative responses [12].

Clinical management is based on breakthrough and / or prophylactic antibiotics and immunoglobulin replacement therapy [intravenous (IVIG) or subcutaneous (ScIg)]. These therapies may lead to improvement in CRS symptoms in some, but not all, patients. This is a hint that immune dysregulation plays a role in immunopathogenesis. Recent scientific advances in the field of immunodeficiencies and in particular the availability, and more acceptable cost, of next generation gene sequencing will change our approach to the diagnosis and management of PID. Whole genome or exome sequencing may be highly informative for elucidating more common disease-causing genetic alterations as well as the assessment of relevant disease-modifying loci or genes [13].

Over the last 10 years, several new monogenetic syndromes, previously encompassed within the heterogeneous group of CVID-like immunodeficiencies, have been identified and described [14]. For example, mutations in genes encoding phosphoinositide kinase 3 delta (PIK3CD), nuclear factor kappa B 1 and 2 (NFKB1 and NFKB2), lipopolysaccharide-responsive beige-like anchor protein (LRBA), interleukin 21 (IL-21) and its receptor (IL-21R), inducible T-cell co-stimulator (ICOS), cytotoxic T-lymphocyte-associated protein 4 (CTLA4), signal transducer and activator of transcription 1(STAT1), CD27, CD19, CD20 or CD21 all result in PIDs, previously encompassed within the CVID umbrella. All these syndromes can manifest with recurrent upper and / or lower respiratory tract infections (RTIs), including CRS, alongside other autoimmune, inflammatory and infective features.

‘’A multidisciplinary team approach will enable the best outcomes for our patients.’’

Infections usually improve with age in these patients once the adaptive immune system matures [15]. Secondary immunodeficiencies may also lead to recurrent infections of the sinuses. The number of patients with secondary immunodeficiencies is increasing due to dramatic advances in treatments for cancers, systemic rheumatic diseases and autoimmune conditions, and in solid organ and hematopoietic stem cell transplantation. Chemotherapeutic agents, some biologic agents, e.g. rituximab, immunosuppressants or small molecule-targeting drugs, e.g. ibrutininib may result in cellular and / or humoral immunodeficiency in some patients.

Therefore clinical practice is changing and ENT specialists will be routinely managing such complex patients. The medical approach to upper and lower airway disease is rapidly expanding and this is an exciting time for clinicians. The potential to treat ‘one airway’ with ‘one approach’ is now reality. ENT surgeons in training must start to incorporate training in immunology and airway disease now, whilst established surgeons must begin to approach patients in a combined manner with physicians who can help select the most appropriate therapy. More often than previously, a multidisciplinary team approach will enable the best outcomes for our patients. The future is here. 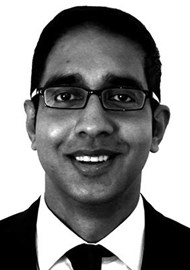 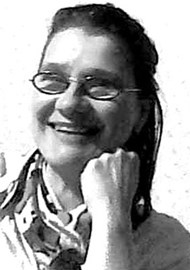