Dr KJ Lee: From Penang to Presidency of the AAO-HNS… and beyond!
By Keyu Liu

Anyone who’s ever stopped to wonder about the personalities behind well-known names in ENT will enjoy Keyu Liu’s article on Dr KJ Lee, rich with stories of his travels, inspirations, and personal philosophies, alongside his momentous achievements.

If you’ve experienced the ENT Board Certification Examination in the United States, you’ve probably heard of Dr KJ Lee’s Essential Otolaryngology - Head and Neck Surgery. The book celebrates its 45th anniversary this year, releasing a 12th edition. In addition to updating the contents, the new edition will incorporate a fascinating prologue overviewing our specialty’s growth; not only the development of numerous new technologies such as cochlear implants, laser surgeries, and robotics, but also how the specialties of rhinology and facial plastic surgery, head and neck, skull base surgery and allergy have evolved.

KJ recalls the end-of-year farewell dinner in 1967 held by the Columbia St Luke’s Department of Surgery, where each departing resident would announce what they’d be doing the following year. Some would be entering residencies in cardiac surgery, orthopaedic, neurosurgery or general surgery. KJ was too embarrassed to say “otolaryngology”, because at that time it was not the respected specialty it is now. Hence, KJ stood up and said “I’m going to Harvard for head and neck surgery”, whereby there were murmurs about what kind of specialty this was! Head and Neck is rightfully the purview of our speciality. He coined that term in 1967.

“Life is better when you are happy, and life is best when other people are happy because
of you.”

In addition to Essential Otolaryngology, KJ Lee is the author of numerous highly-regarded otolaryngology publications, for both professionals and the lay public. Endorsed by US Congresswoman Rosa DeLauro, Lee also published Healthcare Reform through Practical Clinical Guidelines within weeks of the adoption of Obamacare. It hoped to initiate a foundation to guide the decision makers to “Pay for Performance, Pay for Value”, which is today’s buzzword in American Healthcare reform.

Dr Lee has served on the clinical faculty at Yale University School of Medicine for over four decades and was chief of otolaryngology for over two decades at the Hospital of St Raphael, a teaching hospital of Yale Medical School. Together with his colleagues, he developed one of the busiest and most prestigious practices in the nation.

Before it was prevalent, he developed ancillary services such as dispensing of hearing aids, in-house vestibular diagnosis and treatment, and allergy diagnosis and treatment. Aiming to bring clinics closer to the patients, he established medical sites in eight suburban towns. When lecturing on the business of medicine, Dr Lee emphasises two points: “You practise medicine and have to run a business,” and “You run a business through the practice of medicine.” His belief firmly lies in the former, not the latter.

Colleagues and partners are always curious about Dr Lee’s source of energy and inspiration, as well as his life and hobbies outside of work, which he keeps very private. As a long-anticipated disclosure: he loves coffee, he sleeps four hours a night and has done for five decades, he gets his inspiration under a long hot shower, he relaxes watching thriller movies, his favourite song is Amazing Grace and his favourite movie is Bridge on the River Kwai. One of hisfavourite quotes is “Life is better when you are happy, and life is best when other people are happy because of you”. However, his life experience has not been without obstacles. When he was 15 years old in Penang, Malaya; a developing country at that time, Lee accidently flipped through a magazine that introduced three institutions, Harvard, Columbia and Yale.

He had a dream then; to study at two of them and become a professor at the third. However, in 1957 SAT exams were not offered in Malaya, and there were no college counsellors. Lee did not even have addresses for these universities. Frustrated that the secretary of the American Consulate would not give him an appointment, he decided to create his own opportunity. He rode his bicycle to follow the American consul home, and asked him how to locate the addresses of Harvard, Columbia and Yale. Fortunately, the consul was a sympathetic man who was also a graduate of Columbia. With his kind assistance, Lee embarked on the path that he built for himself, overcoming his initial frustration. 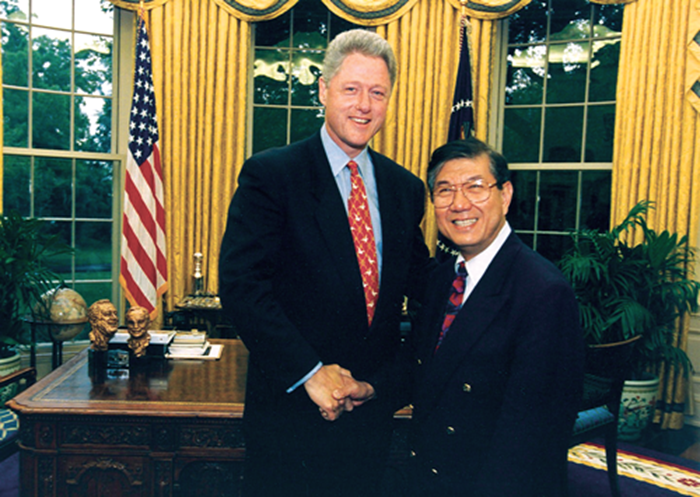 First stepping foot in the United States at the age of 17 from Malaya, Dr Lee finished his undergraduate studies with honours at Harvard and attended Columbia University College of Physicians and Surgeons; he subsequently completed his otolaryngology residency at Harvard. He served in the United States Army during the Vietnam War, during which he helped develop the Madigan Army General Hospital Otolaryngology Residency as Assistant Chief. In the 1980s, Dr Lee researched and gave courses on argon, YAG and CO2 laser surgery. His Triological Society thesis was on the trans-septal approach to the pituitary, which received the Honourable Mention. He also partnered with the state telephone company to carry out clinical trials in the early model of the auditory brainstem response instrument.

“To the younger generation Dr Lee would smile and offer the following words of encouragement: you have to have love and passion for your work.”

Surprisingly, being an ENT doctor was not Dr Lee’s initial choice of career. The teenage Lee was greatly motivated by two events in 1957: the launch of Sputnik and the award of the Nobel Prize to two Chinese nuclear physicists, Yang and Lee. Deciding to strive for a similar path, though against his father’s wishes, Dr Lee chose nuclear physics as a possible career. However, not achieving the required level of accomplishments at Harvard, he decided to switch to study medicine. How did he choose the specialty of otolaryngology? From the age of two, Dr Lee had suffered from two or three episodes of otitis media per year, leading to right facial paralysis at the age of 16 and right mastoidectomy at the age of 23, which finally cured the recurrent otitis media. Yet, unfortunately, he later developed right-sided Ménière’s disease during his residency. These experiences led Dr Lee not only to choose otolaryngology as a profession, but also to subspecialise in otology. To continue his contribution to the field, he would like to donate his temporal bones for research. 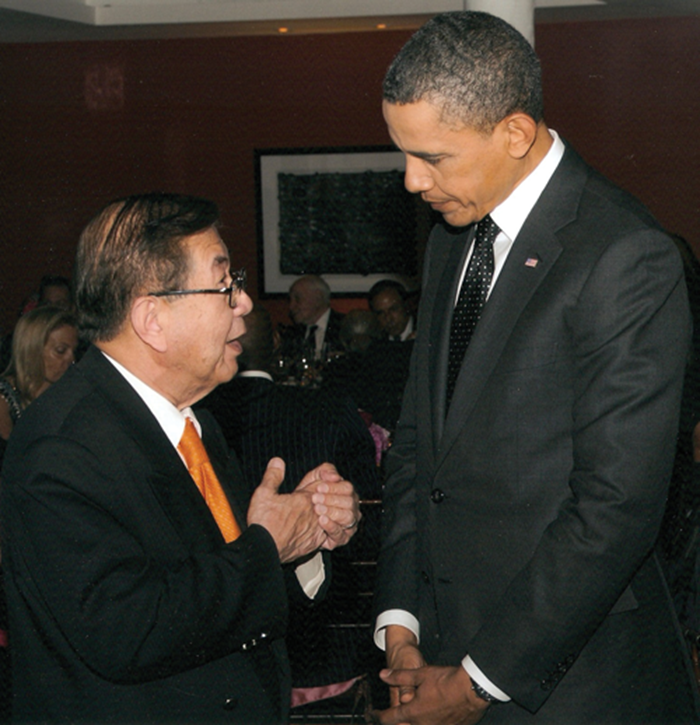 He first attended the annual meeting of the American Academy of Otolaryngology in 1967 as a first-year resident. He was so impressed with the rich educational opportunities and networking that he has attended the annual meeting every year since 1971, except for 1976 when he had surgery on his back for fibrosarcoma. He was fortunate to be nominated to the American Academy’s Board of Directors in the early 1980s. Since then he has served on the board for 18 years: as secretary / treasurer for six years, international coordinator for six years, and as president in 2001-2002. He is honoured to have received three Presidential Citations, an Honour Award, and two Distinguished Service Awards from the American Academy. When asked about his style of leadership his advice is to “always listen to others, always give credit to others”.

He believes strongly that the international communities bring a wealth of knowledge to the American Academy. He has also served as chairman of the hospital medical board and president of the hospital medical staff as well as the New Haven County Medical Association. He was president of the Centurion Club of the Deafness Research Foundation for several years. Outside of medicine, he has served on the board of trustees of his church as well as on the finance committee. He was past president of a municipality called Sachems Head Association and has been appointed a harbour commissioner to protect the environment. 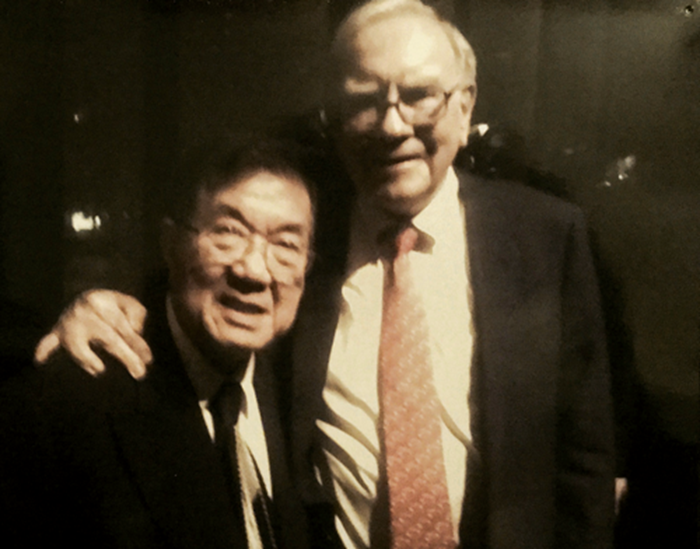 Dr Lee is optimistic about the future of medicine, but feels there are areas for improvement which demand further focus. The American electronic health records system has been in chaos since its inception. Doctors almost unanimously complained about the non-user friendly interface which decreases efficiency and increases errors. Together with MIT engineers, Dr Lee is developing a user-friendly interface app for use by all EHRs to solve this crisis. His current frustration is convincing engineers to program the software to follow the doctors’ workflow! In addition to his endeavour for medical efficiencies, he recently cofounded the TPIU (The Patient Is U) Foundation. TPIU’s mission is to educate all healthcare providers, government officials, insurance companies, and anyone with patient contact to treat as if “the patient is you”. Lee stresses the importance of having “knowledge to treat” and a “heart to care at a sensible cost”. On the political front, Dr Lee has been involved in healthcare reform with the Clinton and Obama administrations, as well as discussing similar issues with American business magnate, investor and philanthropist, Warren Buffet (Figures 1-3). 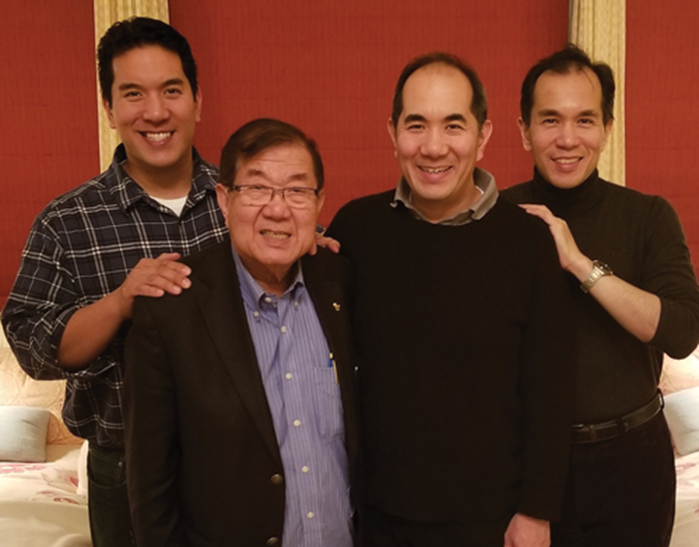 To honour his family, Lee has also endowed the CT Lee Lectureships (named after his parents) at Harvard, Yale and Columbia, which aim to bring spirituality into our profession. Of all his successes, Dr Lee values his family as his greatest accomplishment (Figure 4). His loving wife and best friend of 52 years, Linda, attended Vassar, Columbia and MIT. She contributed significantly to the first edition of Essential Otolaryngology. Their three Harvard educated sons are a barrister (litigator), a private equity managing partner and a movie / media consultant in Hollywood.

To the younger generation Dr Lee would smile and offer the following words of encouragement: “you have to have love and passion for your work”. And if you ever noticed, inside the top left pocket of Lee’s suit, right by his heart, there is a pen that lights up in the dark upon a click, and engraved on its side is the line by Hippocrates: “Cure sometimes, treat often, comfort always”. Indeed, just as the line implies, the motto of Dr Lee’s career is, “A good doctor takes care of the disease, a great doctor takes care of the patient”. 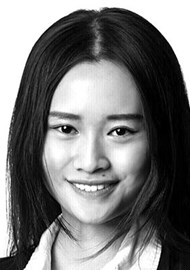