As of December 2020, seven robotic surgical systems have received approval for use in different jurisdictions, and many more task-specific robots are in the pipeline. Jack Faulkner takes us through what’s on the horizon for head and neck cancer surgery.

Over the last two decades, robotic-assisted minimal access surgery has rapidly expanded and is now the gold standard approach within several surgical specialities (primarily urology, general surgery and gynaecology). Transoral robotic surgery (TORS) has cemented itself within the treatment of oropharyngeal malignancy; however, wider adoption of robotic techniques by ENT/H&N surgeons has been more limited in other anatomical subsites.

Robotic-assisted surgery promises three-dimensional optics, tremor filtration and highly dextrous instruments with motion scaling and greater ranges of motion than the human hand. These attributes are highly advantageous to all surgeons and yet uptake of robotic techniques in the head and neck are largely limited to the oropharynx. This can primarily be explained due to anatomical constraints of the head and neck and the design features of current robotic platforms.

Since its inception, robotic-assisted surgery has been dominated by a single family of robotic platforms. The da Vinci robotic systems (Intuitive, Sunnyvale, California) were primarily designed to operate within the visceral cavities of the abdomen and thorax. The multi-arm design passes instruments through laparoscopic ports several centimetres apart and triangulates into the target area. Within the head and neck this multiport approach is less effective. The upper aerodigestive tract broadly resembles a funnel. The oral aperture forms the opening and the subglottis the apex. All three robotic arms must pass through the oral aperture, limiting the distance between each robotic arm. As the instruments pass distally down the upper aerodigestive tract, it narrows as it funnels towards the larynx. This limits the working space and reduces triangulation angles of the robotic arms surgical field congestion, instrument classes and inadequate access. This phenomenon is termed the ‘funnel effect’ and is a major limitation to robotic access in TORS. Current robotic systems perform effectively within the wider upper portion, the oropharynx and supraglottis; however, performance suffers in more distal subsites. 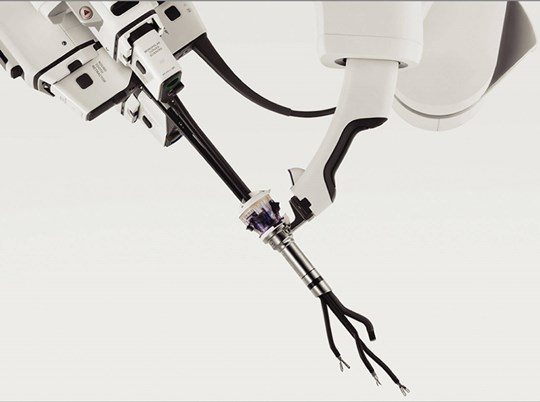 Traditional monopolar and bipolar electrocautery currently integrated with the da Vinci systems are effective but antiquated tools compared to the advanced robots equipped with them. High thermal spread, charring and limited size of vessels that can effectively be controlled are all significant limitations. The integration of advanced energy devices is an ongoing area of development within the robotic field [2]. Some offer flexible laser fibre integration, and advanced bipolar, ultrasonic or hybrid bipolar ultrasonic devices may be offered in the future. This may enable safer resections, improved postoperative pain and precise surgical margin analysis.

The da Vinci SP is the latest iteration from Intuitive, which offers a three instrument arms and a high-definition 3D endoscope delivered through a 2.5cm diameter single port. Within TORS, this offers enhanced transoral access and three-handed operating, enhancing traction and counter traction. The da Vinci SP has undergone clinical trials with oropharyngeal malignancy with favourable results [3].

CMR Surgical (Cambridge, UK) has developed and CE marked the Versius Robotic Platform. This system offers a multiport design with the advantages of a smaller bedside footprint, open console to enhance communication, and individually portable arms. The Versius platform has been evaluated preclinically for use in TORS as well as for use in expanded robotic applications within the head and neck including nasopharyngeal, skull base and periorbital applications [4]. 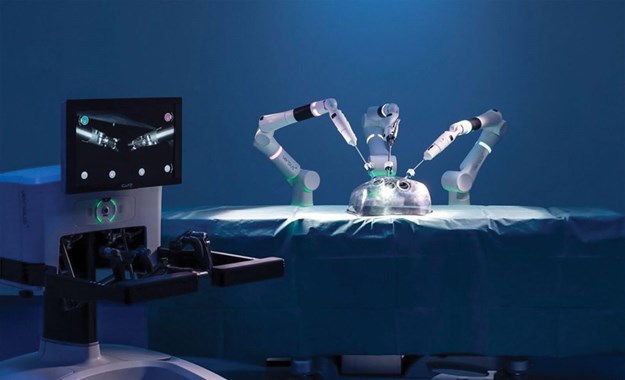 The da Vinci SP (Intuitive) and Versius (CMR Surgical) both offer exciting prospects for expanding the role of robotics within head and neck surgery. All three systems are either commercially available or have undergone preclinical testing and optimisation within the head and neck. Several other robotic platforms are in earlier stages of development and the role within head and neck surgery remains to be determined. Titan Medical and the Enos system is a single-port device that has undergone preclinical testing within the abdomen and may play a role in transoral surgery. The pharmaceutical giant Johnson & Johnson’s Ottava surgical system is one of the most highly-anticipated surgical devices. Development began as a joint venture with Google and exact details are yet to be released, however the system is said to have miniaturised surgical technology to 20% of existing size and attach directly to the patient bed, removing any floor footprint and enhancing beside access. If or how this system will influence head and neck surgery remains unclear; however, miniaturised devices with advanced capabilities will certainly be of benefit to head and neck applications.

Robotic surgery has become well established in the treatment of head and neck malignancy. Its role is well defined within the oropharynx and the next generation robotic systems, and advanced surgical technology offers enhanced surgical access to current and novel anatomical sites, improved energy delivery and an expanded role for robotics within head and neck surgery.

Declaration of Competing Interests: JF has received funding for academic research from CMR Surgical, the manufacturer of ‘Versius’. 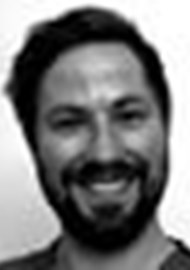