Among the many hundreds of children presenting to the otolaryngology clinic are a few whose symptoms are due to an underlying genetic condition. In most cases the underlying syndrome is obvious and has already been diagnosed, such as the child with Down syndrome. There are some syndromes, however, whose features may be more subtle and easily missed.

For some, the first presenting features may be in the ears, nose or throat and the otolaryngologist may be the first doctor to see the child and, therefore, the first to have the opportunity to spot the underlying diagnosis. This is an important opportunity to make potentially a huge difference to the child and family as making the correct diagnosis can affect not only the management of the otolaryngological condition but also many other body systems.

It is important that the ENT surgeon has knowledge of some of the less common genetic disorders in order that appropriate and timely referral for specialist management can be made. This article will serve to highlight some of the conditions that may first be diagnosed by the ENT surgeon, with the main focus being on recurrent acute otitis media as the presentation. Of course, ear infections are extremely common in children. About half of all children have had an episode of acute otitis media before their first birthday increasing to 80% by their third birthday [1].

Most are managed in the community without seeing an otolaryngologist. In the UK, specialist referral is usually only requested for those with recurrent episodes of infection. During the consultation, the question inevitably arises as to whether the repeated infections are due to some underlying cause. Parents very often suspect some kind of systemic immune problem and for most the answer is ‘no’. However, the otolaryngologist should be aware that among these many children with ear infections are a small number with specific syndromes that might not yet have been diagnosed. 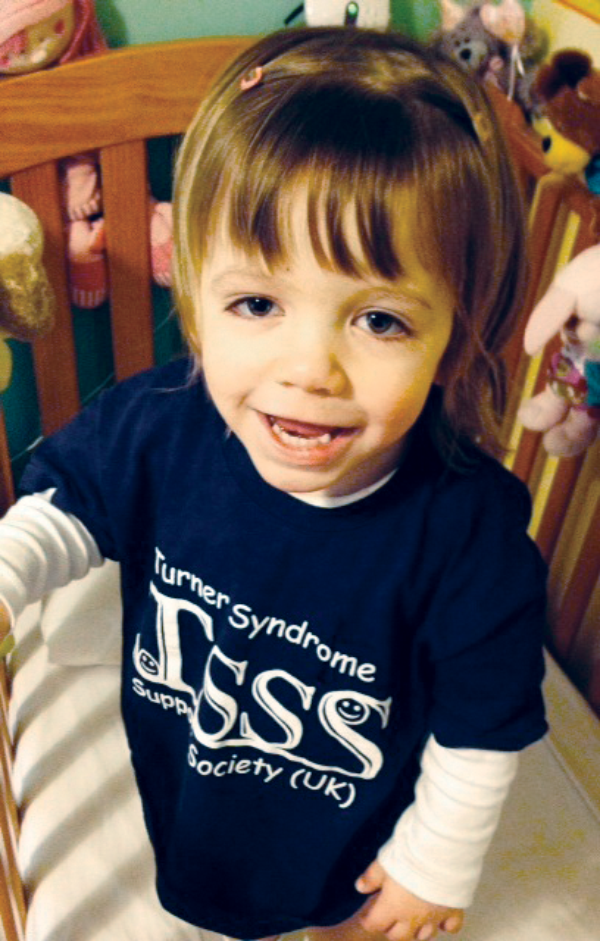 It would be very easy to miss the diagnosis of Turner Syndrome
in this girl (although the TS Society t-shirt is a clue!).

Turner syndrome (TS) is characterised by the complete or partial loss of one X chromosome. TS is surprisingly common, affecting 1 in 2000 females, although perhaps only half have actually been formally diagnosed and are known to medical services. Some are diagnosed at birth due to characteristic features such as oedematous feet, while others are diagnosed in adolescence due to growth failure and delayed puberty [2]. The vast majority of girls with TS present to otolaryngologists in their early years with recurrent acute otitis media (AOM) and otitis media with effusion (OME), and for many this occurs long before the diagnosis of TS has been made. Progressive mid-to-high tone sensorineural hearing loss is common in school years and early adulthood.

Cholesteatoma is also not infrequent [3]. Early diagnosis can make a huge difference to these patients as it enables the detection of heart anomalies, which are commonly present, as well as growth hormone treatment for short stature. Suspicion is key. A number of characteristic features are listed in Table 1 but the crucial thing is to consider TS in any girl with ear problems and short stature, and refer on to an endocrinologist if concerned. If she is the shortest girl in her school class, think, ‘could this be Turner syndrome?’ 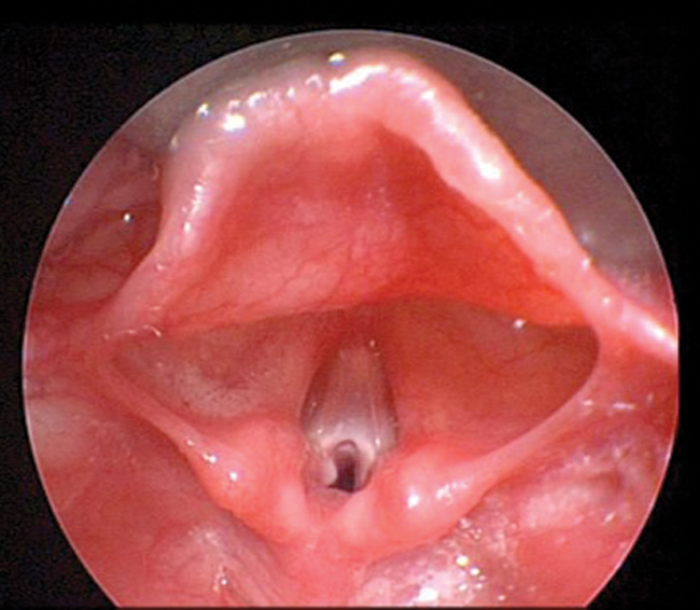 Figure 1: Glottic web in a child with 22q11 deletion syndrome.

22q11 deletion syndrome encompasses the clinical conditions previously termed velo-cardio-facial syndrome and Di George syndrome which are now known to be different manifestations of the same genetic defect. A variety of clinical features can occur but not in every child. Common features include submucous cleft palate, congenital heart anomalies, absent thymus with impairment of T-cell immunity (Di George sequence) and characteristic facial features. The ENT clinical features result from abnormal development of structures derived from the third and fourth pharyngeal pouches.

The first presentation to medical services may well be with recurrent episodes of AOM due to the impaired T-cell immunity [4]. Another presentation to the otolaryngologist is with a congenital glottic web which is almost always diagnostic of 22q11 deletion [5-7]. Again, the phenotypic profile is highly variable and awareness and suspicion are key, but common features are listed in Table 2. If there is suspicion of 22q11, full ENT assessment including laryngoscopy should be performed and referral to a geneticist and cardiologist initiated. 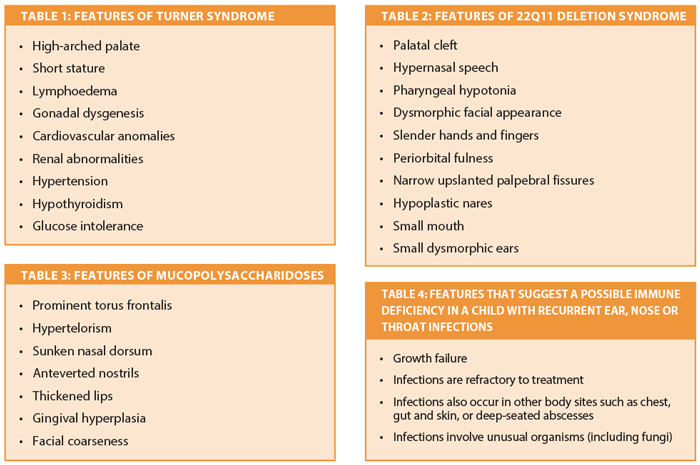 The mucopolysaccharidoses (MPS) comprise a group of conditions that result from the deficiency of lysosomal enzymes causing the accumulation of glycosaminoglycans in tissues. Head and neck structures are frequently involved early and the otolaryngologist may see children before the onset of systemic disease [8]. Features commonly include recurrent otitis media, mixed hearing loss, upper airway obstruction +/− obstructive sleep apnoea and coarse facial features as detailed in Table 3. Due to the non-specific clinical features, diagnosis is frequently delayed but early diagnosis is essential, particularly in Hunter syndrome, where enzyme replacement therapy is now available [9]. MPS is also associated with intubation difficulties and may pose a significant anaesthetic risk [10]. OSA is extremely common, with a prevalence of up to 90%, and patients may benefit from adenotonsillectomy [10]. Suspicion of MPS should prompt specialist referral and confirmation is with urinary glycosaminoglycan measurement and enzyme assays [8].

“Early diagnosis can make a huge difference to children with an underlying syndrome and otolaryngologists are often the first doctors to see them.”

Otolaryngologic presentations are common in patients with an underlying primary immunodeficiency disorder (PID). PID encompasses a number of conditions where a part of the immune system is impaired due to an intrinsic genetic defect. Common head and neck presentations include rhinosinusitis, otitis media and cervical adenopathy [11]. Of course, the majority of patients will not have an underlying disorder but such a diagnosis should be considered in the presence of growth failure and other unusual features, as outlined in Table 4. PID diagnosis is often made late but early diagnosis is critical as specialist antibiotic regimes, sometimes long term, and treatment with immunoglobulins may be necessary. Where PID is suspected total immunoglobulins, immunoglobulin subclasses and complement assays should be requested and referral to an immunologist considered.

Primary ciliary dyskinesia Primary ciliary dyskinesia (PCD) is an autosomal recessive disorder that results in the impaired function of motile cilia and therefore poor mucociliary clearance. Its four main features are chronic lung disease, chronic rhinosinusitis, hearing impairment and subfertility. A further feature in 50% is situs invertus where it is known as Kartagener syndrome [12]. Diagnosis is often delayed with mean age at diagnosis almost nine years in one study [12]. Early diagnosis and treatment can limit the development of chronic, irreversible lung damage. Suspicion should prompt referral to a respiratory physician. Diagnostic tests are expensive and complex, and include electron and video microscopy of nasal mucosal brushings. PCD should be managed by a multidisciplinary team in a specialist centre and thus early identification and referral is imperative [13].

A final condition that may first be diagnosed by the ENT surgeon is an autistic spectrum disorder (ASD). Children with delayed speech often present at clinic for hearing assessment. Otolaryngologists should be aware of the early signs of autism in order that the diagnosis of ASD is not missed. A normal hearing test does not necessarily mean that all is well: if the child’s behaviour suggests ASD, then referral to a developmental paediatrician would be appropriate, giving the otolaryngologist the opportunity to facilitate early diagnosis for the family [14]. Conclusion Genetic conditions are complex and rare, but there are a small number that the otolaryngologist should be aware of. For some genetic disorders, early diagnosis can make a big difference to the child and family, and the otolaryngologist may be the first doctor to see the child. We hope this article may serve to highlight some of the more occult genetic disorders that can present with an ENT problem, and help the ENT surgeon in making an early diagnosis. 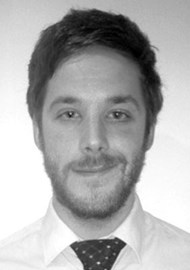 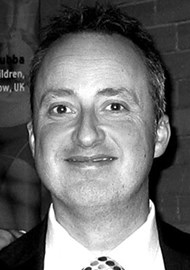