In most cases there are four glands however they may number from two to six [2] and whilst the superior glands are usually constantly located, the inferior ones may lie anywhere from the high neck to the aortic arch. Awareness of the embryological derivation aids location of ectopic glands – since the branchial pouches originate from the level of the carotid bifurcation, adenomas may be found as craniad as the parapharyngeal or carotid spaces and as the inferior glands migrate caudad with the thymus they may be found within the mediastinum, and may lie within thyroid or thymic tissue [1].

Hyperparathyroidism may be primary (unregulated hyperproduction of PTH with no identified stimulus), secondary (overproduction of PTH secondary to chronic abnormal stimulus such as renal failure or vitamin D deficiency) or tertiary (usually describing secondary hyperparathyroidism persisting despite successful renal transplantation and characterised by gland hyperplasia). Primary hyperparathyroidism may be due to adenoma of a single gland (75-85%), two glands (2-12%), three glands (<1-2%), four or more glands (<1-15%) with parathyroid carcinoma occurring rarely (1%) [3]. It is worth noting that there is a higher incidence of parathyroid hyperplasia (four gland disease) in multicrine endocrine neoplasia and that it is not possible to differentiate between adenoma and hyperplasia histologically if a single gland is submitted for pathology.

The main role of imaging in parathyroid hyperfunction is to localise the abnormal gland, or glands, in order to guide surgical approach. Prior to 2000 the standard management of primary hyperparathyroidism was exploration of all four glands through a transverse incision with extensive soft tissue dissection [4] and attendant risk of both damage to the recurrent laryngeal nerve and / or hypoparathyroidism. This approach required little, if anything, in the way of preoperative imaging as the operative success rate was high. From the late 1990s more focused surgery developed with the use of a small unilateral incision to target a single gland combined with intraoperative serum PTH assay to determine successful excision [5]. Advantages of this approach include better cosmesis, lower surgical risk and shorter surgery. This, however, necessitates precise localisation of the abnormal gland(s) and therefore routine preoperative imaging [3]. 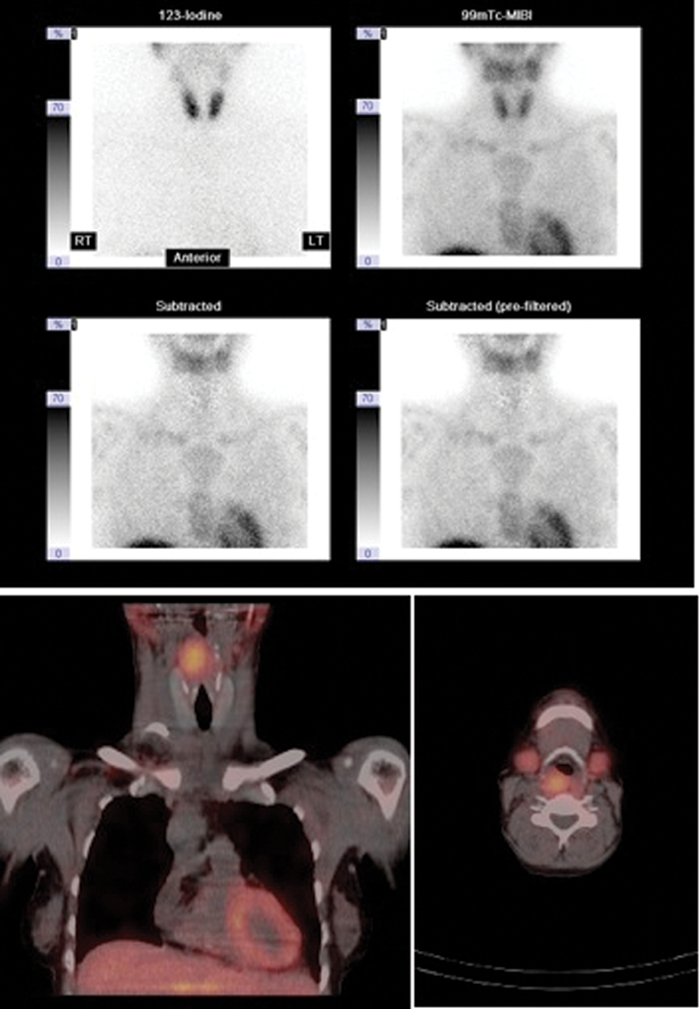 Functional imaging with scintigraphy demonstrates gland hyperfunction and can identify single or multigland disease. Imaging is hampered by relatively poor spatial resolution although single-photon emission computed tomography (SPECT) may be used to aid localisation (Figure 1). Scintigraphic techniques involve either subtraction or differential washout techniques. In the former, images demonstrating thyroid alone are subtracted from images demonstrating thyroid and parathyroid together to identify abnormal parathyroid tissue. Early subtraction techniques generated an image using thallium 201 (which is taken up by both thyroid and abnormal parathyroid tissue) and subtracted an image obtained using 99mtechnetium-pertechnate (99mTc-pertechnate) which is selectively taken up by thyroid (and salivary) glands. Literature reports demonstration of 72% of primary parathyroid adenomas but only 43% secondary adenomas using this technique [6].

However, relatively long imaging times of up to 20 minutes are required which may result in movement artifacts. More recently, 99mTc-sestamibi has been used in functional parathyroid imaging (Figure 2). This is taken up by both thyroid and by abnormal parathyroid tissue, and the radiopharmaceutical may be used for either subtraction or differential washout techniques with reported sensitivities of 88% for solitary adenomas [6]. Sestamibi subtraction imaging is used in conjunction with either 99mTc-pertechnetate or 123iodine to identify the thyroid gland. Washout methods utilise the differential clearance rate of sestamibi from thyroid and parathyroid tissue – washout from the thyroid is rapid compared to delayed washout in abnormal parathyroid tissue. The technique is simple, relatively quick and only uses one tracer but small or rapidly clearing adenomas may be missed [6]. 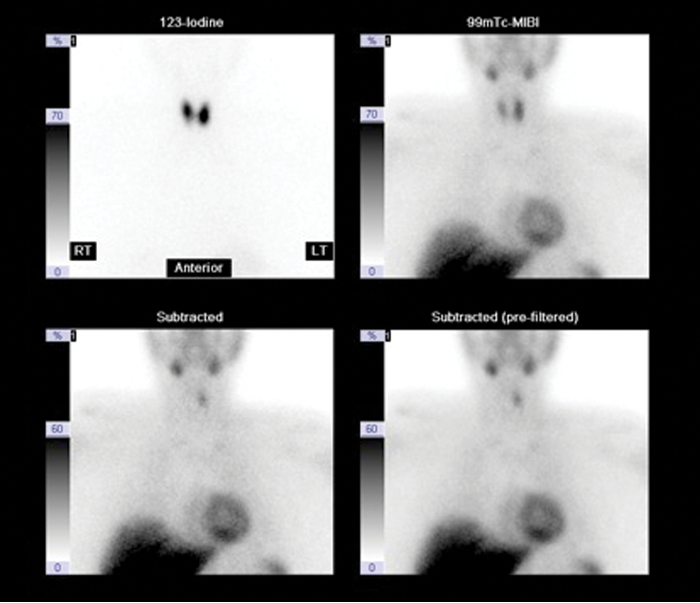 Figure 2: Dual Isotope 123I 99mTc MIBI Scan demonstrating activity on the subtraction images in the left neck consistent with adenoma.

Ultrasound (US) has excellent spatial resolution and is radiation free but is highly operator dependent and as such has a wide range of reported sensitivities and specificities [7]. The typical appearance is of a homogenously hypoechoic well defined mass which has prominent vascular supply on Doppler interrogation (Figure 3). Whilst the technique is useful for assessment of adenomas in expected areas, lesions in the tracheoesophageal groove, retro-oesophageal region, mediastinum or lesions within the thyroid are particularly difficult to assess. In order to maximise lesion identification US is often combined with scintigraphy either using both in the first instance or reserving the latter for patients with a negative ultrasound [8]. 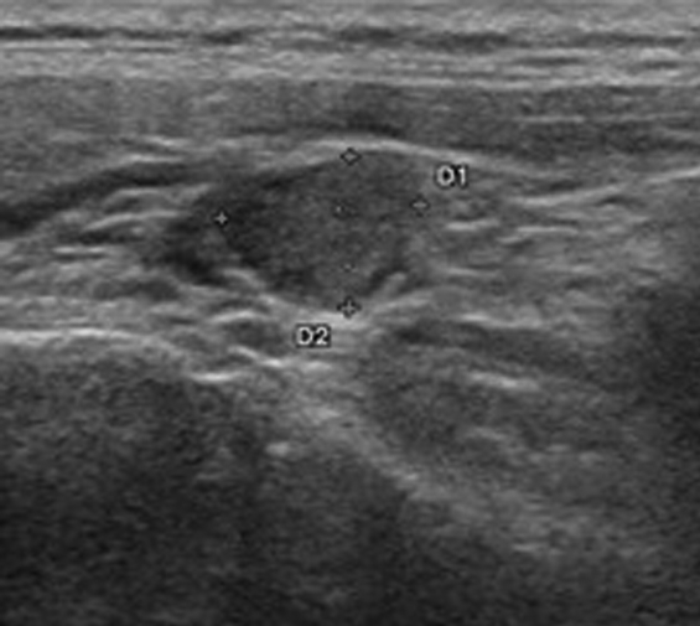 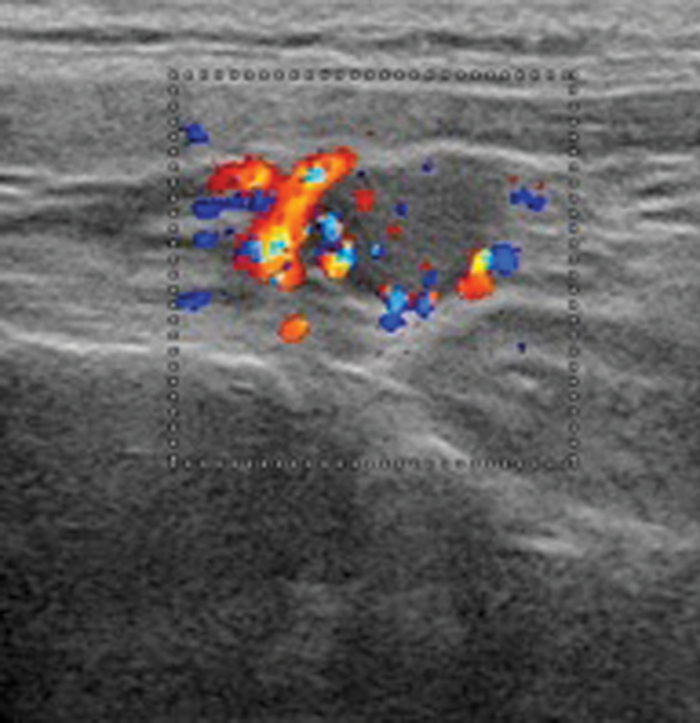 Figure 3: Ultrasound demonstrating a well defined hypoechoic lesion (top) with a prominent vascular supply on the Doppler images (bottom) consistent with an adenoma.

Magnetic resonance imaging (MRI), also radiation free, does not usually resolve normal parathyroid glands. Adenomas are seen as masses of low signal intensity on T1 images and high signal on T2 images with increased conspicuity following both fat suppressed imaging with short tau-wave inversion recovery imaging (STIR) and with gadolinium contrast administration (Figure 4) [6, 7], unfortunately the MRI appearance of adenomas varies according to their composition, they can be difficult to differentiate from lymph nodes and the reported sensitivity rate for localisation of parathyroid lesions with MRI is lower than SPECT scintigraph [7]. It also is worth noting that in the UK waiting times for MRI examination are prolonged relative to other imaging modalities and that the technique is not suitable for claustrophobic patients and as such MRI is not routinely used in the assessment of hyperparathyroidism. 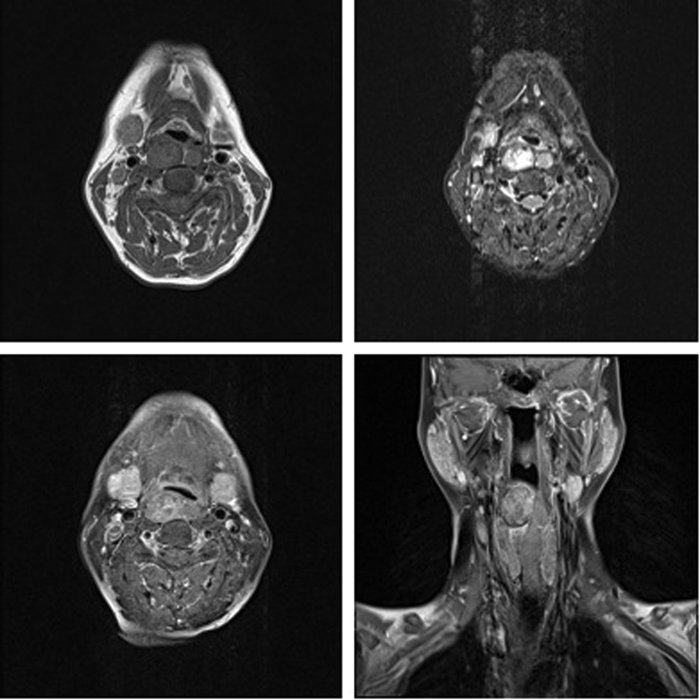 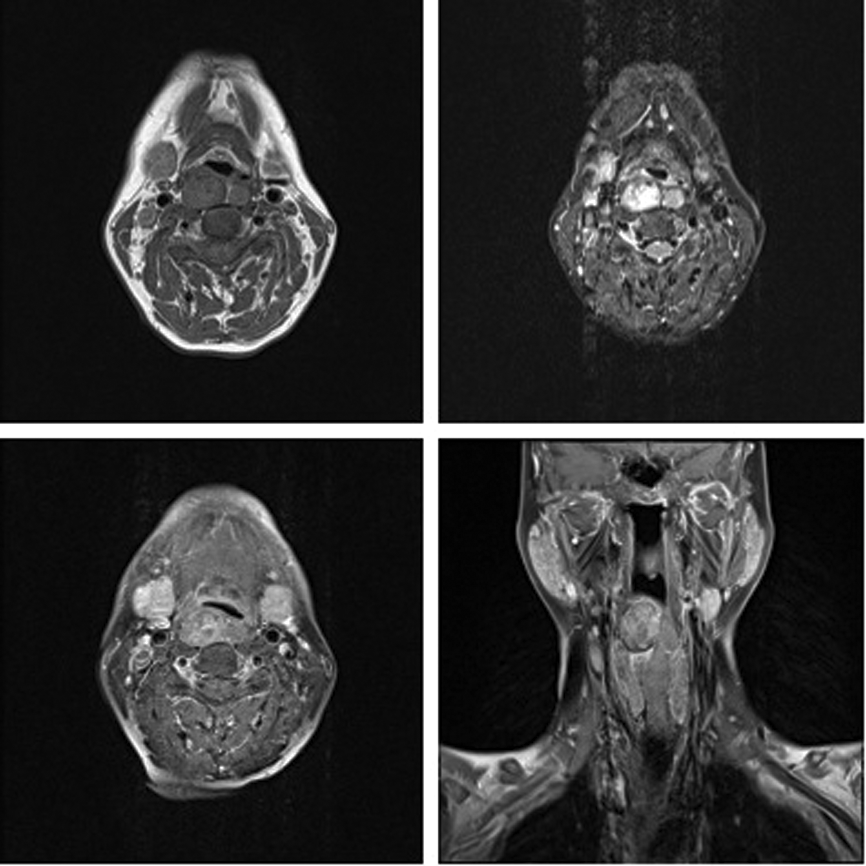 Contrast enhanced computed tomography (CT) has had relatively low success in the identification of parathyroid disease in both the virgin and the postoperative neck. In 2006 Rodgers et al. formally described the excitingly named 4D parathyroid CT technique [9] – they may well have been inspired by Disreli’s observation that ‘time is the greatest physician’ with their application of time as a fourth dimension to the x, y and z (axial, coronal and sagittal) of standard multiplanar CT image acquisition. Images are acquired in unenhanced, arterial and delayed phases to localise and characterise lesions by their enhancement pattern following intravenous contrast administration.

The parathyroid adenoma classically enhances vividly in the arterial phase with rapid subsequent washout (Figure 5). Furthermore, feeding vessels identified on the arterial images allow increased confidence in identification of adenomas [10]. Unenhanced images allow differentiation between parathyroid tissue and thyroid with the latter demonstrating higher density due to intrinsic iodine. As a first line investigation, 4D CT is highly accurate in adenoma location (87%) [10] and Rodgers et al. reported sensitivity of 70% in quadrant localisation versus 33% for sestamibi imaging and 29% for US [9].

The technique has also proved to be particularly useful in patients with prior neck intervention due to its high sensitivity. There is a significant radiation burden inherent in multiple acquisitions across the neck, however the risk of thyroid cancer from 4D CT only exceeds the current thyroid cancer incidence when the patient is a female under 30 or a male under 20 [10]. Whilst some centres do advocate 4D CT as a first line investigation it would seem that in the younger age group at least, it should be reserved for difficult patients and is of particular value in those with prior surgery. 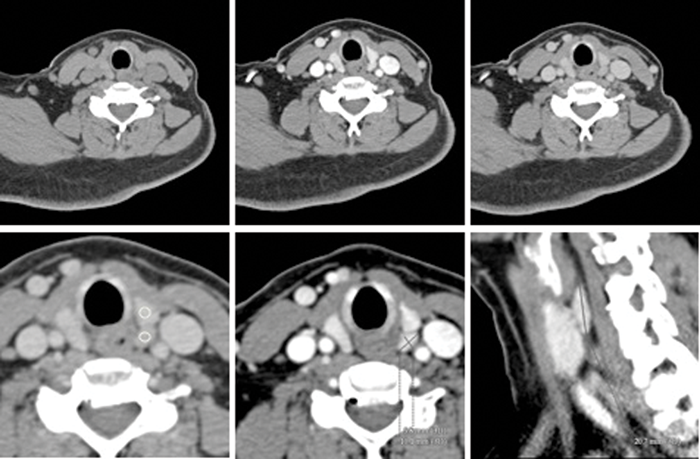 Figure 5: 4D CT of the same patient as Figure 2. Non contrast image (top left) shows a lesion posterior to the left lobe of the thyroid which enhances avidly following contrast administration in the arterial phase (top middle) and shows rapid washout on delayed images (top right). Region of interest markers may be used on the delayed images (bottom left) to demonstrate more rapid contrast clearance in the lesion to measure the Hounsfield density in the lesion (100 HU) compared to the thyroid (130 HU). Axial and Sagittal reformats (bottom middle and right) demonstrate the size of the adenoma.

As discussed, the parathyroid glands can be imaged either anatomically or functionally, although a combination of the two approaches is more common. Of particular difficultly for the imager is the postoperative neck – in such patients the anatomy is non-standard and it can be difficult to differentiate post surgical appearances with pathology. It is also worth noting that adenomas may lie within the thyroid gland, the thymus and may undergo cystic or degenerative change with attendant effect on imaging appearance introducing further difficulty for the radiologist and further supporting the case for combining two modalities in the assessment of hyperparathyroidism. 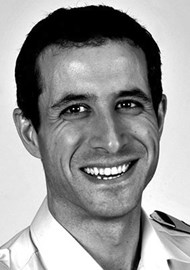