Tinnitus is a common sensation with a reported prevalence of 7-32%. The British National Study of Hearing recorded that 10% of adults suffered from prolong spontaneous tinnitus, and approximately a quarter of these are subsequently referred to hospital for investigation [1]. Such patients are evaluated for predisposing factors (e.g. ototoxic drugs, depression, endocrine disease and noise exposure) and undergo detailed neuro-otological examination.

A proportion of these also undergo imaging investigations in order to provide an explanation for the tinnitus or to detect dangerous and treatable causes. In order to guide the requirement and the approach to imaging these patients, it is necessary for the tinnitus to be classified as either continuous (non pulsatile) or pulsatile.

Non pulsatile tinnitus is far more frequent, and represents approximately 96% of cases. Unilateral non pulsatile tinnitus may result from a cerebello-pontine angle (CPA) cistern or internal auditory meatus (IAM) mass lesion, so these patients usually undergo imaging investigations. It is speculated that vestibular schwannomas, and other lesions, may result in tinnitus by compression of the cochlear nerve fibres or inferior vestibular nerve efferent fibres, arterial compression, or cortical reorganisation secondary to hearing loss [2]. It is reported that up to 13% of vestibular schwannoma patients may present with unilateral tinnitus but normal hearing. Although it is not universally accepted, there are published protocols indicating that unilateral tinnitus (even with normal audiometric testing) should be imaged [3, 4].

The presence of additional asymmetric or unilateral sensorineural hearing loss should certainly prompt investigation for a CPA or IAM mass lesion (Figure 1). The degree of asymmetry in hearing thresholds required to trigger imaging has been much studied, and 15-20 dB difference (either over a range or at specific or averaged frequencies) is generally proposed for the best compromise of sensitivity in screening rates [5, 6]. 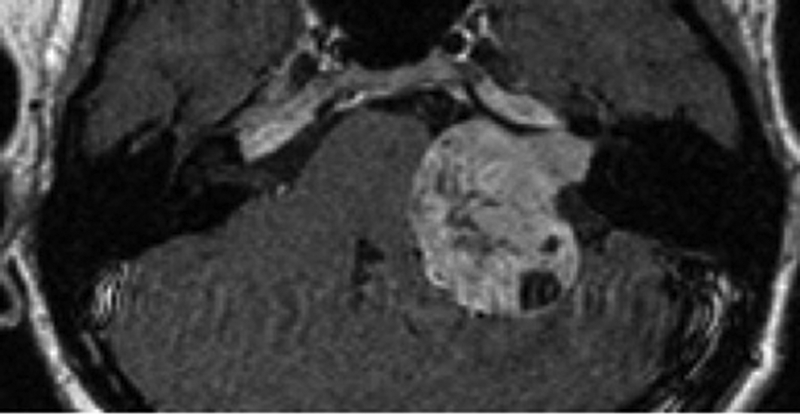 The standard imaging investigation used for unilateral non pulsatile tinnitus is with thin section T2-w MRI. This is variably supplemented with whole brain T2-w imaging in order to assess the higher auditory pathways. Different thin section T2-w gradient echo (e.g. FISP / CISS or FIESTA-C) or spin echo (e.g. DRIVE, SPACE) sequences are used depending on the MRI manufacturer. They aim to delineate the eighth cranial nerves within the surrounding high signal cerebrospinal fluid (CSF). Standard sequences (particularly at 3 Tesla) are now able to produce ‘isotropic’ imaging data which may be reformatted in any plane without loss of spatial resolution. Minor irregularity of the nerves due to adjacent vascular loops or normal variation in the neural calibre (e.g. due to Scarpa’s ganglion) should not be misconstrued as tumour. Additional T1-w post gadolinium (ideally thin section volumetric) sequences should be used to help clarify equivocal cases and characterise any abnormality. Increased MRI availability, patient expectation and concerns regarding litigation have led to an ever increasing number of patients undergoing MRI for audio-vestibular symptoms and it has been estimated that up to 20% of new ENT referrals may be appropriate for such investigation [7].

There is little data concerning the diagnostic yield of imaging patients with unilateral or asymmetric continuous tinnitus. Studies of patients undergoing MRI for the range of audio-vestibular complaints over the past 15 years have demonstrated lesions in 1.4-9.2% of cases. Our data indicated vestibular schwannoma to be present on MRI in 1.7% of patients presenting with isolated unilateral tinnitus [8]. It should be noted that there are other intracranial pathologies (e.g. Chiari malformation, brain stem vascular or inflammatory disease) which may result in continuous tinnitus, however this is rarely the primary complaint, and it is usually the other neurological features which will prompt imaging investigation.

Although pulsatile tinnitus is much less common, the radiological examination and diagnostic considerations are more complex. Imaging is targeted at the diagnosis of a range of congenital vascular anomalies, vascular (arterial and venous) stenoses, vascular tumours and vascular malformations [9].

There are some key clinical features which impact on the choice of imaging protocol and help the radiologist determine the significance of the various imaging findings. Firstly, the presence of objective (perceptible to another person) pulsatile tinnitus is important, as this indicates a high likelihood of a structural abnormality, and the need of exhaustive imaging investigation. Secondly, it should be established whether there is any visible mass at otoscopy. This indicates a limited differential diagnosis of middle vascular tumour [most frequently a glomus (jugulo) tympanicum], or a vascular variant, such as dehiscent jugular bulb or aberrant carotid artery. These entities may be distinguished with a standard dedicated CT temporal bone study, although additional imaging will be required in the case of a glomus tumor. Finally, in the absence of any otoscopic abnormality, there should be an attempt to categorise the pulsatile tinnitus as either arterial or venous. Whilst both entities will be imaged using similar protocols, the recording of arterial or venous tinnitus will help the radiologists focus on likely sites of pathology and understand the clinical significance of the imaging features.

Patients with pulsatile tinnitus and no otoscopic abnormality, may be imaged with either CT or MRI based protocols. The studies should be specifically directed at the likely vascular pathologies, and each imaging department should have a ‘pulsatile tinnitus protocol’ in place. CT studies should be enhanced with a contrast bolus timed to opacify both arterial and venous compartments (combined CTA / CTV), with the coverage extending from the carotid bifurcation inferiorly to the vertex superiorly. MRI studies should include gadolinium enhanced thin section sequences through the skull base, together with MR arterial (MRA) and MR venous (MRV) sequences. In patients with arterial tinnitus, these MRI or CT based protocols should be systematically analysed for the principle differential diagnoses of vascular malformations (in particular dural arterio-venous fistulae), arteriopathies and vascular neoplasms (Figure 2).

CT also has the ability to demonstrate less likely aetiologies such as Paget’s disease, otosclerosis and semicircular canal dehiscence, whereas MRI may disclose the potential (although controversial) relationship with intrameatal vascular loops [10]. It has been traditional for patients with objective arterial tinnitus, and negative MRI / MRA or CTA / CTV studies, to undergo conventional (catheter) cerebral angiogram in order to completely exclude an arteriovenous fistula [11]. However with improved imaging technology, such diagnostic algorithms are now being challenged. In our experience, patients with isolated pulsatile tinnitus and dural arteriovenous fistulae, do demonstrate abnormalities on MRI / MRA, although the imaging signs may be subtle.

Furthermore, the development of time-resolved MRA studies (Figure 2), which repeatedly capture data over time in order to depict vascular dynamics, will also improve the non invasive assessment of intracranial arterial venous shunting [12]. In patients with venous tinnitus, the primary diagnostic considerations are of idiopathic intracranial hypertension and venous variants. Severe bilateral transverse sinus stenoses, as demonstrated on the MRV / CTV studies, are highly suggestive of idiopathic intracranial hypertension and should prompt neuro-ophthalmology referral. There are also various skull base venous anatomical variants such as high riding jugular bulbs, jugular bulb diverticula, large emissary veins and lateralised sigmoid sinuses, which have been associated with venous pulsatile tinnitus. However these variants are common and it is frequently difficult to determine a direct causal relationship. 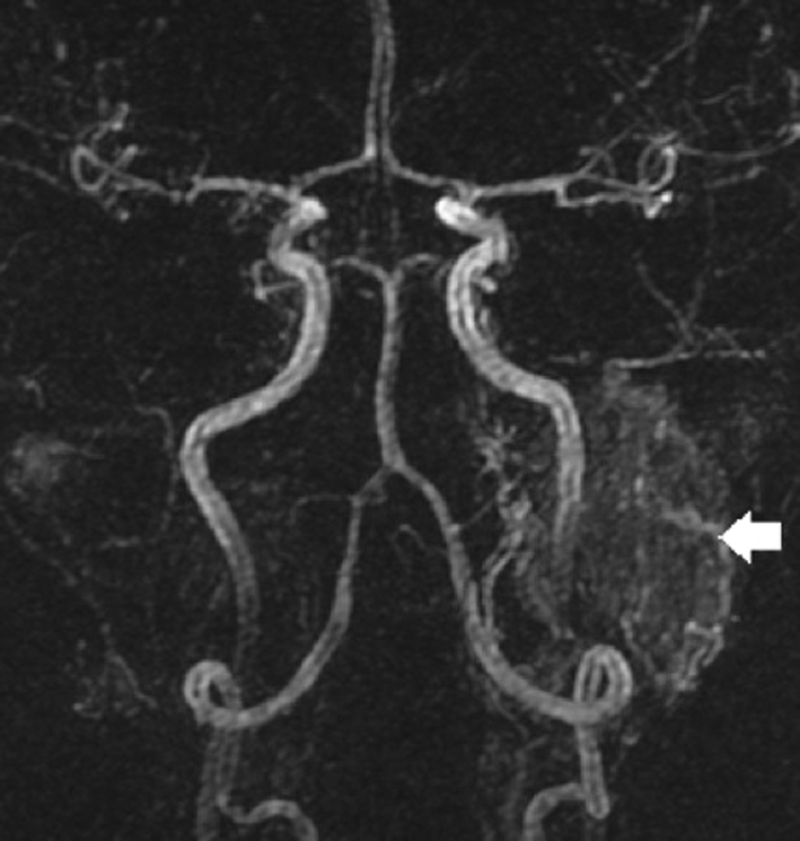 Previous studies using an array of differing imaging modalities have shown high rates (44-91%) of structural correlates in patients with pulsatile tinnitus, with the principle diagnoses being atheromatous disease, venous variants, idiopathic intracranial hypertension, glomus tumours and dural arterio-venous fistulae. Despite dedicated imaging protocols and a rigorous search for potential aetiologies, our rates of positive findings are only 5-10% (depending upon whether venous variants are recorded). This reduced diagnostic yield has also been observed in other centres, and may reflect contemporary referral patterns with an increased proportion of patients being imaged with subjective pulsatile tinnitus.

In conclusion, careful clinical evaluation and classification of tinnitus is vital for the guiding of imaging protocols and analysis of imaging studies. Unilateral non pulsatile tinnitus and pulsatile tinnitus should be imaged in order to detect significant and treatable lesions, although the diagnostic yields are low. 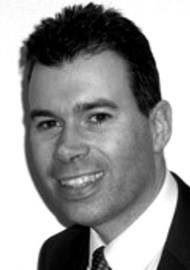