Can bespoke cochlear implant programming strategies reduce the variability seen in patient performance with an implant? Bob Carlyon reviews the current situation and gives us a glimpse of the future.

Although many cochlear implant (CI) patients understand speech well in quiet situations, even the most successful struggle in noisy situations (the ‘cocktail party problem’). Furthermore, their very poor pitch perception not only impairs the enjoyment of music but also prevents them from using pitch differences to separate competing voices.

Attempts to improve CI hearing have addressed multiple parts of the processing chain, from improvements in microphone design and in noise-reduction algorithms to biological interventions that aim to preserve or restore auditory-nerve function. In this article I will focus on the middle part of the chain, and on interventions that can be applied in the short- or medium-term using existing technology.

Multi-channel implants are vastly superior to their single-channel predecessors, and performance on speech perception tasks deteriorates as the number of electrode channels used drops below about eight. It is therefore clearly important that each electrode excites a restricted range of auditory nerve fibres, distinct from that excited by its neighbour. All makes of CI in use today deliver current to the auditory nerve using so-called monopolar (MP) stimulation. This involves injecting current into one intra-cochlear electrode at a time, and returning it via an electrode outside the cochlea (Figure 1 - MP). 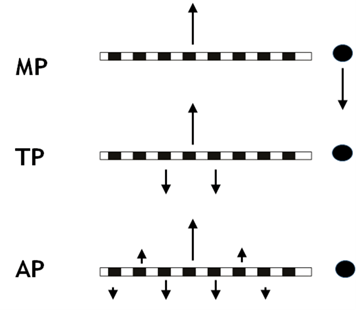 Figure 1. Schematic illustration of monopolar (MP), tripolar (TP), and all-polar (AP) stimulation methods. In MP stimulation current flows into the cochlea in one direction (arbitrarily illustrated as upwards here) and is returned via an extra-cochlear electrode. More-focussed current spread can be achieved by returning current via 2 (TP) or more (AP) electrodes. It should be remembered that current flowing to or from all of the stimulated electrodes may stimulate the auditory nerve. AP stimulation is sometimes known as ‘phased array’.

MP stimulation is known to produce a broad current spread, so that each intra-cochlear electrode will stimulate neurons close to many other electrodes. In principle, it is possible to produce a more focussed current spread by returning part or all of the current via one or more intra-cochlear electrodes (Figure 1 MP, TP and AP). These focussed-stimulation methods have indeed been shown to produce a more restricted neural spread of excitation, when measured using physiological techniques in cats and guinea pigs. Unfortunately, both psychophysical measures and speech perception experiments with human CI listeners have revealed only modest and variable benefits.

The reasons for this discrepancy remain unclear. One interesting possibility, suggested by computational models, is that the benefit of focussed stimulation is reduced when many of the auditory neurons have died – this is more likely to be so in human CI patients, who have often been deaf for a long time prior to implantation, than for the acutely deafened animals used in physiological studies. Other possible reasons include the different size of the human and animal cochlea, and differences in the length, orientation and myelination of human versus animal auditory nerves. Understanding the reasons for the across-species differences in the success of focussed stimulation will be important for new developments that could deliver effectively focussed stimulation for human CI patients.

Contemporary CI processing strategies are variants on one of two basic methods. One of these, known as continuous interleaved sampling (CIS), is illustrated in Figure 2a. Sound is analysed using a bank of bandpass filters (usually implemented via Fast Fourier Transform (FFT)). The output of each filter amplitude modulates a ‘carrier’ pulse train, and the modulated pulse train is then presented to one electrode. The output of higher-frequency filters are presented to more basal electrodes, roughly mimicking the tonotopic organisation of the normal auditory system. 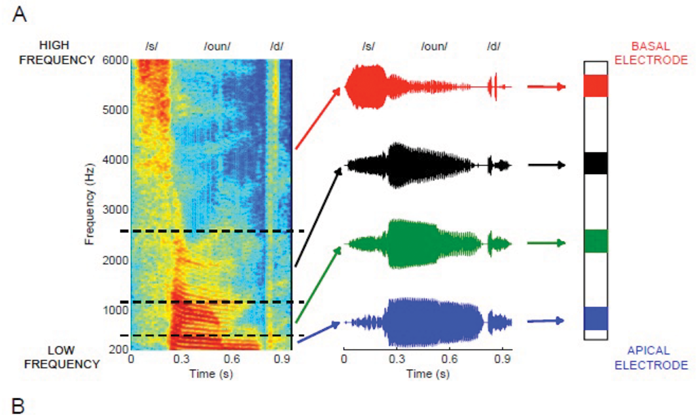 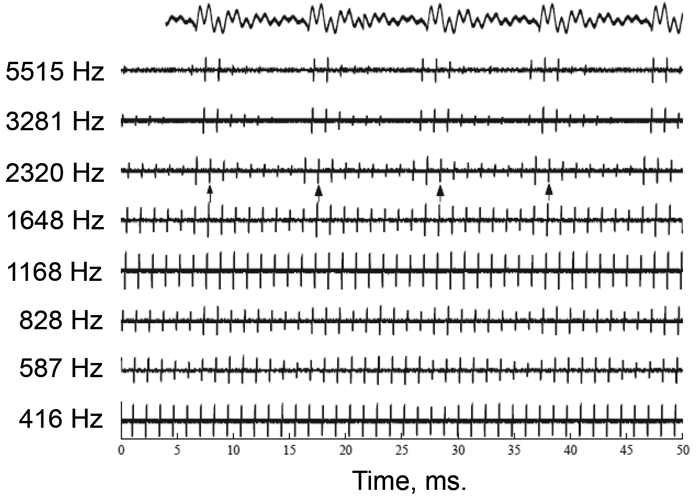 Figure 2. A) Schematic of a four-channel CIS strategy in response to the word “sound”. B) Output of an eight-channel CIS strategy, measured using a test implant and digital storage oscilloscope, in response to the vowel /a/. The vowel waveform is shown at the top of the plot and has an F0 of 100 Hz. Arrows under the channel centred on 2320 Hz show peaks in the output envelope that reflect the periodicity of the input sound. [Part A) originally published in Macherey O, Carlyon RP. Cochlear implants. Current Biology 2014;24:R878-84. Part B) adapted from in Moore BCJ, Carlyon RP. Perception of pitch by people with cochlear hearing loss and by cochlear implant users. In: Plack CJ, Oxenham AJ, (Eds.), Fay RR, Popper AN, (Series Eds.). Springer Handbook of Auditory Research: Pitch Perception. New York, NY, USA; Springer; 2005.]

Pulses are interleaved across the different electrodes, so that no two electrodes are stimulated simultaneously. In so-called n-of-m strategies, such as ACE (Cochlear Ltd., Sydney, NSW, Australia), only a subset of electrodes – corresponding to the highest-amplitude filter outputs – are presented in each short time frame (roughly 20ms). Neither CIS nor ACE are good at conveying information on the fundamental frequency (F0) of a sound. Figure 2b shows the output of an eight-channel CIS strategy in response to a vowel having an F0 of 100 Hz. Although some channels have outputs that are modulated at this rate, those modulations are shallow and their peaks are not aligned. Furthermore the CIS output provides no information on the ‘temporal fine structure’ (TFS) – the faster fluctuations that occur within each 10ms period of the waveform.

To overcome these limitations, novel strategies have either enhanced and aligned the modulations occurring at the F0 rate, or encoded TFS information on a subset of electrodes. For example, MedEl’s ‘fine structure’ strategies output a burst of pulses time-locked to the zero-crossings at the output of the lower-frequency channels (MedEl, Innsbruck, Austria). An excellent review of the established and novel strategies is given by Wouters et al[1]. Generally speaking the benefits to speech and pitch perception have been modest and variable. One reason for this is that there appears to be a biological limitation on temporal processing by CI users.

If one bypasses the speech processor and presents a very simple stimulus, such as a single pulse train presented to one electrode, pitch perception is still usually much poorer than in normal hearing. At modest rates, such as 100 Hz, CI users can often only detect rate changes of about 20%, and, above about 300 Hz, increases in pulse rate often fail to produce any detectable change in pitch. As is common in CI research, there is a very large amount of between-listener variability in performance, and this may at least partly be due to differences in neural survival.

From the first two parts of this article it will be apparent that there is at present no ‘one size fits all’ solution that universally improves hearing by all CI patients. One reason for this may be differences in the health of the auditory nerve and/or more central auditory neurons. For example, psychophysical measures show that a subset of patients do show benefits of focussed stimulation, and some patients show good performance on temporal processing. It is tempting to speculate that these same patients have good neural survival and might benefit from focussed stimulation and/or speech processors that provide enhanced modulation or fine-structure information.

An interesting recent development comes from evidence that performance on psychophysical tasks can vary substantially across electrodes even for a single patient. This has led to the idea that performance on speech tasks might be improved by re-programming or disabling certain electrodes. For example, one study showed an improvement in speech perception when disabling electrodes having poor modulation detection thresholds [2]. Another recent report demonstrated improved speech perception in quiet and noise by disabling electrodes with high detection thresholds for low-rate pulse trains [3].

This technique of ‘bespoke programming’ holds promise for improving CI outcomes even in the absence of a one-size-fits-all solution. Important milestones will be determining the physiological bases of these benefits and developing fast objective methods for identifying ‘problem’ electrodes. As a step towards this latter goal two recent papers have demonstrated methods for using evoked auditory-nerve potentials to measure neural excitation patterns [4,5]. One of these, from our laboratory, is capable of identifying anomalous excitation patterns such as might arise from cross-turn stimulation [4].

Finally, it is worth sounding a note of optimism on the potential benefits of focussed stimulation and novel processing strategies that enhance or preserve temporal information. At present the effects of these manipulations are muted by a biological bottleneck that limits the amount of information that can be conveyed to the brain. If successful, attempts to improve neural survival throughout the auditory pathway are likely to unlock the potential of these new methods, leading to even greater benefit for CI patients [6]. 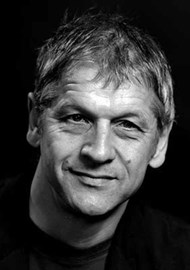