Musical perception and the brain: In conversation with Charles Limb
Interviewed by Declan Costello

One of the unique aspects of BACO 2020 will be a public engagement event. Charles Limb, an esteemed guest lecturer from San Francisco, will delve deep into the neurological experience of music. Who better than our very own Declan Costello to explore this fascinating topic?

BACO 2020 is being held in the ICC in Birmingham, which opened its doors in 1991. One of the most striking areas of the ICC is Symphony Hall, which is home to the City of Birmingham Symphony Orchestra. Past conductors of the orchestra include Sir Simon Rattle, and the current music director is the young (and, unusually for an international orchestra, f emale) Lithuanian Mirga Gražinytė-Tyla. The concert hall hosts a wide array of music, and is famous for its acoustics, which are said to be the best in the UK.

So it is fitting that BACO 2020 will feature a lecture by Professor Charles Limb, who is an ENT surgeon based in University of California, San Francisco (USCF), and is also a musician with a significant interest in neuroscience. His particular area of expertise (and subject of his TED talks) is in relation to musical perception (and performance) and the brain. 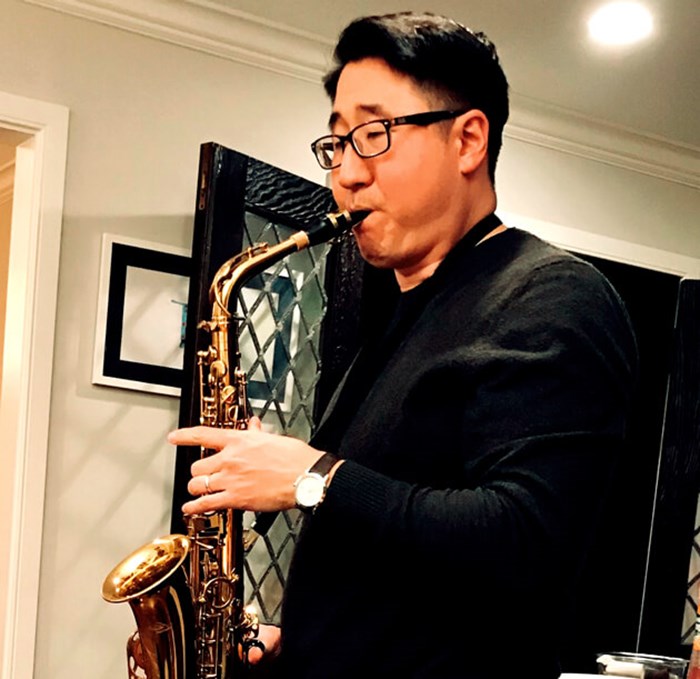 Charles Limb on the saxophone; one of the many instruments he plays.

For his talk, he will be joined by a group of jazz musicians, who will illustrate his talk with live improvisation, narrated and directed by Charles, outlining the neurological processes going on in the musicians’ brains. It promises to be a fascinating evening. The lecture will be open to the public, musicians and the wider community, and forms part of BACO 2020’s commitment to public engagement. I caught up with Charles on a Skype call recently to discuss his interest in this area…

Charles, we are all really looking forward to your talk on ‘Musical creativity and the brain’ at BACO in July. Can you give us some background as to your own musical training?

I have played music my whole life, starting since early childhood, but never played professionally. I consider myself extremely addicted to music, and although I am primarily a jazz saxophonist, I do play some other instruments (piano, bass, guitar). My house is littered with musical instruments, and I have a recording studio setup in my basement. When I’m not doing medicine or science, you can pretty much find me playing music!

How did you come to be interested in the neurological aspects of musical experience and performance?

Due to my deep interest in music, I had always hoped for a career that would inspire that same level of conviction that music did for me, and I found it in medicine. Somehow in medicine, I felt that my interests in music – why I cared about it, what it taught me – were brought to an incredibly pragmatic, real-world state when I entered the hospital. When I learned that there was a field where I could study hearing, it seemed like a natural choice. When I realised how little we knew about the biology of musical experiences, I decided that I would start trying to examine this field. When I studied functional MRI and realised that you could study some really complex musical experiences, I decided to begin studying neural correlates of musical improvisation.

“I had always hoped for a career that would inspire that same level of conviction that music did for me, and I found it in medicine”

You are well known for your TED talks – can you tell us how public engagement in medicine and science has been important to you? How do you think that we as a medical profession can engage meaningfully with the public?

In the end, I believe that science and medicine should help the world in some way, usually by making the lives of people better. From a science perspective, it is not always entirely clear what the implications of a finding will be many years down the road, and so I try to steer clear of providing too many ‘take home points’. On the other hand, if I can’t give a person listening to me even one simple way to understand what we are observing, then I also believe that’s an equivalent failure. Although I never intentionally set out to engage the public, it sort of happened naturally as a result of the work, which I think appeals to people from a wide range of backgrounds. Today I believe that if we do not engage the public meaningfully, we are partially failing in our roles as physicians.

The UK and the US ENT communities have a long and happy history of collaboration – do you have any contacts with UK ENT surgeons?

Yes, but not very many – I would gladly continue the collaborations!

Who are your musical idols?

I have had so many musical forms of inspiration, but I always try to remember that they were simply people, not deities or even necessarily people I would have wanted to know. On a strictly musical level, I feel so grateful to have listened to as many remarkable artists as I can, and I always lament that I will not have enough time in my life to listen to even a fraction of the music that I would like to. In terms of specific musicians whose music has shaped my life, John Coltrane, Gustav Mahler, Prince, Björk, and David Bowie come to mind, just to name a few! And the list of performers who have indelibly affected me goes on for quite a while...

How frequently do you get to perform these days?

Rarely! I play in a casual jazz quintet composed mostly of physicians; it’s extremely fun but we don’t play out often. I also spend a good amount of time writing songs in my home studio, and I am working on my own album for the next year!

“Today I believe that if we do not engage the public meaningfully, we are partially failing in our roles as physicians”