Radiology and sinus disease: “the ever-evolving landscape”
By Curtis Offiah

Computed tomography (CT) remains the imaging modality of choice in assessment of patients with symptoms of chronic rhinosinusitis resistant to conservative treatment. In the last 10 years, CT technology has seen significant advances with the development and integration of multi-detector (multi-slice) technology allowing faster scans with much improved resolution heralding significant improvement in the resolution of multiplanar image reconstructions. This has proved particularly pertinent to imaging assessment and preoperative planning of the complex and variable sinonasal architecture especially in relation to the main sinus drainage pathways.

As a result, in an attempt to keep step with the progress made in functional endoscopic sinonasal surgery (FESS), CT reconstructions can provide much greater detail of the anatomy and disease affecting not only the ostiomeatal complex, but also the frontal recess and the sphenoethmoidal recess. All of this information can now be retrieved from a single axial volume CT acquisition through the sinonasal region.

CT reconstructions of all three orthogonal planes – axial, coronal and sagittal - can be rendered from the axial CT source dataset for appropriate radiological assessment of disease extent, normal variant anatomy and potential surgical hazards in the ENT surgeon’s preoperative planning for FESS.

The wide array of normal variant sinonasal anatomy which may both potentiate chronic sinus inflammatory disease and prove a focus for or a hindrance to FESS are exquisitely depicted on high resolution reformats of the sinonasal region facilitated by multislice CT technology. In particular, the variant frontal recess air cells can be accurately interpreted by the ENT surgeon on such imaging. Potential sites of surgical complication such as Onodi air cells, variant cavernous segment internal carotid artery anatomy or dehiscent sphenoid sinus walls adjacent to the internal carotid arteries can all be pre-empted and anticipated at endoscopic surgery.

Radiation dose remains a major concern in a population that includes a large number of young patients. CT is a relatively high dose examination, however, the high natural contrast between air, mucosa and bone enables optimisation of low dose protocols; this results in considerable decrease in the eye-lens dose without significant reduction in diagnostic information. Nevertheless, radiation dose is higher with multislice CT technology and this needs to be borne in mind, particularly where repeat cross-sectional imaging may be required in patients with recalcitrant disease.

Cerebrospinal fluid (CSF) rhinorrhoea not infrequently presents to the ENT surgeon. Attention should be directed clinically and radiologically to the anterior skull base. The cause of the CSF rhinorrhoea, if active, may be interrogated using CT cisternography. In this technique, contrast medium is injected into the CSF, typically of the lumbar thecal sac through a lumbar puncture. High resolution CT imaging of the anterior and central skull base is then performed to identify a potential site of CSF leak. Multislice CT has greatly enhanced the radiological assessment of the anterior skull base through its improved resolution and improved high resolution multiplanar reformatting capabilities (Figure 1). 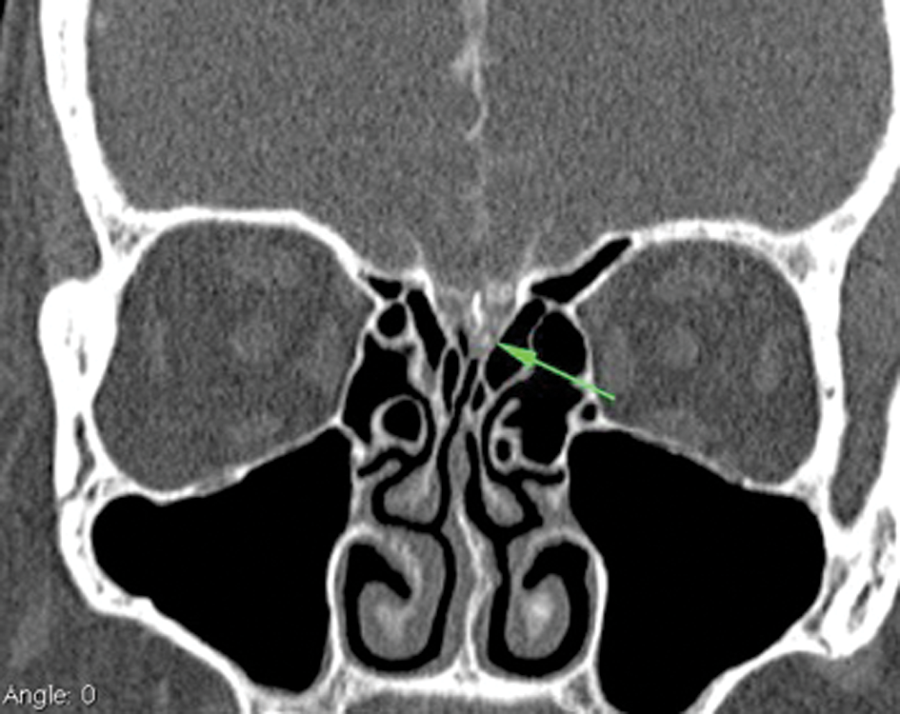 Figure 1: CT cisternography of a patient with active CSF rhinorrhoea: coronal reformatted image from multislice axial CT volume acquisition. The high density contrast medium within the CSF subarachnoid spaces of the subfrontal brain parenchyma and the anterior interhemispheric fissure can be seen. The anterior skull base defect in the left mid-cribriform plate with associated contrast extension identifies the site of the CSF leak (arrow). This was successfully closed endoscopically.

Magnetic resonance imaging (MRI) is an imaging modality utilised infrequently in the assessment of chronic rhinosinusitis. However, its role becomes essential where there is concern for intracranial complications secondary to acute or chronic sinus inflammatory disease or where there is concern for the presence of sinonasal neoplasia. Chronic rhinosinusitis is a common presentation in the immunocompetent population. However, certain immunocompromised patient groups are at significant risk of aggressive infective aetiologies centred in and around the paranasal sinuses which can extend intracranially. A high index of suspicion for aggressive invasive fungal sinusitis is recommended in patients with acute myeloid leukaemia or poorly controlled insulin-dependent diabetes mellitus for example and, as such, the threshold for MRI assessment of such patients should be low. High-morbidity and high-mortality complications such as cavernous sinus thrombosis, internal carotid artery occlusion or pseudoaneurysm formation, brain parencymal infarction and haemorrhage can develop secondary to the invasive fungal infection. The fungal infection can also directly affect the bony architecture of the sinonasal region with resultant bone necrosis. It is therefore imperative that the infection is recognised early and treatment initiated (Figure 2). 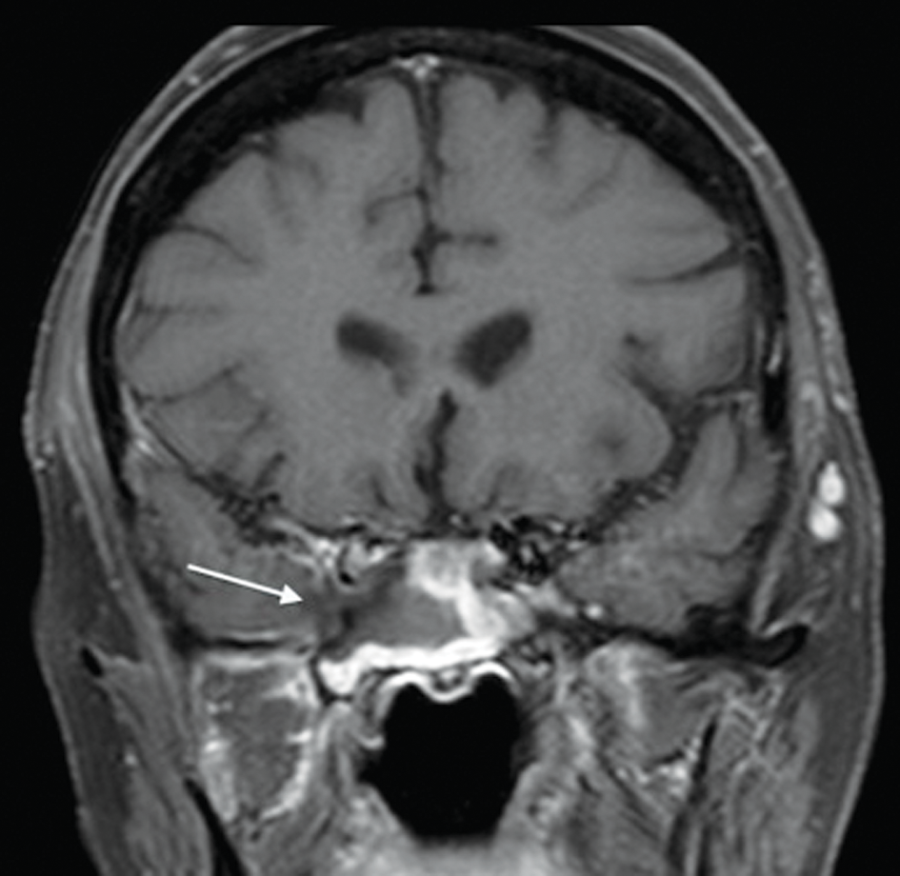 Sinonasal neoplasia requires CT and MRI assessment. The anatomical location of the sinonasal architecture at the interface with the intracranial compartment and the intraorbital compartment makes the utilisation of both imaging modalities imperative as each modality offers its own particular advantages. Sensitivity and specificity for intracranial extension (and, in particular, leptomeningeal invasion in the absence of frank brain parenchymal invasion) and intra-orbital extension (and, in particular, for example, tumour breach of the periorbita) are greatly increased by the utilisation of both imaging modalities.

In patients requiring multiple cross-sectional imaging assessments of the paranasal sinuses for benign inflammatory disease over the course of a number of years, the issue of radiation exposure becomes more salient. MRI assessment of the paranasal sinus can be an alternative in such cases especially with the implementation of some specific established sequences such as T2 turbo spin echo sequences, fat-saturated T1-weighted sequences or newer sequences such as 3D SPACE or 3D MP-RAGE type sequences (Siemens). While not offering the same level of anatomical detail as the faster and less artefact-susceptible CT imaging modality, MRI in chronic rhinosinusitis can prove valuable in selected patients in whom conservative treatment surveillance as opposed to preoperative planning is the main objective, particularly in those patients who have undergone a significant number of CT sinus assessments in the past, in the young patient or in the patient in whom surgical intervention is not anticipated clinically.

In a similar vein to the surgical management of benign (and malignant) sinus disease, cross-sectional radiological imaging assessment of such disease has seen a number of key advances over the last decade both in terms of the introduction of multislice CT technology and the development and adaptation of newer MRI sequences. However, the continued collaboration between the ENT surgeon and the radiologist should remain the immoveable constant within this ever-evolving landscape. 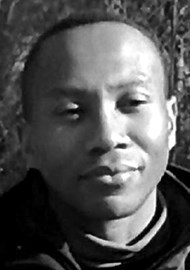